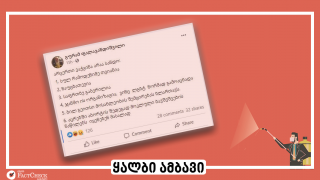 The leader of the Georgian Idea socio-political movement, Guram Palavandishvili, promoted disinformation in regard to the COVID-19 vaccine via a social network. Mr Palavandishvili’s Facebook publication on COVID-19 and vaccination contains the most widespread falsehoods based on which he attacks the vaccine as untrustworthy.

None of the vaccines are trustworthy:

1. They provide protection for several months only.

2. They are hastily made.

3. The threat is overblown.

4. The WHO is the organisation which declared LGBT to be a norm.

5. Bill Gates is plotting the reduction of the population.

6. Foetal cells of aborted children are used as vaccine ingredients.

Claim: None of the vaccines is trustworthy since the COVID-19 vaccines only provide protection for several months.

Verdict: FactCheck concludes that the aforementioned claim is a MANIPULATION WITH FACTS.

Of note is that the only real instrument to curb the pandemic is mass vaccination. Although it is still unknown how long vaccinated people will keep their immunity, vaccination is vital in order to break the infection transmission chain. Generally, “collective immunity,” popularly known as “herd immunity,” is needed to cope with the pandemic. Such immunity is acquired with mass immunisation or recovering from the infection. However, the World Health Organisation (WHO) supports vaccine-acquired collective immunity since it enables the avoidance of mass fatalities.

Claim: The COVID-19 vaccines were made in a short period of time and, therefore, they are untrustworthy.

As stated by Guram Palavandishvili, “none of the vaccines is trustworthy… since they are hastily made.” The COVID-19 vaccines (in speaking about the COVID-19 vaccines, we refer to those being authorised by international regulators such as BioNTech/Pfizer, Moderna and Oxford/AstraZeneca) have indeed been made and approved within a tight timeframe, although none of the phases which determine the efficacy and safety of the vaccines has been omitted.

Generally, vaccines have to undergo pre-clinical trials and three phases of research prior to approval. At the pre-clinical stage, the vaccine is tested on animals and scientists observe whether or not the animals generate an immune response. At the first stage of the clinical trials, the vaccine is given to a small group of people in order to understand the vaccine’s safety and the immune response it generates. At the second stage, the vaccine is given to hundreds of people where scientists can also collect additional information about the vaccine. At the third stage, thousands of people are vaccinated and the vaccine’s efficacy, safety and side-effects are tested. If a vaccine fails to prevent a disease or shows that it is hazardous to health or has strong adverse effects, the trials are stopped. A respective authority of a country or a group of countries approves the vaccine based on the trials (which determined the vaccine’s safety and efficacy) whilst the vaccine monitoring and information gathering about any side effects continue after the vaccine’s approval. If a vaccine is authorised, this means that it successfully passed all of the stages of the trials and its safety and efficacy are proven by research studies.

On 16 March 2021, the EU’s chief regulatory authority, the European Medicines Agency (EMA), stated that currently there was no indication that vaccination causes blood clots. At the same time, the EMA is firmly convinced that the vaccine’s benefits outweigh the risks of adverse reactions. The number of thromboembolic events among vaccinated people is less as compared to thromboembolic events among the general population. On 18 March 2021, the EMA also stated that based on trials, the COVID-19 Oxford/AstraZeneca vaccine is “safe and effective.” See FactCheck’s articles (link 1, link 2 and link 3) for more information about the AstraZeneca vaccine.

Claim: The COVID-19 pandemic is overblown.

Verdict: FactCheck concludes that the aforementioned claim is FAKE NEWS.

Guram Palavandishvili stated that the “threat is overblown.” The threat coming from COVID-19 has been vigorously discarded since the very outbreak of the pandemic. The disinformation purveyors claimed there was no need to declared the pandemic and that COVID-19 is similar to the flu and the numbers of those infected and those deceased have been manipulatively increased.

In fact, the World Health Organisation provides the following definition of a pandemic: “An epidemic occurring worldwide, or over a very wide area, crossing international boundaries and usually affecting a large number of people.” The WHO’s definition does not include any numerical threshold whose passing would render the declaration of a pandemic as legitimate. According to the WHO, the declaration of a pandemic is warranted if the new virus is close to reaching the so-called sixth phase which is when the virus is spreading rapidly and includes at least one other country in a different WHO region in addition to the criteria defined in the fifth phase.

In regard to the comparison of COVID-19 with other already existing and often much weaker viruses, this is outright wrong. COVID-19 is an infectious diseases caused by the novel coronavirus (SARS-CoV-2). At this stage, this is a much more dangerous disease as compared to flu. Given the COVID-19 pandemic being in its active phase, it is hard to have a precise mortality ratio and this would only be possible after the pandemic ends. However, according to a study published in the Canadian Medical Association Journal, the risk of death from COVID-19 was 3.5 times higher than from most of the influenza strains. The studies carried out in England and Wales demonstrated that COVID-19 is three times as fatal as either influenza or pneumonia. According to the study on the comparison between the lethality of COVID-19 and influenza carried out in a Dijon hospital in France, the COVID-19 mortality rate is three times higher as compared to that of influenza. Moreover, the coronavirus spreads much more rapidly as compared to influenza. As of 22 March 2021, there were 123,902,672 confirmed cases in the world of which 2,728,634 have died.

Fake news on the COVID-19 death toll in the USA started to be disseminated as early as spring 2020 and it was investigated by the FactCheck.org, a trusted fact-checking source. According to FactCheck.org, although hospitals are paid more for treating coronavirus-infected patients, none of the medical facilities were found to be manipulating the statistics of the number of COVID-19 infections or deaths. At the same time, WHO officials stated at the beginning of September 2020 that the COVID-19 death toll figures were not manipulatively inflated but most likely are lower as compared to the real scale of the pandemic-caused human loss.

Claim: The World Health Organisation is not trustworthy since it declared LGBT as a norm.

Verdict: FactCheck concludes that the aforementioned claim is a MANIPULATION.

Guram Palavandishvili’s claim that vaccines are untrustworthy since they are backed by an organisation such as the WHO is a manipulation. The WHO did indeed remove homosexuality from the International Classification of Diseases. Prior to that, the American Psychiatric Association (APA) removed homosexuality from the list of mental disorders. Authoritative scientific sources agree that homosexuality is not a disease. Mr Palavandishvili’s statement is homophobic and his attempt to link the trustworthiness of the vaccine to the aforementioned fact is absurd and illogical.

Claim: The COVID-19 vaccine is untrustworthy because Bill Gates plans to reduce the population.

Verdict: FactCheck concludes that the aforementioned claims is FAKE NEWS.

Guram Palavandishvili stated that “none of the vaccines is trustworthy… because Bill Gates plots to reduce the population. This claim is not true and aims to deliberately distort the context of one of Mr Gates’ statements. In fact, Bill Gates highlights the necessity of the timely invention of the needed vaccine which in turn will address the overpopulation issues in developing countries.

In February 2011, Bill Gates delivered a speech at a TED conference and talked about zero carbon emission plans. Instead of depopulation, Mr Gates was in fact referring to the regulation of the population growth rate which would be possible with the invention of needed vaccines and the creation of functioning healthcare systems. The reasons behind having large families with many children in developing countries are the needs for large workforces and the nascent healthcare systems. As developing countries lack access to functioning healthcare systems, there is higher child mortality because of the lack of vaccines which in turn results in societies with large families with many children. Bill Gates stated that the invention and delivery of vaccines to vulnerable groups will save the lives of many children which would eliminate the need to have large families within the reality of economic and healthcare challenges.

Verdict: FactCheck concludes that the aforementioned claim is FAKE NEWS.

Guram Palavandishvili’s claim that the vaccine contains the cells of aborted children is false. AstraZeneca uses cloned versions of human embryonic kidney (HEK293) cells which no longer feature in the final product. In particular, HEK-293 cells are cell lines of embryos aborted in the 1970s where pregnancy was not terminated artificially for medical reasons. At the same time, the cells which are used for vaccine production (referred to as a genetically modified Human Embryonic Kidney - HEK) are not original cell lines but cloned versions which were artificially reproduced. There could be endless cloned versions from one cell line. These cloned cells are used to make a vector vaccine since particular cells provide a favourable habitat for the multiplication of the antigens needed for the vaccine. Of note is that the product is filtered in the production process and the final vaccine does not contain cloned cell materials.

These cell lines are widely used in medicine and the pharmacological industry; in particular, for cancer research. This helped scientists create vaccines for MMR, chicken-pox, hepatitis A and medications to treat rheumatic arthritis, haemophilia and cystic fibrosis.

Given the aforementioned circumstances, Guram Palavandishvili’s claims on the coronavirus and the COVID-19 vaccines constitute deliberate disinformation which lacks any solid ground.