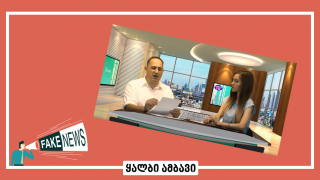 On 20 July 2021, Georgian TV aired an anti-vaxxer broadcast of disinformation content. The TV anchor, Maka Bregadze, and her guest, Giorgi Liluashvili, voiced numerous disinformation messages in regard to COVID-19 vaccines. Apart from promoting false information vis-à-vis the vaccines, they were directly urging people not to get vaccinated. Such calls and disinformation messages amid the pandemic, when the confirmed cases in the country have reached their peak, are dangerous for people’s health and life.

Claim: If children over 16 are not fully vaccinated, they will be banned from schools.

Georgia allows the vaccination of individuals 16 years of age and older with the Pfizer COVID-19 vaccine. In the cases of the other vaccines, the age limit for vaccination is 18.

According to the information of the Ministry of Healthcare of Georgia and the National Centre for Disease Control (NCDC), information about making COVID-19 vaccines mandatory for children and about specific penalties (being banned from the schools) is fake news.

Claim: These vaccines were intended for Alpha variants. The virus has mutated and, therefore, these vaccines will actually have more side effects, let alone being effective.

The SARS-COV-2 virus has been mutating over time and new variants are starting to emerge. The first mutated variant was the British variant (Alpha variant). Currently, the Delta variant (the so-called Indian variant) is dominant across the world. COVID-19 vaccines have lower efficacy vis-à-vis the new variants, although their protection level from severe illnesses and fatality is still high which is proven by relevant studies.

A study in Israel showed that those who are fully vaccinated have only a 40.5% chance of avoiding symptomatic COVID but an 88% chance of avoiding hospitalisation due to the disease whilst the vaccines are more than 91% effective at preventing severe cases.

A study in England showed that fully-vaccinated people have around a 50% to 60% reduced risk of infection from the Delta coronavirus variant.

Bidzina Kulumbegov, an allergist-immunologist, in his interview with FactCheck, stated: “All the authorised vaccines (including Sinopharm and SinoVac) protect from severe cases and death vis-à-vis all variants. If we take a look at the trend among vaccinated people, where there are growing infection numbers with new variants, the level of protection from hospitalisation and mortality is around 80%-90%.”

Claim: Vaccinated people have/may have fertility problems… When these vaccines were introduced, there was a direct instruction to freeze sperm.

Items of fake news on vaccines causing infertility or sterility have been constantly promoted. Potential infertility is not among any of the vaccines’ side effects. In addition, there are no calls in the annotation of any vaccine authorised by international health institutions to freeze sperm.

As stated by the British Fertility Society and the Association of Reproductive and Clinical Scientists, there is absolutely no evidence, and no theoretical reason, that any of the vaccines can affect the fertility of women or men.

According to the information of the US Centre for Disease Control, there is no evidence that COVID-19 vaccination causes any problems with pregnancy. Vaccines, including COVID-19 vaccines, do not cause fertility problems (see FactCheck’s article on this topic).

Claim: There is no information about the ingredients of the vaccines.

Information about the authorised COVID-19 vaccines and the mechanism as to how they work has been published in detail.

There are several types of COVID-19 vaccines. The mRNA vaccines (Pfizer/BioNTech and Moderna) contain not a fragment of a virus or its protein but informative; that is, messenger RNA which carries spike protein information. After the injection of the vaccines, an individual’s immune system starts to produce spike protein which is recognised by the immune system and an immune reaction – the generation of antibodies – is started.

Vector vaccines (such as AstraZeneca) use other harmless viruses (vectors) which carry information to the human cell vis-à-vis the coronavirus spike protein. [1] According to the information delivered by the vector, a cell starts to produce the harmless part of the virus – the spike protein – which is recognised by the human immune system and antibodies are generated in response.

The detailed ingredients of mRNA and vector COVID-19 vaccines are reviewed in FactCheck’s article.

Inactivated vaccines (Sinopharm, SinoVac) are vaccines produced by a traditional method. These types of vaccines contain a virus fragment. The virus is inactivated by a chemical compound where a small amount of an aluminium-based adjuvant is added which stimulated the immune system. These vaccines teach the immune system to produce antibodies against the SARS-COV-2 virus (see FactCheck’s article about the Sinopharm vaccine).

Claim: The objective of the vaccination is to reduce the world’s population from 7.5 billion to 1.5 billion.

COVID-19 vaccines significantly reduce the risks of severe diseases and mortality in the case of being infected with the coronavirus. Therefore, the only objective of the vaccines is to save lives and not the opposite.

Disinformation that the aims of the vaccines are to reduce the world’s population has been promoted multiple times amid the pandemic. The incorrect interpretation of Bill Gates’ words is provided as evidence of this conspiracy theory.

Founder of Microsoft, Bill Gates, talked about reducing the world’s carbon emissions to zero at a TED conference in 2011. Bill Gates clarified the major factors which determined the level of carbon emissions in the world which include the world’s population. He stated: “The world today has 6.8 billion people. That’s heading up to about nine billion. Now, if we do a really great job on the new vaccines, health care and reproductive health services, we could lower that by, perhaps, 10 or 15 percent.”

The claim that Bill Gates’ aim is to reduce the population with vaccination is fake news. Bill Gates speaks about slowing down the population growth rate and not about the reduction of the population. In addition, he makes emphasis on the timely invention of necessary vaccines which would reduce child mortality in developing countries and, in turn, slow down the population’s growth rate. As we know, the trend of having many children in developing countries is stipulated by the need for a large workforce in parallel with underdeveloped healthcare services (see FactCheck’s article on this topic).

[1] A spike protein is a protein on the surface of the COVID-19 virus which the immune system recognises as alien and starts producing antibodies against it.