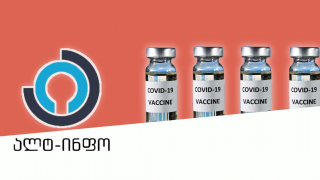 Alt-Info promotes manipulative and disinformation messages about the COVID-19 vaccines. In particular, the founder of Alt-Info, Zurab Makharadze, stated: “They made some vaccine in six month, the whole of Israel gets vaccinated and now they have a wave again, meaning it does not work. This is an experimental medication... It has not undergone all the necessary trials and was produced under a force majeure.”

Claim: “They made some vaccine in six months… This is an experimental medication… It has not undergone all the necessary trials and was produced under a force majeure.”

COVID-19 vaccines were developed and approved in a short period of time. None of the trial phases which determine the efficacy and the safety of the vaccines, however, have been omitted. In addition, an authorised vaccine is under no circumstances an experimental one.

There was an unparalleled mobilisation of technological, financial and human resources globally to produce COVID-19 vaccines amid the pandemic. As a result, vaccines were created in a very short time as compared to standard timespans.

An authorised vaccine means that that vaccine efficacy and safety is proven by relevant trials. Vaccines are given emergency use authorisation only after the successful completion of all three phases of clinical trials.

A vaccine has to undergo pre-clinical trials and three phases of clinical trials. At the pre-clinical phase, the vaccine is first tested on animals in order to evaluate its potential to invoke an immune response. Afterwards, three-phased clinical trials begin. In the first phase of the clinical trial, the vaccine is given to a small number of volunteers. In the second phase, the vaccine is given to several hundred volunteers in order to enable scientists to obtain further assessments on vaccine safety and potentially to invoke an immune response. In the same phase, another group of individuals who were not vaccinated, also gets involved in the trials in order to determine whether changes in the group of vaccinated volunteers is a result of the vaccine or if it is accidental. In the third phase, the vaccine is given to thousands of volunteers and a comparison is made with volunteers from a similar group who did not receive a vaccine but a comparable product (placebo). On this basis, the vaccine’s efficacy vis-à-vis the relevant disease is determined and vaccine safety studies begin on a much larger group of humans. The third phase of trials is carried out in different countries and different locations within a country to confirm that findings about the vaccine safety can be applied to different groups of the population.

COVID-19 vaccines have successfully completed all of the aforementioned phases and were respectively granted an authorisation. Further monitoring continues after authorisation and vaccination programme roll-out whilst national health authorities and the World Health Organisation constantly monitor any side effects of a vaccine.

Claim: The whole of Israel gets vaccinated and now they have a wave again, meaning it does not work.

Currently, the Delta variant (the so-called Indian variant) is becoming dominant across the world. There are rising numbers of confirmed cases, including among vaccinated people. COVID-19 vaccines have a lower efficacy vis-à-vis the new variants, although their protection level from severe illnesses and fatality is still high which is proven by relevant studies.

If we take a look at Israel’s example, confirmed cases are on the rise, although the mortality rate is basically unchanged owing to a strong vaccine roll-out. There are one or two cases of death per day on average in Israel.

Bidzina Kulumbegov, an allergist-immunologist, speaking about this manipulation in his interview with FactCheck, stated: “All the authorised vaccines (including Sinopharm and SinoVac) protect from severe cases and death vis-à-vis all variants. If we take a look at the trend among vaccinated people, where there are growing infection numbers with new variants, the level of protection from hospitalisation and mortality is around 80%-90%.”