The Government of Georgia has depreciated GEL to a historic minimum and increased fuel prices as much as possible. You have not increased pension with at least GEL 1, whilst you promised to increase pensions substantially. Instead, you are giving pay rais

Mostly False
In the statement is the elements of the truth, but the important facts that could have made other impressions
Facebook Linkedin Twitter Print
Verdict: FactCheck concludes that Nika Melia’s statement is MOSTLY FALSE. Resume:

GEL exchange rate against USD peaked at the end of 2016 and reached 2.76 mark. In that period, USD index registered a growth, which was reflected upon global appreciation of USD against every other currencies of the world. Therefore, the Government of Georgia was devoid of any possibility to completely eliminate impact of USD appreciation and keep GEL exchange rate at the existing level. Difficult situation within the region in general and in partner countries has negatively impacted currency inflows as well as GEL exchange rate. The Government of Georgia was unable to seriously influence external factors affecting GEL exchange rate, although its certain actions (low economic growth rate, restricted visa regime with number of countries, unequal spending of state funds etc) significantly contributed to creation of some additional pressure against GEL exchange rate. Therefore, that part of the politician’s statement is mostly false.

Changes in GEL exchange rate against USD is reflected upon fuel prices. Even though fuel price in Georgia was more or less following the trend of changes in fuel prices across the world market, it still was not changing in similar proportion. This is because fuel import was getting expensive in that period as a result of GEL depreciation. However, since 2017, fuel prices in Georgia started to part ways with trends in oil prices at the world market which was caused by raise in excise tax rate in the same year. Immediately after raising excise tax, fuel prices increased by GEL 0.46 and of that amount, actual portion of excise tax is approximately GEL 0.18-0.22. In the past years, the lowest price on fuel was registered in July-December 2016, when average fuel price was GEL 1.75. The highest average price on fuel is registered this year.

In regard to salaries of “high-ranking officials”, salaries of MPs has been increased by GEL 833 since 2018, whilst pay rise for state-level and political officials has been restricted by law. In addition, according to the same law, those individuals were forbidden to receive bonuses/supplements. Further, total labour remuneration to GDP ratio is decreased in 2018, whilst taken in absolute numbers there is no significant growth.

Georgian MP, Nika Melia, has talked about Georgian Dream’s performance. The MP stated that the Georgian Dream depreciated GEL to a historic minimum and increased fuel prices. At the same time, Nika Melia claimed that the Government of Georgia had promised to increase pensions but they failed to do so in 2018, whilst high-ranking officials all over the country were given a pay raise in the amount of GEL 700-800. 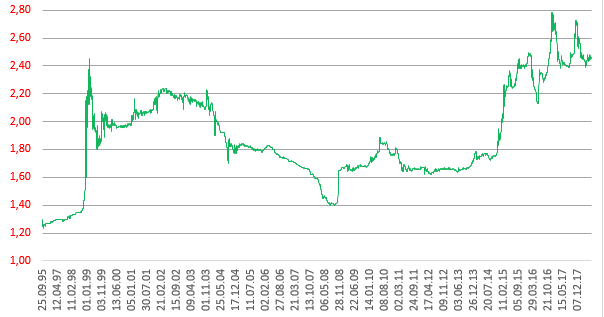 Speaking of reasons of GEL depreciation of note is USD index change impact upon GEL exchange rate. That index (DXY) indicates value of USD against the world’s six leading currencies. When index rises, USD appreciates and vice versa, when index declines USD undergoes depreciation. Usually, independent from Georgia’s other macroeconomic factors growth of USD index should result in GEL depreciation and when DXY decreases GEL is supposed to appreciate.

Source: Board of Governors of the Federal Reserve System (US);  National Bank of Georgia 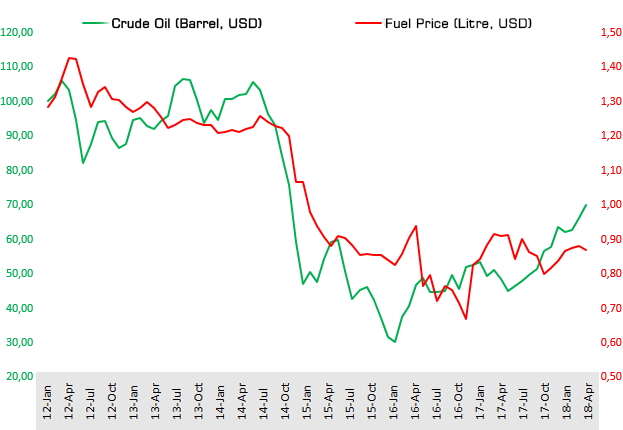 To summarize discussion on fuel prices, it needs to be added that rise in fuel prices is mostly related to increased oil prices at the world market. However, the Government of Georgia again has its own share in making fuel prices more expensive. As we have already mentioned, this is because of rise in excise tax rate in 2017, which increased fuel prices by nearly GEL 0.18-0.22.

In regard to pensions, old age pension in 2012 was GEL 110 and GEL 125 respectively. After change of government, pension increased multiple times. In 2013, pension for every pensioner increased to GEL 125 which was later reached GEL 150. In 2015, pension was increased by GEL 10 (up to GEL 160) and since July 2016, old age pension has been GEL 180. Since then, pension has not been increased. However, pensions for pensioners who live in mountainous areas have been increased to GEL 2016 since September 2016.

about that fact in 2016 too. Therefore, Nika Melia’s pretension in regard to pensions is mostly legitimate.

[1] Graph is drawn based on monthly average prices
თეგები: