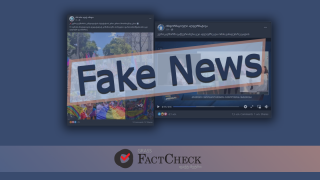 Disinformation: “Holding Gay Parade is one of the Requirements to Obtain EU Candidate Status.”

On 17 June 2022, the EU Commission’s decision to support granting candidate status to Ukraine and Moldova, whilst giving specific recommendations to Georgia, sparked massive disinformation and propaganda. The pro-Russian TV Alt-Info and supporting Facebook accounts claimed that one of the requirements to obtain EU candidate status is to hold a “gay parade.”

Similar to the previous year, there is a surge in disinformation, propaganda and hate speech in light of the forthcoming Tbilisi Pride Week. Violent groups promote disinformation that one of the major criteria to obtain EU membership/candidate status is to hold “gay pride.” In order to prove their claim, these groups refer to Moldova Pride which was held in Moldova’s capital of Chisinau which was ostensibly one of the requirements for candidate status which Moldova was granted on 17 June 2022.

In regard to the recommendations in particular, they consist of 12 priorities (see all 12 points) and one of them pertains to vulnerable groups: “Move swiftly to strengthen the protection of the human rights of vulnerable groups, including by bringing perpetrators and instigators of violence to justice more effectively.”

Therefore, the claim that one of the requirements for obtaining EU candidate status is holding LGBT pride, which was ostensibly proven by Moldova’s example, is a lie. Propaganda regularly exploits this issue to discredit the EU and Western orientation. In fact, the European Commission demands that the rights of all citizens in Georgia should be respected whilst those who committed hate motivated attacks against peaceful citizens and encouraged violence should be brought to justice.

Of note is that one of the problematic aspects of the so-called 5 July Case is improper/insufficient investigation of the incidents from law enforcement. This is indicated by the reports of the Public Defender and NGOs involved in this case.

The Public Defender studied footage released by media sources and considers that the publicly available evidence reaches the standard of probable cause for launching criminal proceedings against two persons for organising group violence as well as for publicly calling for violence. In addition, the Public Defender opines that the violence had more than two organisers which is clear from materials available from open sources, although the investigation needs additional evidence to launch criminal proceedings (see FactCheck’s article for more details).