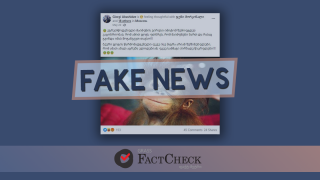 Disinformation: Spread of Monkeypox was Planned in Advance

A piece of disinformation was disseminated on Facebook that monkeypox was artificially spread. Disinformation sources linked the spread of monkeypox to the COVID-19 vaccines. One of the Facebook publications read: “There are more and more opinions that monkeypox was planned in advance… For instance, people started to recollect that the AstraZeneca coronavirus vaccine contains the chimpanzee adenovirus.”

The claim that monkeypox has been artificially spread and that this was planned in advance is groundless and untrue. Moreover, monkeypox has nothing in common with AstraZeneca.

Monkeypox is a zoonotic viral disease which is endemic to Central and Western Africa. It is mostly transmitted to humans from infected rodents and primates. Monkeypox is spread between humans by close physical contact with an infected person or by touching items that were previously in contact with the disease’s infectious rash or infected body fluids. Transmission is also possible through sexual intercourse.

According to the information of the World Health Organisation, monkeypox was first identified in humans in 1970 in the Democratic Republic of the Congo. There are two dominant virus strains – West African and Central African. The last big outbreak of monkeypox happened in 2017 in Nigeria. Cases of monkeypox are still confirmed in African countries. The transmission of the virus from African countries to non-endemic territory is also possible.

In 2003, there were over 70 confirmed monkeypox cases in the United States which was the first country outside of Africa where the monkeypox epidemic outbreak took place. In the previous years, there were isolated cases of monkeypox confirmed in Israel, the UK, Singapore and the USA which were related to travel to African countries.

In May 2022, monkeypox started to be transmitted to non-endemic territories. Therefore, it became the spotlight of global health attention. According to the WHO, if acting timely and swiftly, it is fully possible to contain the spread of virus in non-endemic countries.

At this stage, there is no danger of a monkeypox pandemic because monkeypox is transmitted more slowly as compared to other viruses (such as the coronavirus, human pox, measles and other infectious diseases). In addition, there are several monkeypox vaccines available which provide effective protection against the monkeypox virus. Furthermore, anti-viral medicine to treat this disease is also available for those who become infected.

Monkeypox is not a novel virus. It is endemic to Western and Central Africa and scientists have studied the nature of the virus. Specialists started to pay particular attention after the viral infection started to spread to non-endemic territories. The claim that its spread was planned in advance is false.

Another claim that the spread of monkeypox is related to the AstraZeneca vaccine is similarly absurd.

Monkeypox belongs to the Poxviridae family which is clinically similar to human pox, although less severe. Monkeypox has nothing in common with adenovirus, let alone the AstraZeneca vaccine.

As a matter of fact, Oxford/AstraZeneca’s COVID-19 vaccine is a viral vector vaccine. Vector vaccines use other harmless viruses (vectors) which carry the so-called “instruction” of the coronavirus spike protein in human cells. The cell, in line with the “instruction” provided by the vector, starts to produce a spike protein, a harmless part of the virus which is recognised by the immune system and starts to produce antibodies. In this case, the weakened adenovirus is used as viral vector which causes a simple cold. The modified virus does not multiply in human cells and poses no danger. Vector technology is a well-tested method.