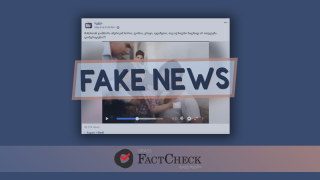 Video Footage from Syria is Manipulatively Disseminated on Facebook

Video footage was disseminated on Facebook where a crying man is hugging a little baby. There are other people as well in the footage. According to the Madli Facebook page, the footage features a Syrian man who lost his wife and children, although later found one of his children alive. This publication was re-posted by the Sekta Facebook page which sought to link it with US policy: “America razed Syria, Libya, Iraq and Afghanistan to the ground. Liberals, are people there not considered as people?”

In fact, the aforementioned footage was recorded in August 2013 in the Syrian town of Zamalka after Bashar Assad’s regime used chemical weapon against its own population.

On 21 August 2013, Bashar Assad’s government used chemical weapon near Damascus which killed 1,429 people including 29 children. The government fired missiles carrying the sarin chemical agent in Damascus and Damascus suburbs controlled by the opposition. According to the assessment of the Syrian opposition and other countries, including the EU member states, the attack was carried out by President Bashar Assad’s forces. Syrian and Russian governments deny this allegation. Moreover, the Russian government denounced the attack as the opposition’s “false flag” operation, ostensibly intending to have external forces join the war on the opposition’s side.

On 30 August 2013, the White House published a government assessment of the use of chemical weapons in Syria. The report assesses with high confidence that the Syrian government carried out a chemical weapons attack in Damascus against opposition elements. On 2 September 2013, France also published an assessment of the secret intelligence which concluded that Assad’s regime used sarin gas in attacks carried out on 21 August and in April as well.

Of note is that the aforementioned footage appeared in the Georgian media environment by different media agencies (link 1 and link 2) as early as in 2013.

Therefore, the footage was recorded precisely on 21 August 2013 after the Syrian government’s use of chemical weapons in the town of Zamalka near Damascus. Therefore, it has nothing to do with US actions.

As a reminder, the rebellion in Syria started on 15 March 2011 in light of the so-called Arab Spring wave which was later transformed into a civil war between the government and the opposition.