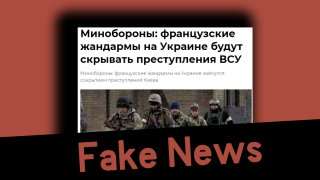 Disinformation: The goal of the team of French forensic experts is to hide war crimes committed by Ukraine

On 11 April 2022, Colonel-General of the Russian Federation’s Armed Forces, Mikhail Mizintsev, stated that a team of French forensic experts arrived in Ukraine to hide war crimes committed by Kyiv and lend credibility to allegations against Russia.

This statement of Mr Mizintsev is a continuation of the Kremlin’s propaganda which seeks to conceal Russia’s role in possible war crimes committed in the Kyiv region, especially in Bucha, and to put responsibility for those crimes on Ukrainian soldiers using ostensibly undisputable evidence.

In fact, what the Kremlin presents as evidence is only absurd allegations or fake news. Independent investigative teams, journalists, international organisations and leaders of the big powers blame Russia, not Ukraine, for committing possible war crimes based on visual evidence and witness testimonies (see FactCheck’s article for more details).

On 11 April 2022, the French Ministry of Justice released a statement about sending a team of French forensic experts to investigate war crimes committed in Ukraine: “Following the discovery of massive abuses reported on Ukrainian territory in areas previously occupied by the Russian forces, in particular in the town of Bucha, France is resolutely committed alongside the Ukrainians, its international partners and the courts to prevent impunity for those acts which constitute war crimes.”

The statement also says that France supports the investigation process launched by the International Criminal Court (ICC) within the context of the war in Ukraine: “Following the crimes committed in Bucha, a technical team from the Ministry of the Interior responsible for providing its expertise in terms of the identification and the collection of evidence for the Ukrainian authorities arrived in Ukraine this morning. In agreement with the Ukrainian authorities, it may also contribute to the ICC investigation.”

The team of French forensic experts consist of two forensic doctors and about 15 gendarmes from the National Gendarmerie's Criminal Research Institute (IRCGN). These experts are trained in crime scenes and victim identification. In particular, they have publicly recognised skills in ballistics, explosives, DNA sampling and processing as well as fingerprints. The team’s responsibility will be able to identify corpses and forensic investigation through rapid and projectable genetic analysis equipment.

The IRGCN is an internationally recognised institution which carries out forensic activities both within France and abroad. They use 130 testing methods which are accredited according to ISO 17025 standards. Their activities consist of support and assist field units in serious criminal cases, disasters or complex investigations which implies assistance with technical and scientific sampling operations or victim identification. The general profile of some of the IRGCN’s activities can be accessed on the website of the French Ministry of Justice.

Therefore, Mikhail Mizintsev’s attempt to cast doubt on the activity of the aforementioned group of forensic experts and blame them for hiding crimes is nothing more but Russia trying to conceal possible war crimes committed against civilians in the Kyiv region by the Russian military. Furthermore, the claim that crimes were committed by the Ukrainian side was already rejected by the international community. Independent investigative teams, journalists, international organisations and leaders of the big powers agree that the atrocities committed in the Kyiv region, in particular in Bucha, were done by Russia and they equal “war crimes” based on visual evidence and witness testimonies. See FactCheck’s article for more details.