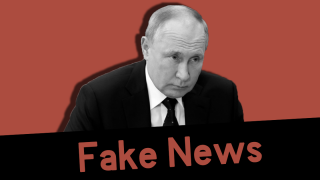 Disinformation: Russia does not wage war in Ukraine but conducts a special military operation

The Russian President, other government figures and the pro-Kremlin media refer to Russia’s invasion of Ukraine as an “operation,” a “military operation” or a “special operation.” For instance, Russia’s Federal Service for the Supervision of Communications, Information Technology and Mass Media (Roskomnadzor) prohibits the name of the ongoing military activities as an “invasion,” an “attack” or a “war” (using these terms would result in banning the respective website. In addition, dissemination of “fake news” about the Russian Armed Forces can lead to 15 years in prison). Media and schools in Russia have been instructed that whilst speaking about military measures taken against Ukraine they must use the terms “special operation” or “special military operation” instead of the word “war.”

In reality, Russia has launched an unprovoked and an unjustified full-scale war against Ukraine. After Russia invaded Ukraine, Moscow used its veto power on 25 February 2022 to block a United Nations Security Council (UNSC) resolution sponsored by the USA and Albania condemning Russia’s aggression in Ukraine and demanding that Moscow immediately cease its offensive and withdraw troops, thereby curtailing UNSC ability to act. As a result, the UNSC referred the crisis to the General Assembly for the first time in the last 40 years. In addition, the UN General Assembly session over the Ukraine crisis was only the 11th emergency session of the UN General Assembly that has been called since 1950. At this emergency session, the UN General Assembly adopted a resolution entitled Aggression against Ukraine which was drafted by the EU in cooperation with Ukraine and nations across every region of the world. The UN General Assembly voted overwhelmingly in favour of the resolution as 141 countries voted for and only five (Belarus, North Korea, Eritrea, the Russian Federation and Syria) against with 35 abstentions.

The resolution condemns Russia’s aggression against Ukraine in the strongest form. It denounces one country’s decision to use force against another and declares that Russia’s military offensive is against the UN charter. It also calls for the Russian Federation to immediately cease the use of force against Ukraine and withdraw all of its military forces completely and unconditionally, etc. The resolution mentions a “special military operation” only once and in quotation marks. In particular, the resolution condemns the announcement of the “special military operation” in Ukraine by the Russian Federation on 24 February 2022. Therefore, it is only used in the text to describe the statement of the Russian side and it does not support the idea behind its meaning because it is given in quotation marks.

Most of the world governments also say that Russia’s invasion of Ukraine is a war. For instance:

• UK Prime Minister Boris Johnson has used the word “war” multiple times whilst speaking on Russia’s invasion of Ukraine at the House of Commons. Furthermore, he often calls the ongoing war as “Putin’s war.” On top of the Prime Minister’s statements, the UK government’s website says: “The Foreign Secretary announces 65 new Russian sanctions to cut off vital industries fuelling Putin’s war machine.” In addition, a press release on the UK government’s website informing about sanctioned individuals and organisations says that Russia’s Channel One has described the Ukrainian war as a “special military operation.”

• US President Joe Biden said in his statement about Russia’s invasion of Ukraine that Russia and Putin chose an “unjustified” war “without a cause.” President Biden also tweeted that this war has already been a strategic failure for Russia.

• The German Chancellor also says that Russia’s aggression against Ukraine is a war. Furthermore, in one of his interviews, Mr Scholz stated that “this is a crime” and “Putin’s war.”

• French President Emanuel Macron stated that the war was launched by Putin.

• The EU also concludes that Russia’s actions are war. These are the phrases from the statement of the President of the Council of Europe: “war in Ukraine rages on...,” “The state-owned Russia Today and Sputnik, as well as their subsidiaries, will no longer be able to spread their lies to justify Putin's war and to sow division in our Union” and “In addition, we will sanction those Belarusians helping the Russian war effort.”

• Australia also says that Russia’s invasion of Ukraine is a war. The Australian Prime Minister, Scott Morrison, made the following statements: “"We stand with you, Mr President [Zelenskyy] and we do not stand with the war criminal of Moscow," “Vladimir Putin had overestimated the capacity of how he might be able to prosecute this illegal war" and “When you have one nation bullying another, a democratic nation whose territorial sovereignty has been violated and war crimes being committed in Ukraine by Russia, then this is something that Australians will never stand for.”

• The Japanese Prime Minister, Fumio Kishida, also used the term “war” whilst speaking about Russia’s invasion of Ukraine: “Japan, along with India, will keep trying to end the war and keep providing support to Ukraine and its neighbouring countries.”

In addition, the Head of Vatican State, Pope Francis, stated in his response to the Russian narrative: “In Ukraine, rivers of blood and tears are flowing. This is not just a military operation but a war which sows death, destruction and misery.”

Apart from the governments, many authoritative international NGOs, such as Human Rights Watch and Amnesty International together with influential media including BBC, Deutsche Welle, Reuters, France 24, AFP, the Associated Press and top think tanks, such as RAND, Brookings, CEPA, CEPS, CFR and others, also refer to Russia’s aggression against Ukraine as a war/invasion and a full-scale invasion.

The scale of fighting goes beyond a simple special operation level since Russia carried out a full-scale invasion of Ukraine with an invading force consisting of nearly 200,000 troops. Russia uses nearly all types of weaponry except for weapons of mass destruction (Russia has not yet used nuclear, chemical or biological weapons). This weaponry includes phosphorus bombs, “Kinzhal” type hypersonic missiles and “Iskander” type ballistic missiles, “Caliber” missiles, (launched from warships), the so-called “vacuum” bombs, cluster munitions (international treaties, of which Russia is not a part, ban using such munitions), military aviation (fighters, air support jets, attack helicopters), artillery (for instance, “GRAD,” “SMERCH” and “URAGAN” multiple rocket launching systems), tanks and armoured vehicles and S-400 air defence systems, etc. One month has passed since the outbreak of warfighting and Russia uses these weapons to shell and attack large Ukrainian cities (Institute for War materials provide detailed information about all ongoing military operations in Ukraine).

According to NATO’s information, up to 40,000 Russian troops have been killed, wounded, taken prisoner or are missing in Ukraine. Therefore, Russia’s military actions which followed its invasion of Ukraine go beyond the scale of a “special operation” and, in fact, is a full-scale war (Europe in 21st century has not seen a war of such scale).