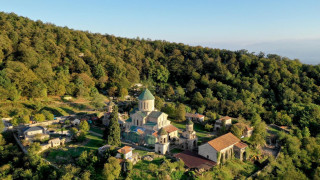 Why is Gelati Locked?

The Gelati central entrance is currently closed and locked. Simultaneously, conservation work is in progress inside the church, notwithstanding the conclusion that if the walls are wet the conservation results will be even more disastrous

FactCheck has already written about the massive rehabilitation programme for the Gelati Monastery complex (see the article).

In March 2020, the report of the National Agency for Cultural Heritage Preservation of Georgia revealed that the newly rehabilitated roof of Gelati’s Virgin Mary church was damaged because of frost. As a result, water started to infiltrate the western arm of the temple, damaging the wall paintings.

Although these shortcomings in the restoration work carried out at Gelati’s Virgin Mary church roofing was detected as early as in March 2020, the church was covered by tarpaulin tent which further exacerbated the already difficult conditions inside the church.

In June 2021, the Ministry of Culture of Georgia invited a team of UNESCO’s Italian experts. The team studied the state of Gelati’s wall paintings and rehabilitation work for the roofing.

The Ministry of Culture and Sport released the assessment of the Italian specialists in regard to the state of the wall paintings (Mario Pulieri, Vincenzo Centanni, wall painting conservation specialists): “Although installation of the temporary solid roofing over the main church in July 2020 stopped the water infiltration process, given the large volume of already infiltrated water at the time of the installation of solid roofing, the state of the wall paintings was critical.”

In regard to the second assessment which deals with roofing rehabilitation work (authored by the experts Hugo Tognetti and Sarah Stepanian), it reads: “As a result of the application of different approaches, techniques and materials, the picture is quite difficult. It seems like the workers were acting impromptu and in haste without any prior planning and had to improvise different decisions.”

On the basis of this assessment, experts of the Italian association Suardo produced a Gelati conservation plan. These recommendations, drafted by the Italians, describe the work which need to be done to save Gelati’s wall paintings.

Some Georgian specialists raised doubts early on vis-à-vis the recommendations suggested by the Italians. They sent the final conclusion to British experts at the Rickerby & Shekede company for their review. This group has carried out numerous projects across the world in the field of wall painting.

The review of the British experts offers a seven-point assessment of the work performed by the Italians. The oft-repeated word in the review is failure: 1. Failure to achieve a mission goal, 2) Failure to observe international conservation criteria, 3. Inadequate connection between the technology and wearing out phenomenon, 4) Weak studies and data interpretation, 5) Wrong emphasis in suggested measures, 6) Lack of clarity between immediate and interim measures and 7) Recommendation on inappropriate and potentially damaging actions.

According to the experts from the UK, the Italians carried out a superficial study, did not delve into painting technology and painting materials and decided that all of the wall paintings were done in a fresco technique which is not true.

The British experts also disagree with the Italians’ recommendation on conservation and the reinforcement and removal of salts since they believe that the work is untimely and risky given the humidity of the walls.

They also concluded that the Italians did not properly study moisture infiltration and spread areas. In order to identify humidity, the Italians used meters which are used for wooden materials and cannot provide comprehensive information in the case of stone. The Italians also used an empirical method to measure the moisture on the painting and determined the level of dampness by sticking salty papers on it. Therefore, their work cannot be considered as a humidity study.

The British experts also wrote that Suardo breached international conservation norms and recommended the use of such materials that would damage the paintings after years.

According to the final conclusion of the experts of the UK, if Gelati’s walls are still wet then any conservations of the wall paintings will put them into a worsened state.

The Ministry of Culture and Sport is also familiar with the assessments from the UK company. Nevertheless, on 1 November 2021, the National Agency for Cultural Heritage Preservation of Georgia announced five tenders in regard to the conservation of the Gelati Monastery and signed a contract with Merab Buchukuri and his team. The contract envisions wider studies for the state of the Gelati wall paintings and mosaics as well as the implementation of urgent conservation work.

As mentioned earlier, the Gelati central entrance is currently closed and locked. Simultaneously, conservation work is in progress inside the church, notwithstanding the conclusion that if the walls are wet the conservation results will be even more disastrous. The Ministry of Culture and Sport has not released an official statement in regard to the ongoing works at Gelati and despite multiple attempts from the specialists gives no commentary.

We are neither experts nor specialists in the field of wall paintings. We offer the assessment of the reality on the ground. There are two contradicting assessments in regard to conservation of the Gelati church’s wall paintings as well as there are accompanying legitimate questions. Georgian citizens, together with the specialists, are seeking answers to these questions and the Ministry of Culture and Sport in the capacity of a responsible institution has an obligation to answer them.

We remain hopeful that the conservation/restoration of Gelati wall paintings will be carried out in full observance of international standards as well as with the involvement of high-quality experts whose efforts will result in saving already very damaged wall paintings.