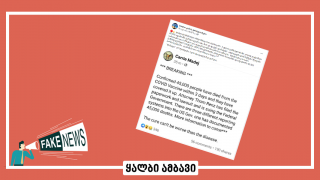 Disinformation: Forty-five thousand people died in the USA from vaccination within three days.

On 19 July 2021, the End Time Christians Facebook page posted a screenshot of a publication by anti-vaxxer doctor, Carrie Madej, with a Georgian translation. The publication says that the deaths of 45,000 people from the COVID vaccines within three days were covered up and attorney Tom Renz is suing the federal government for this fact. In reality, the information in the publication is untrue and is an item of fake news.

International fact-checking platforms, such as Politfact and Snopes, concluded that this particular news item was fake. First, the claim in the Facebook publication that 45,000 people died in the US from the COVID-19 vaccines within three days is part of a lawsuit prepared by Tom Renzi on behalf of America’s Frontline Doctors. Mr Renzi filed a lawsuit in an Alabama court against Xavier Becerra, Secretary of the US Department of Health and Human Services. Tom Renzi and the Alliance v Becerra claimed that the federal government did not have ground to roll out the COVID-19 vaccines. Thus far, the case is still pending before the Alabama court.

The alliance of America’s Frontline Doctors gained notoriety by promoting fake, conspiratorial and misleading information amid the pandemic. In 2020, the members of the Alliance talked about false methods of the coronavirus treatment, the bloating of the statistics of virus fatalities and claimed there was no need to introduce restrictions. Afterwards, they started to promote fake news vis-à-vis COVID-19 vaccines. Currently, the Alliance started to proceed forward with the aforementioned lawsuit which concerns the cover-up of the deaths of 45,000 people within three days in the US.

In fact, the lawsuit of America’s Frontline Doctors is based on a testimony of an anonymous source, Jane Doe. The testimony says that “Jane Dow” cannot reveal her real identity out of fears of personal safety and losing her job. The lawsuit also says that “Doe” compared VAERS figures to vaccine-related medical claims and patient deaths in medical centres. According to “Doe’s” estimates, the deaths occurring within three days of vaccination are five times higher than those reported in VAERS. Of note is that the lawsuit did not specify the parameters for which “Doe” established her figures and came to her conclusion.

According to the lawsuit, “Doe” takes the 9,048 deaths reported in VAERS by 9 July 2021 as the starting line of her calculations. However, these figures are not accurate since there were 6,207 reported deaths in the VAERS database among vaccinated individuals on 19 July 2021 according to the US Centre for Disease Control. Although there were over 6,000 deaths in VAERS, the CDC says that specialists of the CDC and the FDA (America’s Food and Drug Administration) need to review patient clinical information, death certificates, autopsy results and medical records in order to establish a direct link between deaths and the vaccines.

FactCheck would like to inform the readers that VAERS (Vaccine Adverse Event Reporting System) is something similar to an early warning system for vaccine-related side effects and is run by the US Centre for Disease Control (CDC) and the Food and Drug Administration (FDA). VAERS, as an early warning system, can indicate important data in the database, although these data require additional research and processing. According to health professionals, it is generally not possible to find out if a vaccine caused an adverse event through using VAERS data. Therefore, it is wrong to determine a cause-effect relationship between the cases of death and the vaccine based on VAERS data.

Therefore, the claim that 45,000 people died within three days after receiving COVID-19 vaccines is untrue and fake news. This information belongs to “Jane Doe,” an anonymous source and mentioned in a lawsuit of America’s Frontline Doctors which was prepared by the aforementioned attorney Tom Renzi, and is based on the testimony of the same “Jane Doe.”