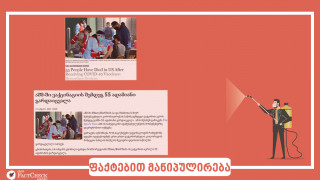 Disinformation: Fifty-five People Died in the USA from Vaccination

Disinformation: Fifty-five People Died in the USA from Vaccination

On 17 January 2021, Report.ge published an article under the following headline: “Fifty-five People Died in the USA from Vaccination.” The article is based on information of The Epoch Times, an American media outlet. According to the articles, people died in the USA after being administered with the Pfizer-BioNTech and Moderna coronavirus vaccines. Report.ge also mentioned the death of 23 people in Norway who had been vaccinated with the Pfizer-BioNTech vaccine.

Of note is that the information on death of 55 people in the USA from vaccination cannot be found on reliable news websites. All of the articles which have been produced on this topic are based on the article from The Epoch Times (see link 1, link 2, link 3, link 4 and link 5) which Report.ge indicates as a source. In addition, information about the death of a Colorado native, aged 66, also cannot be accessed.

The article from The Epoch Times, which reports the death of 55 people from Pfizer-BioNTech and Moderna vaccines, is based on a VAERS report. VAERS (Vaccine Adverse Event Reporting System) is something similar to an early warning system for vaccine-related side effects which is run by the US Centre for Disease Control (CDC) and the Food and Drug Administration (FDA). It is mentioned in the article that VAERS reports can be filed by anyone, including healthcare providers, patients or family members. Therefore, VAERS, as an early warning system can indicate important data in the database, although this data requires additional research and processing. According to health professionals, it is generally not possible to find out if a vaccine caused an adverse event through using VAERS data. Therefore, it is inappropriate to determine a cause-effect relationship between the cases of death and vaccine based on VAERS data. Of note is that The Epoch Times also speaks extensively on VAERS data being unreliable, based on interviews from US CDC and FDA representatives, among others: “It is important to note that it is generally not possible to find out from VAERS data if a vaccine caused an adverse event,” said Abigail Capobianco, press speaker of the FDA. However, Report.ge does not provide the following explanation in its own article.

Of additional interest is that the term ‘adverse event’ refers to any health problem which may be completely unrelated to vaccine. For instance, one of the VAERS lists includes death by road traffic accidents as an ‘adverse event.’ In fact, such facts have nothing in common with vaccines. There are such unrealistic reports filed on the VAERS database such as vaccination causing the transformation from one person into the Marvel comics hero, the Hulk.

According to Health Feedback, a member of the WHO’s Vaccine Safety Network Global Project, citing VAERS reports on vaccine harmfulness is one well-tested method. Health Feedback has also verified vaccine-related disinformation sparked by the VAERS database multiple times in the past.

In regard to the 23 reported deaths in Norway, there were no confirmed reports that death cases were indeed caused by the coronavirus vaccines on 16-17 January 2021 at the time of Report.ge’s article. It was reported that 30 elderly people died in Norway’s nursing homes shortly after being administered their first dose of the Pfizer-BioNTech coronavirus vaccine and each of them were over the age of 80 years. More precisely, there were 23 officially reported post-vaccine deaths in Norway as of 14 January 2021. As of 18 January 2021, the Norway Institute of Public Health had already studied and made public the autopsy results of 13 deaths out of the total of 23. According to these results, no links were identified between the vaccine and the deaths. As stated by the Norwegian Medicines Agency officials, there is no evidence of a direct association between the latest deaths among the elderly people and the COVID-19 vaccines.

Therefore, Report.ge’s information on the death of 55 people in the USA from the vaccine lacks context. Report.ge uses The Epoch Times as a source, although it reports information in such a manner that the idea of the original content is lost and the reader is misled. The Epoch Times is an international media outlet which is published in 21 languages. According to Media Bias/Fact Check which aims to inform the public on media bias and false/fake news, The Epoch Times is a questionable source which promotes imprecise and false information.