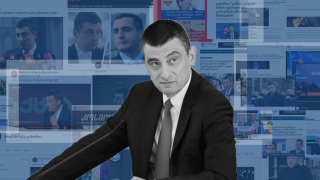 Political figures, political commentators and news agencies as well as fake or real Facebook accounts are among the purveyors.

On 18 February 2021, the Prime Minister of Georgia, Giorgi Gakharia, resigned from his position. Mr Gakharia said the reason for his resignation was a dispute with his party allies over Nika Melia’s arrest. Afterwards, he announced his return to politics and held a founding convention and a presentation for his new For Georgia political party on 29 May 2021.

Before and after unveiling his party, there were different types of reactions on Facebook in regard to Giorgi Gakharia. Among the purveyors of these reactions, there are political figures, political commentators and news agencies as well as fake or real Facebook accounts. In this article, FactCheck offers an overview of messages about Giorgi Gakharia and their sources. 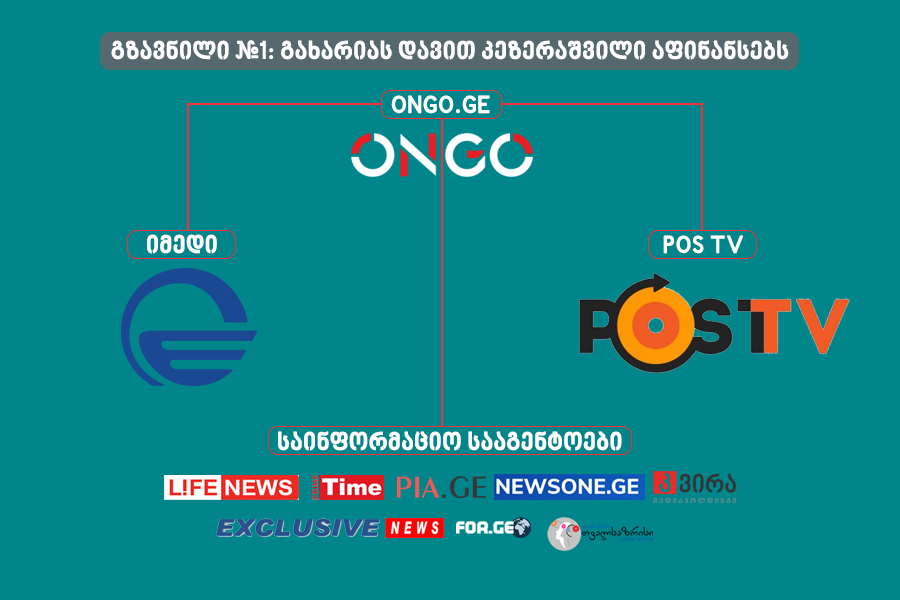 The first message in regard to Giorgi Gakharia was about linking his party with the former Minister of Defence of Georgia, Davit Kezerashvili. On 27 May 2021 two days before Gakharia’s unveiling his new political party, the news agency Ongo.ge published an article entitled “Giorgi Gakharia Found his Sponsor.” The article reads that Davit Kezerashvili has become Gakharia’s financial partner. Based on its anonymous sources, Ongo.ge stated that the two former ministers communicate with each other through the former Deputy Head of the State Security Service, Aleko Khojevanishvili.

The website of the Ongo.ge news agency shows no information about the owner or the team. In addition, the description of the nature of their work and other important information, which would make the agency more transparent, is also unavailable. The earliest news that can be accessed on the website is dated September 2019. According to the agency’s Facebook page, it was founded in September 2019. However, the news agency rose to prominence only after it had started to publish information about Giorgi Gakharia provided by its reliable source.

Of note is that both TV Imedi and PosTV delivered the story of Kezerashvili’s alleged funding of Giorgi Gakharia as major news information. Their only source was Ongo.ge’s article.

After Giorgi Gakharia unveiled his new political party, For Georgia, on 3 June 2021, Ongo.ge published a new article entitled “Kezerashvili has Already Spent Over a Million for Gakharia’s Party.” The article reads that Mr Gakharia’s party expenses went beyond one million and “according to Ongo.ge’s sources, the party convention alone cost Davit Kezerashvili nearly GEL 150,000.” 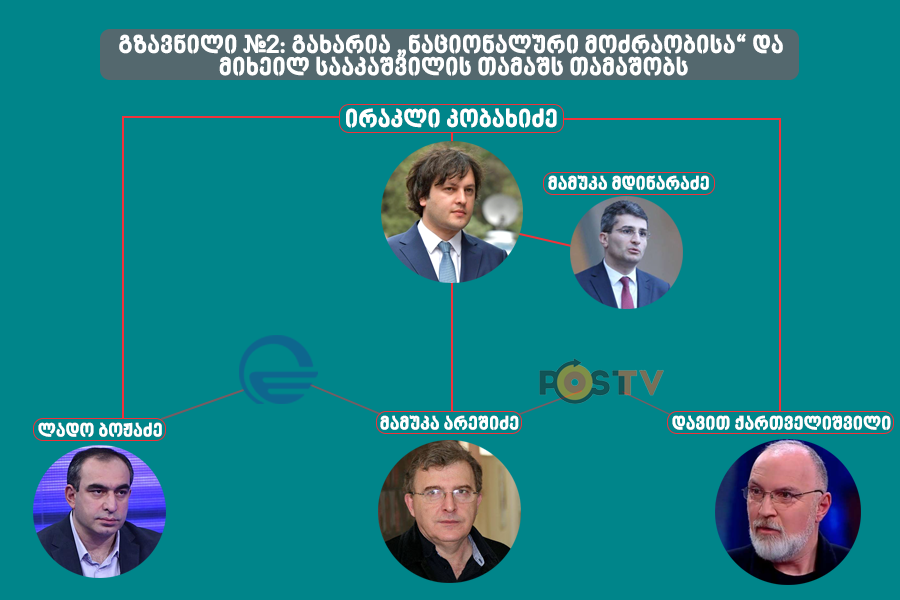 Apart from Giorgi Gakharia’s alleged ties with Davit Kezerashvili, government officials, some political commentators and news agencies also speak about Mr Gakharia’s links with the United National Movement and Mikheil Saakashvili. This message first started to be promoted directly by the high-ranking Georgian Dream officials. However, later, the messages were boosted by the community of political commentators tied with the Georgian Dream.

The Chair of the Georgian Dream, Irakli Kobakhidze, on air on Rustavi 2 talked about Giorgi Gakharia’s and Saakashvili’s presumable joint plan. As stated by Mr Kobakhidze, he had information from Kyiv about fulfilling the United National Movement’s plan which envisioned “overthrowing” the government and Mikheil Saakashvili’s entrance into Georgia through Sarpi. It would take two days to accomplish this plan. At the same time, Mr Kobakhidze stated that Giorgi Gakharia, for completely unclear motives, was asking to postpone Nika Melia’s arrest exactly for two to three days.

Mamuka Mdinaradze also made a similar statement on the ties between Mikheil Saakashvili and Giorgi Gakharia. According to his statement, Mr Gakharia fights to play the United National Movement’s game. Mamuka Areshidze, a political commentator, also expressed an identical position. In his interview with Kvira, Mr Areshidze stated that Giorgi Gakharia’s resignation may be linked with Mikheil Saakashvili, the United National Movement and a revolution in the country. Yet another analyst and the Director of the Civil Society and Democracy Development Centre, Vladimir Bozhadze, agreed with Mamuka Areshidze and explained that Mr Areshidze’s interview where he speaks about the United National Movement’s revolutionary scenario and Giorgi Gakharia’s links with that scenario is absolutely logical. Another political commentator, Davit Kartvelishvili, stated that Giorgi Gakharia’s party’s “left” and “right” limbs are high-ranking officials from previous times having ties with Mikheil Saakashvili and Davit Kezerashvili.

Imedi TV and PosTV also broadcasted the aforementioned messages from the politicians and the political commentators. The Marshalpress news agency also published an article entitled “Saakashvili-Gakharia’s Plot – How Giorgi Gakharia Prepared the Plan for Misha’s Entrance into Georgia – Misha Ended Up Dug in and Disappointed in Sarpi.” 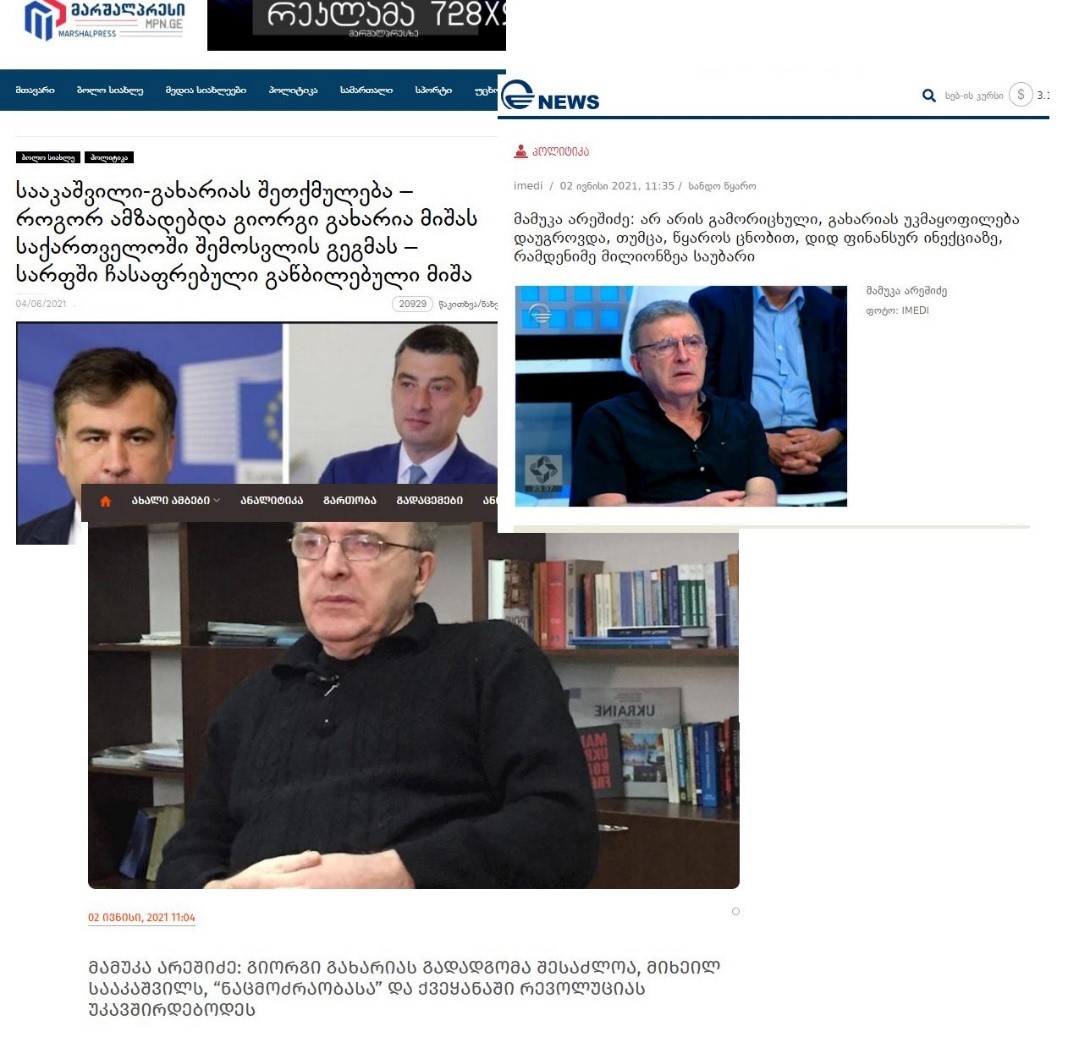 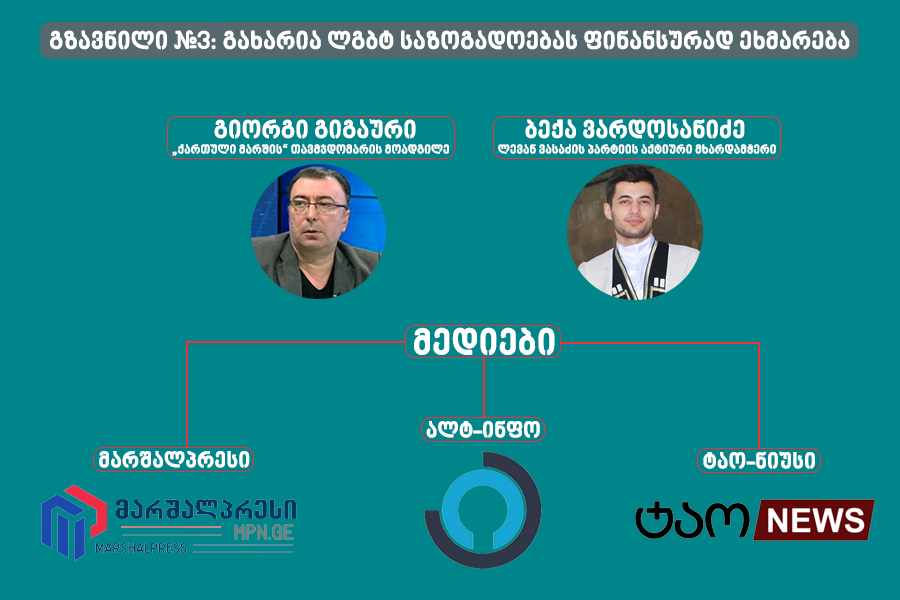 On 31 May 2021, the deputy leader of the far-right Georgian March and a journalist of the Asaval-Dasavali newspaper, Giorgi Gigauri, made a publication where he says that Giorgi Gakharia is an “LGBT lobbyist who sold the Rioni valley.” According to Mr Gigauri, Lela Akiashvili, Giorgi Gakharia’s advisor on human rights and gender equality, took part in an LGBT solidarity video conference on 12 May 2020 under his direct instruction. Giorgi Gigauri claims that it was the first time in history when the Government of Georgia officially took part in an LGBT event. This statement aims to discredit Giorgi Gakharia’s team for its support for the LGBT community which in turn will translate into negative approval numbers for him among the voters of illiberal attitudes.

The far-right and advocate of pro-Russian ideology TV Alt-Info and one of the most active supporters of Levan Vasadze’s party, Beka Vardosanidze, also used the issue of support for the LGBT community to smear Giorgi Gakharia’s team. According to their statement, Natia Mezvrishvili, a member of Mr Gakharia’s team, is an LGBT activist who signed the Istanbul Convention which makes the values of Mr Gakharia’s political party clear.

An article, entitled “Under Gakharia’s Premiership the Government Provided Material Assistance to LGBT People in 2020” and published by TaoNews news agency, also aimed to discredit Mr Gakharia on the same ground. The General Director of TaoNews is Nikoloz Mzhavanadze, the former anchor of the pro-Russian Obiektivi TV. 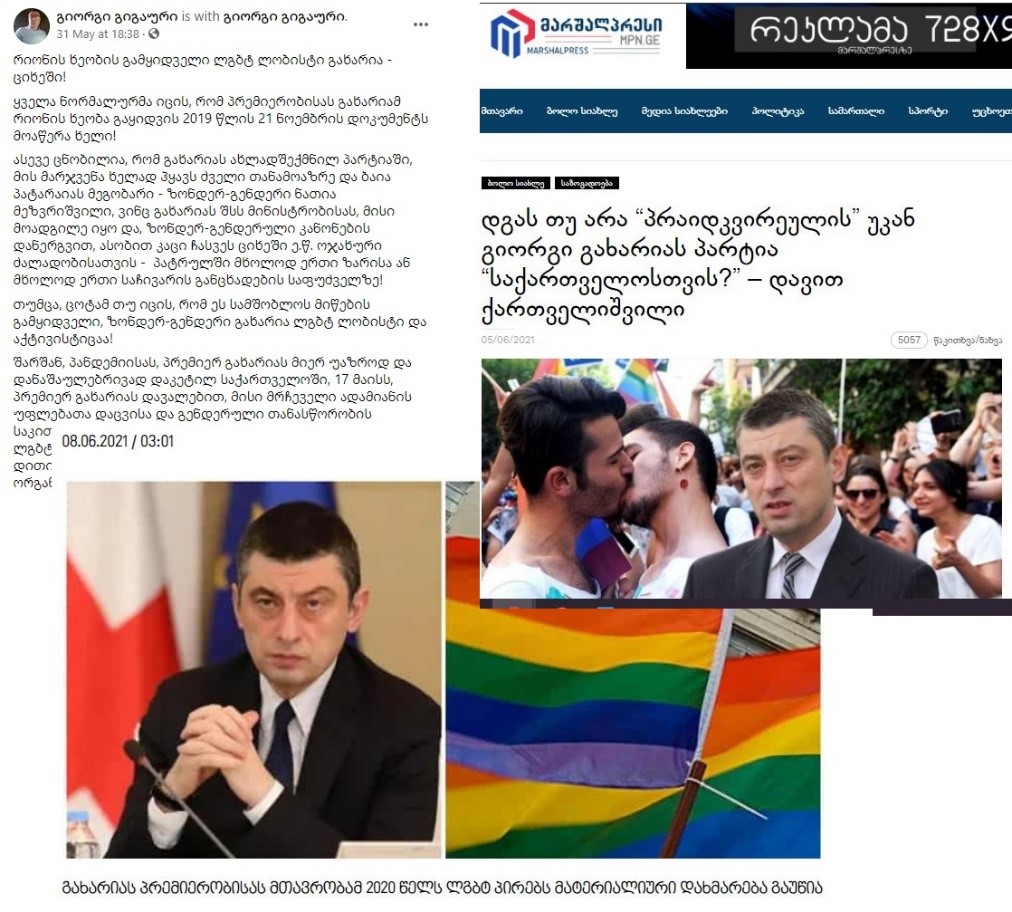 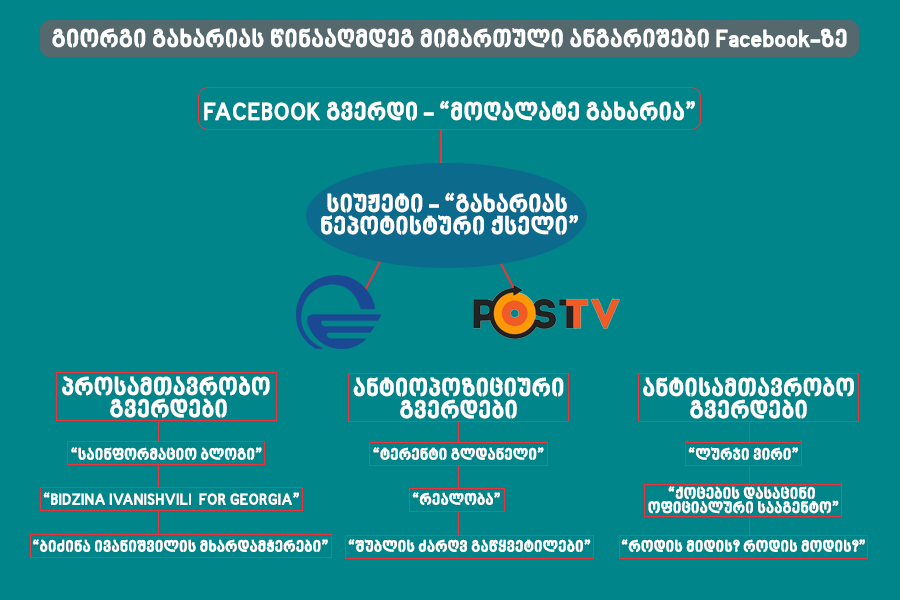 There are multiple Facebook accounts deliberately acting against Giorgi Gakharia. The Gakharia the Traitor Facebook page was quite active during the article writing process although it is inaccessible now. This Facebook page was created on 26 May 2021, three days before the presentation of the For Georgia party. See relevant screenshots below: 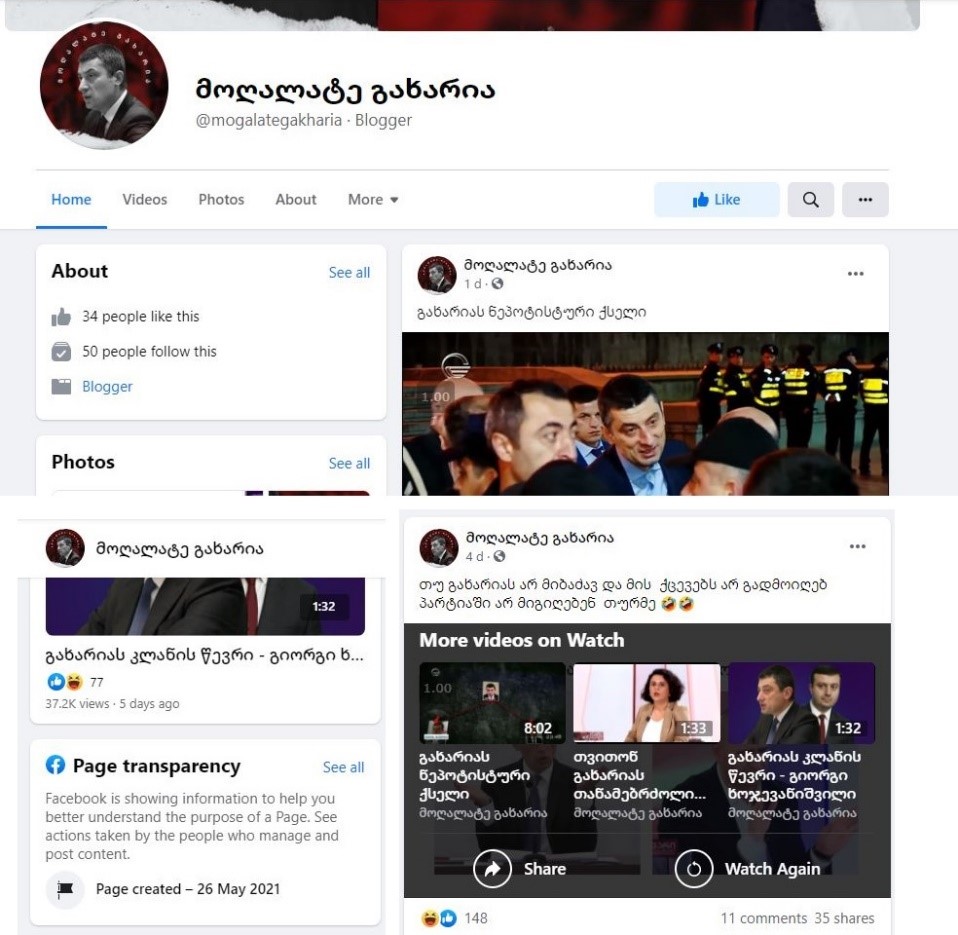 This Facebook page together with posting humorous publications about Giorgi Gakharia spent a great deal of time on his ties with his nepotistic network which lately has become one of the trending topics for TV Imedi’s and PosTV’s broadcasts. 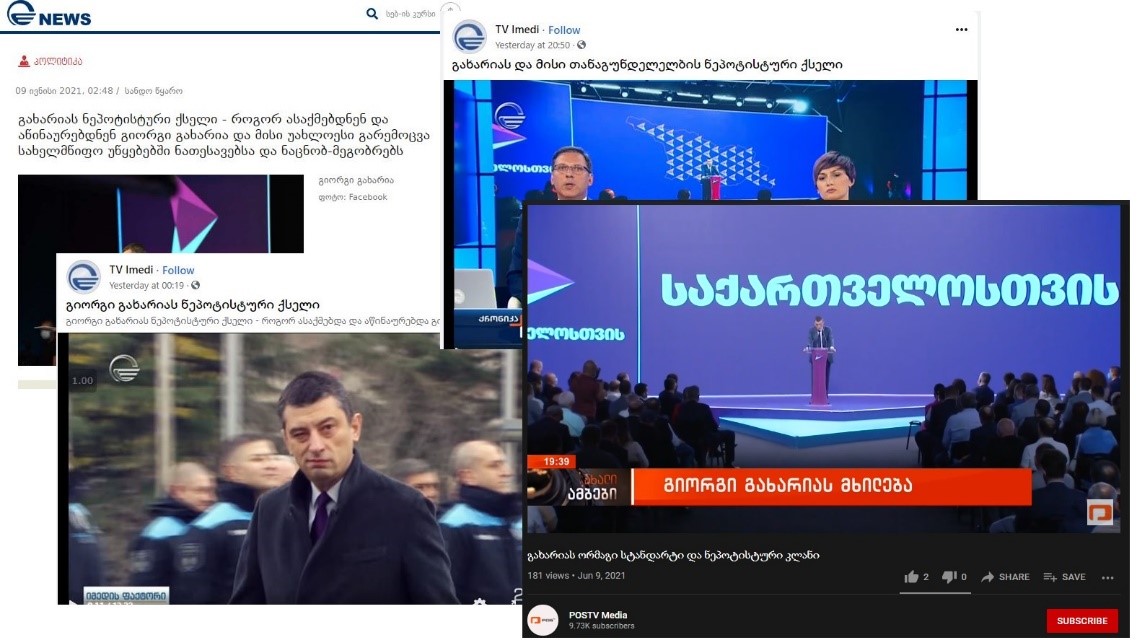 The pro-government Realoba/Reality Facebook page also disseminates similar information. In contrast to the previous years when it expressed support for Mr Gakharia, it is currently involved in a smear campaign through different forms: 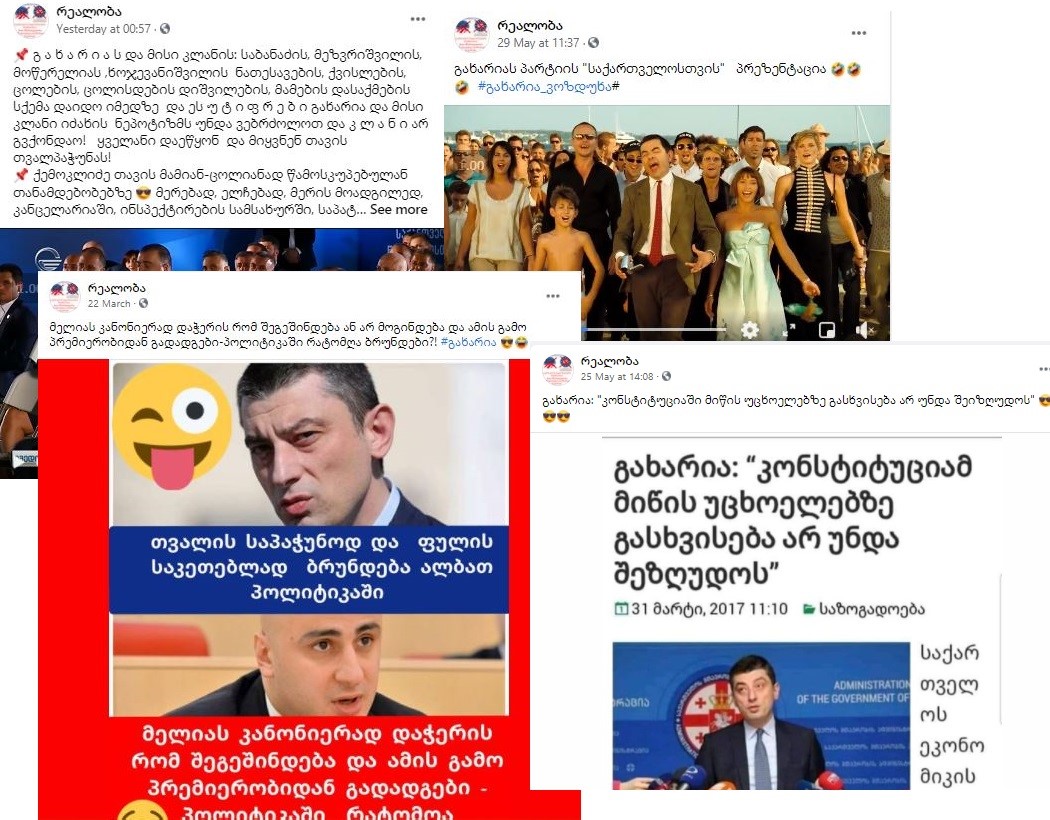 Another page, Terenti Gldaneli, which usually promotes opposition-smearing disinformation, also commented on Giorgi Gakharia’s return to politics with publications of a humorous content (link 1, link 2, link 3 and link 4). On 6 June 2021, the Terenti Gldaneli and the Gakharia the Traitor Facebook pages published an identical video on the visible similarities of the gestures between Mr Gakharia and his party ally, Kakha Kemoklidze. 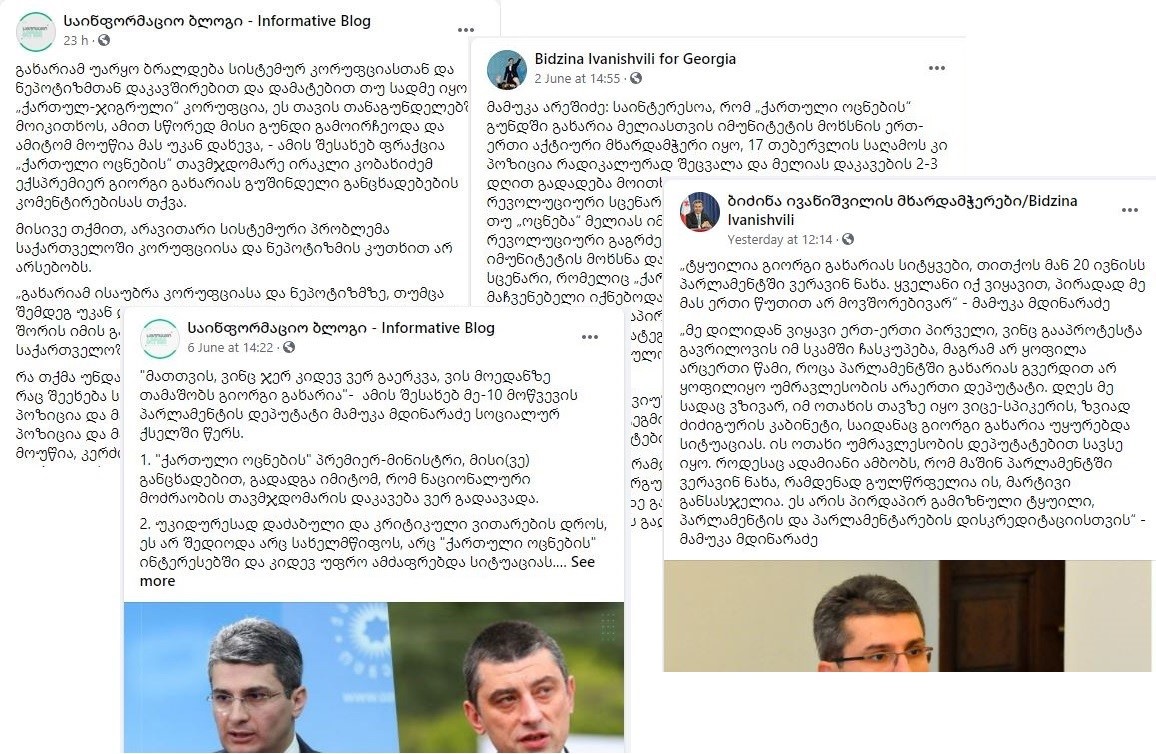 Opposition Facebook pages which often share identical content also promoted sarcastic and humorous publications about Giorgi Gakharia and his team. These pages are as follows: Blue Donkey, Official Agency to Ridicule Kotsies, Annual Events, When does he go? When does he come back? 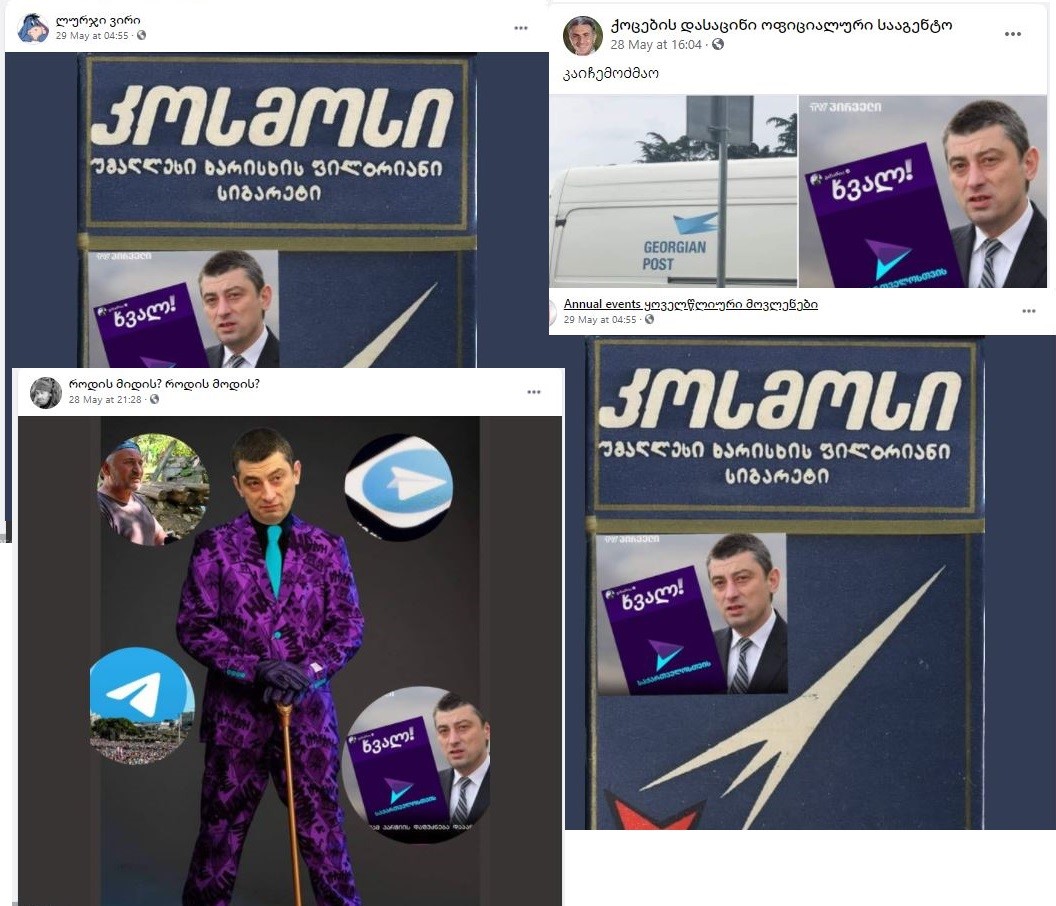 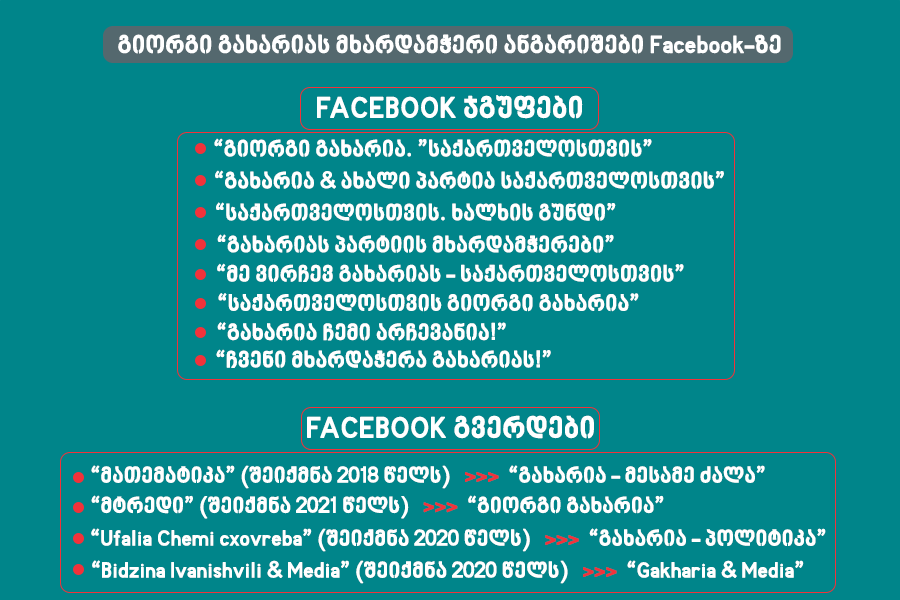 Giorgi Gakharia. The page was created in January 2020 under the name of Pigeon (Mtredi). In February, it changed its name and became Shvidi • Seven. On 22 February 2021, it was renamed as Giorgi Gakharia.

Gakharia & Media. The page was created in October 2011 under the name Bidzina Ivanishvili & Media. For ten years, the page continued to operate under this very name. On 23 March 2021, it was renamed as Gakharia & Media. 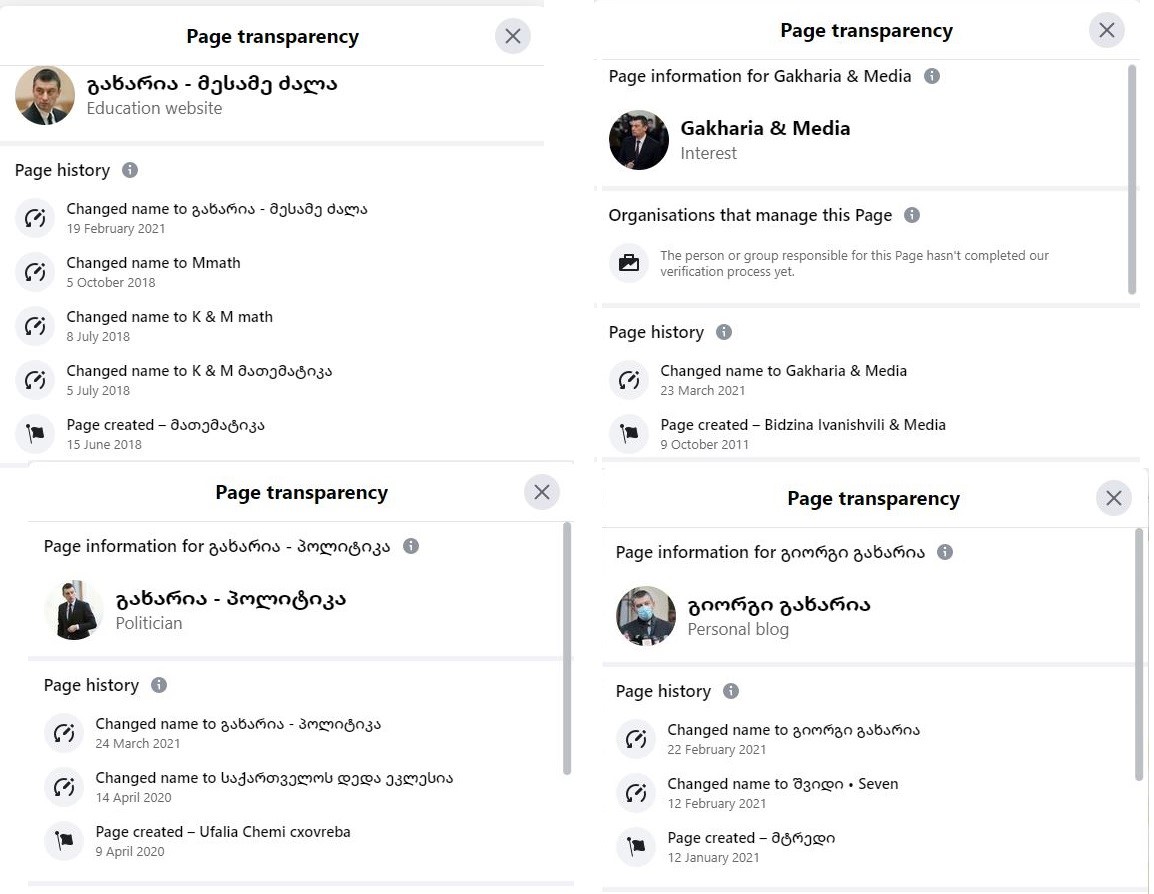