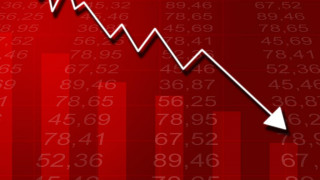 In accordance with the National Statistics Office of Georgia, foreign direct investments to Georgia in 2020 were USD 619.9 million which is the lowest figure since 2005.

In accordance with the National Statistics Office of Georgia, foreign direct investments to Georgia in 2020 were USD 619.9 million which is the lowest figure since 2005.

The issue of foreign direct investments (FDI) has always been a matter of serious discussion for Georgia. For developing and transitional economies like Georgia, which need resources and the experience of investors to gain ground on the international market and develop and expand their economies, FDI bears critical importance. FDI facilitates not only the inflow of foreign capital per se but helps deepening humanitarian ties, technological sophistication and gaining experience which is vital for a country’s development. Foreign direct investment implies a resident of one country owning a share in a foreign-based enterprise and carrying out different types of economic operations related to that enterprise. An investor is considered to be a direct one if he has at least a 10% ownership stake in a foreign-based enterprise’s shares or the equivalent of such participation.

In accordance with the National Statistics Office of Georgia, foreign direct investments to Georgia in 2020 were USD 619.9 million which constitutes a 53% drop as compared to 2019 and is the lowest figure in absolute numbers since 2005. At the same time, the figures for 2018-2019 were also substantially lower as compared to the previous periods. There amount of FDI in the fourth quarter of 2020 was negative, meaning that investment outflows exceeded investment inflows. It is the first time since 1995 (based on existing statistics) that FDI numbers went negative in Georgia. Only one sector of the economy, the financial sector, accounted for 65% of the total FDI in 2020. Investments in the fields of energy, hotels and restaurants as well as process industries have sharply contracted whilst investments rose in the financial sector and the mining, real estate and construction fields.

To be fair, it should be emphasised that the pandemic spelled catastrophe for investments not only in Georgia but across the globe. According to the UN’s projections, FDI in the world dropped by nearly 42% and the outlook remains negative. However, as mentioned earlier, the investment dynamic in Georgia was also already problematic in the pre-pandemic period. 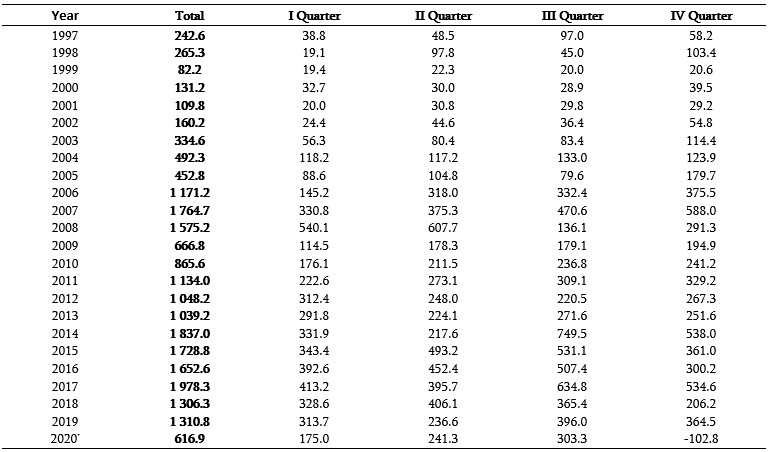 Foreign direct investments are comprised of three major components, including an investor’s equity capital, reinvestments and debt obligations. In the course of 2020, equity capital flows dried up almost entirely which was mostly related to the pandemic-induced crisis. In the same period, reinvestment largely accounted for the existing volume of investments; that is, USD 619.9 million. The reinvestment figure was also higher in 2019 and constituted 50% of the total investments. The large share of reinvestment in the FDI structure indicates lower figures of new investment inflows which is a negative occurrence for a country like Georgia. The FDI to the GDP ratio in Georgia was 7.5% in 2019 and 3.9% in 2020.

A number of details have to be highlighted whilst analysing foreign direct investments. In 2013-2020, the average FDI volume was USD 1.5 billion which is not a really large figure, macro-economically speaking. Therefore, the investment conjecture and statistics are linked with a technical aspect, on the one hand, whilst a single large investment flow or outflow may significantly affect the FDI figure, on the other hand. Naturally, the National Statistics Office of Georgia is unable to present perfectly detailed statistics since that would constitute an infringement of commercial secrets. However, the National Statistics Office of Georgia did name technical reasons behind the diminishing FDI in a number of cases. For instance, the completion of the final section of the British Petroleum (BP) pipeline and the transfer of Geocell to Silknet’s ownership as a result of which Geocell was no longer owned by a foreign investor were given among the reasons. Another example is TBC Bank’s decision to acquire control stock from Société Général – a French financial conglomerate in 2016.

The authorities have often referred to these circumstances when speaking about the aforementioned issues. However, their providing only “technical” aspects (paying debts, completion of BP pipeline project, etc.) may be speculative. Usually, attention was not paid to such details when FDI was on the rise in the past years. Of importance is that some of the investments were outflowing and leaving the country in the past (debts were paid and companies were sold), although these outflows were offset by other inflows which could not have been done in previous years. Therefore, the pointing out of technical reasons does not absolve the authorities of their responsibility.

It should also be highlighted that in the past years, FDI was coming from off-shore zones such as Panama, the Marshal Islands, etc. From these countries alone, USD 111 million was invested in 2019, accounting for 9% of the total FDI in Georgia. These countries also benefit from a preferential taxation system. Generally, it is a common practice in the world when business representatives carry out their work through off-shore registered entities which brings a number of benefits to them such as tax evasion, reduced transparency (information on off-shore based companies is not included in the public register), etc. It is assumed that Georgian nationals are behind the investment flows from off-shore locations to Georgia; that is, technically they are categorised as foreign investment which naturally is far from truth. In the Panama case alone, USD 209 million was the outflow from Georgia in 2020 which greatly affected the FDI figure.

Similar to the previous years, the National Statistics Office of Georgia said that the sharp drop in FDI in 2020 was also because some enterprises were now owned by Georgian residents. Gogita Todradze, Head of the National Statistics Office of Georgia, stated that the transfer of hotels and restaurants as well as a construction company to the ownership of the Cartu Charity Foundation for free in the fourth quarter of 2020 was a reason behind such sharp contraction where the FDI volume reduced by USD 300 million.

Generally, the attraction of FDI is the Government of Georgia’s manifested priority which is reflected in numerous public statements and official documents. From time to time, the Product of Georgia LEPL publishes an investment strategy and the Investment Agency is also operating in the country. It is evident that the government should be doing its best to attract new investors and keep existing ones, although the FDI statistics in the past years is not reallot all stellar. Moreover, foreign remittances exceed the volume of FDI in 2013 and in the last three years, meaning that emigrants brought more money for the country as compared to foreign investors.

Georgia will feel the pandemic-related problems, such as debt, deficit and the negative consequences associated with the decreased foreign capital inflow the most sharply in the future. Therefore, in order to at least partly offset the foreign capital deficit, it is vitally important that the government’s efforts are aimed at attracting foreign direct investments, either by making substantial steps to deliver large projects (such as the Anaklia consortium whose facilitation is a constitutional duty of the Government of Georgia), engaging in proper communication with foreign investors, stabilising the domestic and foreign policy conjecture, reforming the judiciary, etc., which are necessary preconditions for providing a reliable investment climate for foreign investors.