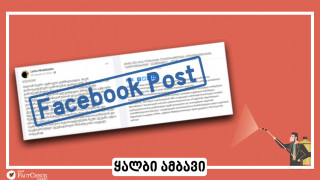 Since the very outbreak of the coronavirus pandemic, Georgia has once again been targeted by Russian disinformation. The Kremlin started to exploit the pandemic to reinvigorate its propaganda machine. The Lugar Centre, which identified the coronavirus since the outbreak of the disease in Georgia, has been one of the principal targets of conspiracy theories. Russian officials and government media promoted the disinformation that the coronavirus is a man-made virus created in the Lugar Laboratory. Georgian pro-Russian media also actively echoed the Russian propaganda messages. However, of interest is that the Russian disinformation and propaganda narratives are currently voiced by a Facebook user who has been deliberately and regularly spreading fake news and conspiracy theories about the coronavirus pandemic and vaccination.

According to a Facebook user, Lasha Modebadze, together with other 24 laboratories (scattered in developing countries), the Lugar Laboratory is an active originator of the pandemic. Mr Modebadze claims that biological weapons are being developed in the Lugar Laboratory and experiments are made on plants, animals and humans. He also says that both the former and incumbent government of Georgia turned Georgia into an experiment ground and the population into laboratory mice.

All these claims lead us to the Kremlin and Kremlin-affiliated sources. On 17 April 2020, Russian MFA spokesperson, Maria Zakharova, stated that Americans visited Georgia in April and suggested that the authorities expand clandestine research and activities in the Lugar Laboratory. According to Ms Zakharova, the USA creates such double-purpose laboratories in post-Soviet countries under the pretext of fighting terrorism: “It cannot be ruled out that the Americans use such reference laboratories in third countries to create and modify various dangerous pathogens, including for military purposes.” The leadership of the laboratory, together with the facility itself, have been targeted by the Russian disinformation.

On 26 May 2020, the Russian MFA released a statement questioning whether the Lugar Centre was in fact in line with the Convention on the Prohibition of the Development, Production and Stockpiling of Bacteriological (Biological) and Toxin Weapons. In May 2020, they also requested having access to all of the laboratory buildings and documentation (without the involvement of representatives of regional organisations).

The Pro-Kremlin media provided active coverage of the aforementioned disinformation and propaganda echoed by the Georgia-based pro-Russian media. They questioned the motives and the professionalism of the laboratory’s director. The pro-Russian online media outlet, News Front, published an article entitled “The Coronavirus Did Not Originate in China! Hello, Lugar Laboratory!” Their accusation is based on the version promoted by the Chinese. The spokesperson of the Chinese Ministry of Foreign Affairs, Lijian Zhao, stated on Twitter on 12 March 2020 that the coronavirus (CoVid-19) originated not in China’s Wuhan but in the USA and spread from there. In another article published in the same period, News Front sought to denigrate the importance of the Lugar Centre whilst, on the other hand, expressing suspicions in regard to its real functions.

The Pro-Russian Georgia and the World devoted an extensive article to the Lugar Laboratory, ostensibly trying to provide a neutral assessment of its work. Nevertheless, the spirit of the article was that the Lugar Centre was an opaque facility whose construction and functioning were associated with numerous secrets. In another article, Georgia and the World argued that secret tests were taking place at the Lugar Laboratory which were so dangerous that the Americans refrained from conducting them on US soil and used Georgia to this end. Sputnik Ossetia also devoted a large article to the Lugar Laboratory, speaking of the obscure nature of the laboratory’s work and the possible breach of international standards. This narrative was in line with the positions of the Russian authorities, especially with the statement of the Russian MFA Press Speaker, Maria Zakharova, made a month earlier.

Georgian authorities responded to the allegations on developing biological weapons and originating the coronavirus in the Lugar Laboratory. The Ministry of Foreign Affairs of Georgia released a statement saying that the Russian Federation has deliberately intensified its hybrid warfare tools against Georgia and with fabricated propaganda myths it constantly attacks one of the laboratories of Georgia’s National Centre for Disease Control and Public Health – the Richard Lugar Centre which plays a crucial role in the fight against spread of the coronavirus in Georgia. The Georgian MFA also stated that allegations that the Georgian Government has artificially spread the Coronavirus in the occupied Tskhinvali region and collected biological samples from the residents of the region were absurd and ridiculous.

Of note is that the Georgian State Security Service the names attacks against the Lugar Laboratory as classic examples of disinformation in its annual report.

In fact, the laboratory’s scope includes epidemiological and laboratory supervision over infectious and non-infectious diseases as well as the timely detection and research on diseases, epidemiologic outbreaks and other public health hazards. The coronavirus pandemic further highlighted the importance of the Lugar Laboratory. It is thanks to this laboratory that Georgia is able to detect the disease in a timely manner. Amiran Gamkrelidze, Director of the National Centre for Disease Control, even stated that without the Lugar Laboratory, they would have devised a new technique for disease technology and coronavirus testing which naturally would have increased the time for detection. He also said that the only country having questions about the laboratory is “our big neighbour country” which has political aims in this regard. Paata Imnadze, Head of the Lugar Laboratory and the Deputy Director of the National Centre for Disease Control, has stated multiple times that “Russia deliberately circulates disinformation” about the Lugar Laboratory.

The European External Action Services’ East STRATCOM Task Force also responded to the false allegations targeting the Lugar Centre and 24 other laboratories on spreading the coronavirus and stated that it was disinformation in regard to the “secret laboratory” which has proven to be a good vessel for distraction and disinformation.

Of note is that the Kremlin has also been actively using a propaganda machine against the Lugar Laboratory in the past years. In 2018, General Igor Kirilov, Commander of the Russian Armed Forces' Radiological, Chemical and Biological Defence Troops, said that the United States is using laboratories in Georgia to research ways to deliver and unleash biological weapon agents in breach of international accords. At a press conference, General Kirilov presented “leaked classified documents” from the Ministry of Health, Labour and Social Affairs of Georgia, claiming that “explorations of extremely poisonous and lethal chemical or biological agents are in progress in the public health research centre.” Facebook user Lasha Modebadze also talks about “leaked secret documents” whose source is the Kremlin-affiliated journalist, Dilyana Gaytandzhieva. Ms Gaytandzhieva herself is the author of numerous disinformation and conspiracy theories. She also penned an article to spread fake news about the Lugar Laboratory and tarnish the facility’s image. It is not incidental that General Kirilov’s statement a month ago was preceded by a disinformation statement about the Lugar Laboratory from Maria Zakharova, Russian MFA spokesperson. After the Defence and Foreign Affairs ministries, Putin himself declared at the event of Valdai Club that “these studies are related to the latest achievements in the field of genetics and that drugs are being developed that can influence people, depending on their belonging to one or another national group.”

The accusations were promptly responded to by Pentagon spokesman, Eric Pahon, and he named these attempts on the part of Russia as activities of its false information campaign against the West. Although the latest campaign about the Lugar laboratory came as another example of Russia’s malign behaviour, the Georgian government did little to take advantage of its adversary and expose the Kremlin’s propaganda machine on the international arena. The story about the Lugar laboratory also captured the attention of the BBC. The world known agency found that Russian media and officials presented false claims about a US-funded laboratory in Georgia.

Of mention is that on 1 September 2020, a cyber-attack from one foreign country was carried out against the computer network of the Ministry of IDPs from the Occupied Territories, Labour, Health and Social Affairs. The aim of the cyber-attack was to penetrate the Ministry’s central staff and structural units, including the databases of the Richard Lugar Public Health Centre. Some documents collected as a result of the cyber-attack were uploaded on foreign websites. Of note, however, is that forged materials were also uploaded together with authentic ones, aiming to sow confusion and promote disinformation around the Lugar Laboratory. Deputy Head of the National Centre for Disease Control and Public Health, Paata Imnadze, surmised that the attack was launched from the Russian Federation.

Lasha Modebadze is a Facebook profile who regularly promotes fake news and conspiracy theories on coronavirus-related topics both on a private Facebook account and in the “Coronamafia and Georgia as an Experimental Playground” disinformation group. He actively makes publications on PCR tests being harmful, the corona-scam, the new world order, vaccines and on similar topics. FactCheck has written multiple times about fake news promoted by Lasha Modebadze (see link 1, link 2 and link 3).