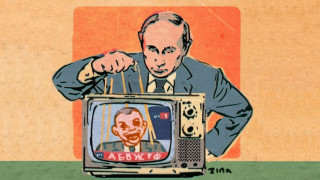 There is a whole array of tools of Russia’s malign behavior represented in Georgia, starting from cyber-plots to the whole army of disinformation agencies that are wrapped up in nationalist façade but ultimately are promoting Russian worldview and politic

Winter session is often characterized with the increased rate of flus. Georgia is not an exception to it. However, this year sessional flu got significantly severe, until today approximately 200 cases of so-called “swine flu” have been reported in Georgia, with 15 fatal results. Unfortunate situation was quickly manipulated by the well-known sources of anti-Western disinformation. Several news agencies as well as many proponents of radical ultra-nationalist groups, often identified with spreading fake stories, have tried to link the outbreak of sessional virus with the Lugar Laboratory in Georgia. After the rise in flu related death, former leader of “Georgian march”, Lado Sadghobelashvili called on suspending the laboratory unless its work becomes transparent and open for the public. Online news agency news.net.ge published an article where the fact that swine flu is being searched at the Lugar Laboratory is linked to a conspiracy as if the laboratory’s research activity should to be blamed for spreading the H1N1 virus in the country.

Manipulations about Lugar laboratory are not new and the myths about the laboratory have been floating not only domestically, but recently also by the Russian high officials. The topic is discussed to ad nauseam by different channels of anti-Western propaganda, ultimately aimed to make the public believe in the false story by continuously repeating the disinformation. Since its establishment, Russian propaganda in Georgia has been systematically producing disinformation about the center, saying that scientists there conduct life-threatening experiments on humans or that the center is producing artificial viruses to eliminate and infect people both in Georgia and Russia, going as far as blaming the center for spreading H1N1, mosquitoes infected by Zika virus, setting Asian bugs on Abkhazia and the southern part of Russia. In one of the disinformation campaigns the so called “Secretary of the Security Council” of Abkhazia, Mukhamed Kilba blamed the laboratory for producing biological weapons close to Abkhazia’s border. He also assumed that mass poisonings of children in Tkvarcheli in 2013, as well as swine flu cases of which have been detected there, were related to the activities of that laboratory.

Though the center has been a frequent subject of disinformation attacks, last year the Kremlin propaganda did not cover itself behind the so called media agencies neither in Russia nor in Georgia, but rather took its long pursued clendestine narrative on a state level campaign, aired by Defense and Foreign Affairs ministries. On 4 October, 2018 Gen. Igor Kirillov, the commander of the Russian Armed Forces' Radiological, Chemical and Biological Defense Troops, said that the United States is using laboratories in Georgia to research ways to deliver and unleash biological weapons agents in breach of international accords. At the press conference, Gen. Kirillov disclosed “secret documents leaked” from the Ministry of Labor, Health and Social Affairs of Georgia that he used as a reference for his claims that “the Lugar Center for Public Health and Research in Georgia is researching a highly toxic and highly lethal chemical or biological agent”. Not incidentally, month prior to Kirillov’s announcement, during one of her press briefings, Maria Zacharova, spokesperson of Foreign Affairs Ministry of Russia, stated that bio-laboratory in Georgia represented one of many examples of US established army medical institutions in Russia’s neighboring countries, where the military personnel is carrying out experiments on Georgian citizens and breaching medical ethics as well as norms of international law. After Defense and Foreign Affairs ministries, Putin himself declared at the event of Valdai Club that “these studies are related to the latest achievements in the field of genetics and that drugs are being developed that can influence people, depending on their belonging to one or another national group.”

The accusations were promptly responded by Pentagon spokesman Eric Pahon and named Russia’s attempts as part of its false disinformation campaign against the West. Though the latest campaign about Lugar laboratory came as yet another example of Russia’s malign behavior, the Georgian government did little to take advantage of its adversary and expose the Kremlin’s propaganda machine on the international arena. The story about Lugar laboratory also got in the focus of BBC. The world known agency found that Russian media and officials presented false claims about a US-funded laboratory in Georgia.

In reality, the laboratory’s scope of work includes conducting epidemiological and laboratory supervision of infectious and non-infectious diseases as well as timely detection and research of disease cases, epidemiological outbreaks and other threats to public health situations. The Center for Public Health and Research was established in 2013 and is now operated by the Georgian National Center for Disease Control and Public Health (NCDC). Due to false accusations, Georgian media agencies, politicians, experts and the laboratory employees have debunked fake stories and conspiracy theories through media reports, visits to the laboratory. Nevertheless, anti-Western channels are continuing to discredit the center and to portray it as the US weapon against Georgia, thus fueling skepticism about Georgia’s strategic partner – the USA.

Since 2016 news headlines have been dominated by stories that expose Russia’s malign influence extended from Washington to European capitals. But one rarely finds information on how the Kremlin instrumentilizes non-conventional weapons in Georgia, when in reality recent fake accusation about the Lugar center are only part of the large story. Georgia has been a subject of Russia’s information war for decades, it was one of the first victims of Kremlin’s cyber-attack in 2008 during August War and is a subject of continues disinformation attacks, aiming to cease Georgia’s western integrations and its democratic development.

There is a whole array of tools of Russia’s malign behavior represented in Georgia, starting from cyber-plots to the whole army of disinformation agencies that are wrapped up in nationalist façade but ultimately are promoting Russian worldview and political parties or so called NGOs openly embracing the Kremlin’s narratives, etc. The anatomy of Russia’s malign influence is large and its leverage on Georgia is also much worrisome. Against the background, the only ready-made recipe for the public is to fact-check false stories and not to fell the victim of disinformation. In the global information age, conventional weapons are not only influence measures. Power is no longer limited to whose army wins but rather it’s about whose story wins. Therefore, Georgian Government needs to take the threat seriously and respond to increasing disinformation campaign with effective strategic communication in order to domestically make its public immune and resilient to false stories and internationally, to expose Russia’s malign influences.