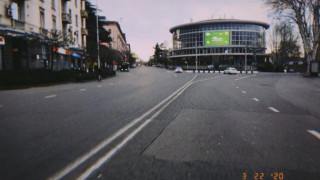 The first coronavirus death in Georgia was confirmed in the morning of 4 April. The victim was a 79-year-old woman who was admitted to the First University Clinic with a COVID-19 diagnosis. The patient had severe underlying health conditions (including severe cardiovascular diseases). The woman belonged to the village of Kapanakhchi cluster of lower Bolnisi where five people tested positive for the coronavirus.

In accordance with the decree of the Minister of Health of Georgia issued on 25 March, the corpse of an individual who succumbed to the coronavirus should be placed in a special body bag and both the corpse and the body bag’s cover should be disinfected. The body bag with the corpse should be placed inside a coffin and should not be opened at any stage. As stated by the Director of the National Centre of Disease Control and Public Health, Amiran Gamkrelidze, the deceased person should be buried within 72 hours and traditional practises of offering condolences and holding memorial services and after funeral receptions should not take place.

As of 4 April 2020, there are 157 confirmed cases of the novel coronavirus in Georgia. Of this amount, 28 patients have recovered and one has died.

• For three months, the Government of Georgia will fully pay the utility bills of families which consume less than 200 kwt/h energy and less than 200 cubic metres of natural gas per month.

• A new algorithm for COVID-19 testing was approved. Apart from patients with symptoms, patients with fever and high-risk groups (people who had contact with an infected person, healthcare workers, people employed in institutional establishments) would also be subject to testing for the novel coronavirus.

According to the new algorithm, rapid antibody and antigen tests will soon be used to detect COVID-19 in addition to laboratory diagnosis based on the PCR method.

From 08:00 in the morning until 21 April, a nationwide lockdown was declared in Georgia.

• A so-called curfew is in effect from 21:00 until 06:00 every day. In this period of time, the movement of pedestrians and transport is prohibited throughout the country.

• All types of public transport (including subway) are fully suspended. Private vehicles (including taxis) are allowed to travel with a maximum of three people.

• Gatherings of more than three people are prohibited. The exceptions are grocery stores and pharmacies where two metres of social distance has to be observed.

• People over 70 years of age are allowed to leave their houses only if they go to the nearest grocery store, nearest pharmacy or nearest medical facility.

• All citizens are required to carry their IDs with them.

As of 31 March, there were 110 confirmed cases of the novel coronavirus in Georgia. Of this amount 21 patients have recovered.

According to the decision of the Ministry of Justice on 30 March, 780 employees of penitentiary facilities will live in prisons for the next several weeks in order to avoid any import of the virus.

According to the information of the Director of the National Centre for Disease Control and Public Health, Amiran Gamkrelidze, the source of infection of three patients who tested positive for COVID-19 is unknown. This means that the international transmission process had started in the country. Mr Gamkrelidze said that for the next four weeks the country faces the danger of a large-scale outbreak of the epidemic.

Since 29 March 2020, stringent measures have been taken in the Samegrelo-Zemo Svaneti region to prevent the spread of the coronavirus:

• Public transport was suspended in the region.

• Check-points were set up at the entrances and exits of the municipalities.

• Maximum allowed passengers in private vehicles are three and all passengers are required to wear face masks.

As of 28 March, there was one confirmed case of COVID-19 in Zugdidi. The introduction of stringent measures is linked to the region’s close geographic proximity to the occupation line. The United States will provide USD 1.1 million to aid Georgia’s healthcare sector.

As of 28 March, there were 90 confirmed cases of COVID-19 in Georgia with 16 recovered patients.

A contract with a Chinese company to purchase 215,000 rapid test kits for the coronavirus was cancelled because of the questionable quality of the tests.

Georgia uses the PCR method for the diagnosis of the coronavirus in special laboratories. Currently, Georgia does not have rapid tests which is critical for mass testing. According to the information of the Ministry of Health, negotiations are in progress with another company for the purchase of the rapid tests.

As of 27 March the number of confirmed cases in Georgia increased to 83 with 14 recovered patients.

According to the decision of the authorities, all types of intercity transport were suspended in Georgia. The Marneuli and Bolnisi municipalities were declared a stringent lockdown zone. The list of prohibitions is as follows:

• Entrance and exit vis-à-vis Bolnisi and Marneuli were prohibited.

• Movement of citizens within the territory was banned (locals are allowed to go out only to purchase food and medicine or to receive a medical service).

• All facilities are closed except pharmacies and grocery stores.

On 22 March, a case of a coronavirus internal transmission was confirmed in Marneuli. A woman from Marneuli tested positive for the coronavirus. Epidemiologists have not identified the source of her infection thus far. This led to the decision to take radical measures.

In spite of the state of emergency in the country, Sunday services were held in churches and parishioners received communion from a shared spoon.

21 March 2020 – State of emergency was declared in Georgia

• All types of assemblies, demonstrations and public gatherings are prohibited (as clarified by the Prime Minister, a gathering of more than ten people is prohibited).

• International air, land and sea transport services for transportation of passengers were suspended with the exception of cargo transport.

• Relevant bodies are authorised to forcibly transfer a person to a respective place for violations of the isolation or quarantine rules and respective penalties will be applied to the perpetrators.

• Court hearings can be held remotely.

• A person will be fined GEL 3,000 for failure to comply with the state of emergency whilst the fine will be GEL 15,000 for legal entities. A person will be held criminally liable for a repeated offence; in particular, imprisonment for up to three years.

In addition, the Government of Georgia is authorised to restrict other constitutional rights, including:

• To restrict property rights for quarantine, insulation and medical purposes in line with its terms and to use the property and material means of both individuals and legal entities.

• To ban or restrict certain activities of private legal entities as prescribed by the ordinance or order them to carry out a specific activity.

At the present moment, the state of emergency does not envision:

• Declaration of a curfew.

• Restrictions on the media.

As clarified by the Prime Minister, restrictions on gatherings of more than ten people will be applied to the church as well.

However, as stated by Speaker of the Parliament of Georgia, Archil Talakvadze, the President’s decree allows the restriction of the freedom of assembly but there are no restrictions to the right of religion and belief.

The Public Defender of Georgia, Nino Lomjaria, said that restriction on freedom of assembly under the state of emergency applies to any type of assembly, including the church. As clarified by Ms Lomjaria, the decree itself does not provide exceptions and indicates that any exceptions would be at the discretion of the Government of Georgia.

As of 21 March, there were 49 confirmed cases of the coronavirus in Georgia.

In spite of the increased danger of an outbreak of the coronavirus, the Holy Synod of the Georgian Orthodox Church ruled against suspending church services and declared that no changes will be made to the rule of communion from a shared spoon.

The Coordination Council made a decision to close all shops in Georgia except grocery stores, pharmacies, petrol stations, the postal network and banks.

As of 19 March, there were 40 confirmed cases of the coronavirus in Georgia.

Georgia’s borders were temporarily closed for foreign nationals from 18 March.

On 18 March, mini-buses were suspended.

As of 18 March, there were 38 confirmed cases of the coronavirus in Georgia.

Cafes, bars and restaurants were given a recommendation to limit the service and keep the delivery option only.

The authorities called on citizens over 70 years of age to remain self-isolated.

Travel between Georgia and Russia was suspended.

As of 16 March, there were 33 confirmed cases of the coronavirus in Georgia.

Movement of citizens across Georgia-Armenia and Georgia-Azerbaijan borders was temporarily suspended.

After the World Health Organisation (WHO) declared the coronavirus outbreak a pandemic, from 12 March all bodies of the Government of Georgia started to work 24/7 in an emergency mode.

All public and private entities were given the recommendation to start telework.

Since 12 March, passengers coming from Germany, France, Spain and Austria have been subjected to mandatory quarantine or self-isolation after a check-up at the border.

The summer draft for military conscripts was postponed until 13 April.

As of 12 March, there were 25 confirmed cases of the coronavirus in Georgia.

Direct flights between Italy and Georgia were suspended.

From 6 March, a 14-day mandatory quarantine or self-isolation was announced for passengers travelling from high-risk zones.

As of 6 March, there were nine confirmed cases of the coronavirus in Georgia. Of them, seven cases were related to travel to Italy.

The Coordination Council led by the Prime Minister of Georgia issued a recommendation to cancel mass events in places of public gathering.

According to the decision on 1 March, the educational process in schools, kindergartens and universities was suspended.

At that time, there were three confirmed cases of the novel coronavirus in Georgia

The first case of the coronavirus was confirmed in Georgia. A Georgian national, coming from Iran through Azerbaijan, tested positive for COVID-19. From that day, all types of travel between Georgia and Iran were suspended.

Measures taken prior to the first confirmed case:

29 January – Flights to China was suspended.

28 January – The Government of Georgia approved an action plan for the prevention of the spread of the coronavirus.