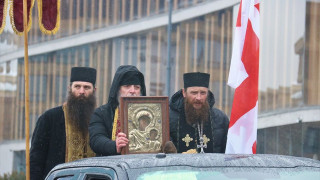 Legally Granted Rights to Believers – What Can the Authorities Change?

Restrictions require an independent normative act which authorities have not yet adopted.

Article 16 of the Constitution of Georgia protects the human right to believe in God, freely choose and practice any religion, belief or creed and have and express one’s opinions and live in line with them. The freedoms of belief and religion include two components, inner and outer dimensions.

Inner freedom is about the internal world of each individual. It lies beyond the scope of state jurisdiction and the state should not restrict it. The outer dimension is related to the freedom to express and manifest belief and faith. This is a person’s right to manifest his belief by way of worship and practice individually and separately or with others in public through faith, teaching, preaching or performing rules and rituals.

Restrictions can only be put on the external manifestation of belief if it is envisioned by the law, necessitated by public safety interests in a democratic society (or if restrictions are needed to protect public order, health or the morals, rights and freedoms of others as stipulated by international standards (see FactCheck’s article for more details).

On 30 March 2020, in order to curb the spread of the novel coronavirus, the Government of Georgia decided to tighten restrictions. For the duration of the state of emergency a curfew was imposed. The curfew is in effect from 21:00 until 06:00 and in this period of time the movement of pedestrians and transport is prohibited throughout the country.

In light of the upcoming Easter celebrations, the issue of the restriction of the freedom of belief and religion has once again become controversial. Many in the public are taking interest in whether or not parishioners in churches will fail to comply with the regulation of banning the gathering of more than three people and if curfew rules will be extended to the faithful to prevent them from going to churches for Easter evening services.

The Minister of Internal Affairs of Georgia, Vakhtang Gomelauri, replied vaguely to a journalist’s question about whether or not parishioners would violate the curfew during the Easter services if they go to churches before 21:00 and stay there before 06:00 in the morning. The Minister answered with a question: “If that is the case that parishioners will enter churches and not leave until 06:00, do you think that would constitute a violation?” The Minister also added that the authorities did not have a final agreement with the Patriarchate on how the Easter liturgy would be conducted under the so-called curfew.

In regard to the curfew, it one of the restrictions stipulated by the state of emergency which envisions a complete suspension of movement for a certain period of time. The emergency decree does not restrict the freedoms of belief and religion. The freedoms of belief and religion protect a person’s right to manifest his belief and worship and practice individually or with others. This means that a person should be entitled to move freely in order to take part in religious ceremonies. Both Georgian and international legislation upholds a much higher standard of protecting the freedoms of belief and religion as compared to protecting the freedoms of expression, assembly and movement. Therefore, the restriction of the freedom of movement cannot be applied to a person who moves from one place to another (for instance, from home to church) to take part in collective worship. Nevertheless, it is hard in practice to differentiate to whom the curfew should be extended and who is exempt because it is impossible to ascertain and verify motifs of every person walking in the street. Therefore, we once again call upon legislative and executive governments to enact appropriate amendments in a timely manner. In this situation, when the state of emergency was declared to tackle the new coronavirus and the country entered the epidemic’s internal transmission phase, it is vitally important to temporarily restrict the right of participation in collective worship.