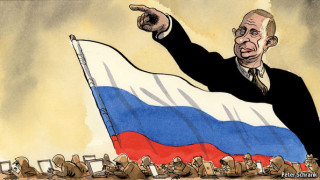 How the Kremlin Exploits the Coronavirus to Circulate Disinformation

According to the EU, the Kremlin’s disinformation circulates in several languages, including English, Spanish, French and German. In addition, the Kremlin is disseminating incompatible coronavirus theories to sow chaos.

According to the EU, the Kremlin’s disinformation circulates in several languages, including English, Spanish, French and German. In addition, the Kremlin is disseminating incompatible coronavirus theories to sow chaos.

Russia’s propaganda machine continues to operate at full capacity even during a global pandemic. As stated by the European Union, pro-Russian media is circulating disinformation about the coronavirus. Moscow seeks to tear the population of the countries apart, sow discord and distrust toward the European healthcare system among them. According to the EU, the Kremlin’s disinformation circulates in several languages, including English, Spanish, French and German. In addition, the Kremlin is disseminating incompatible coronavirus theories to sow chaos. The EU report highlights the main messages of Russian propaganda - that migrants brought the coronavirus to Europe and it is a biological weapon produced by the USA, the UK or China.

In addition to the EU, following the statements of the US government officials, Agence France-Presse (AFP) has also accused Russia of circulating fake news about the coronavirus which prompted Maria Zakharova, Spokesperson of the Ministry of Foreign Affairs of the Russian Federation, to dismiss those accusations as “deliberately fake.”

Media agencies, which circulate Russian propaganda, are also actively operating in Georgia and seek to mislead the public by being manipulative and promoting conspiracy theories.

Propaganda about the Lugar Laboratory

The Lugar Laboratory has been targeted by Russian propaganda for years. Since the very first day of the coronavirus outbreak in Georgia, the disease cases are being identified at the Lugar Laboratory and the National Centre for Disease Control. Nevertheless, pro-Russian media defiantly continues to circulate conspiracy theories about the Lugar Centre.

The pro-Russian online media outlet, News Front, published an article entitled “Coronavirus did not Originate in China! Hello, Lugar Laboratory!” (this article was published on tvm.ge as well). Their accusation is based on the Chinese version floating around in the last few days. The representative of the Chinese Ministry of Foreign Affairs stated on Twitter on 12 March 2020 that the coronavirus (CoVid-19) originated not in China’s Wuhan but in the USA and spread from there. Prior to this statement, China had considered Wuhan’s seafood market as the source of the coronavirus’s origin. On 13 March, in the next tweet, the Chinese diplomat shared an article written by Global Research, a pseudo-scientific think-tank, which circulates conspiracy theories, and asked people to repost it. According to Global Research, US service members brought the coronavirus to China, albeit accidentally and not intentionally. In accordance with this theory, the virus’s origin can be traced to Fort Detrick’s biological laboratory and not the Wuhan market.

The US Department of State dismissed Beijing’s information as “rumours” and called upon China to stop circulating disinformation. News Front, based on Global Research, notes: “Since there were 1,059 cases of the leakage of pathogens from US secret laboratories from 2005 to 2012, this option gains more and more credibility” and mentions the Lugar Laboratory in this context. News Front tries to develop a similar conspiracy theory in its myriad of publications. In the article, “Single-celled Nazis and the Lugar Laboratory,” News Front on the one hand. seeks to undermine the importance of the Lugar Laboratory in the fight against the coronavirus and, on the other hand, recites suspicions about the Laboratory’s real functions.

News Front repeats one of the strategic narratives of Russian propaganda which claims that a biological weapon is being produced in the Lugar Laboratory. In 2018, General Igor Kirillov, Commander of the Russian Armed Forces' Radiological, Chemical and Biological Defence Troops, said that the United States is using laboratories in Georgia to research ways to deliver and unleash biological weapon agents in breach of international accords. In addition, during one of her press briefings, Maria Zakharova, Spokesperson of Foreign Affairs Ministry of Russia, stated that the bio-laboratory in Georgia represented one of many examples of the US establishing army medical institutions in Russia’s neighbouring countries where military personnel is carrying out experiments on Georgian citizens and breaching medical ethics as well as the norms of international law. The President of Russia, Vladimir Putin, has also joined the disinformation campaign and declared that “these studies are related to the latest achievements in the field of genetics and that drugs are being developed that can influence people, depending on their belonging to one or another national group.”

In reality, the laboratory’s scope of work includes conducting epidemiological and laboratory supervision of infectious and non-infectious diseases as well as the timely detection and research of disease cases, epidemiological outbreaks and other threats to public health situations. The coronavirus pandemic further highlighted the importance of the Lugar Laboratory. It is thanks to this laboratory that Georgia is able to detect the disease in a timely manner. Amiran Gamkrelidze, Director of the National Centre for Disease Control, even stated that without the Lugar Laboratory, they would have devised a new technique for disease technology and coronavirus testing which naturally would have increased the time for detection. He also said that the only country having questions about the Laboratory is “our big neighbour country” which has political aims in this regard. Paata Imnadze, Head of the Lugar Laboratory and the Deputy Director of the National Centre for Disease Control, has stated multiple times that “Russia deliberately circulates disinformation” about the Lugar Laboratory.

Disinformation Against the USA and NATO

Saqinform, too, used the coronavirus issue to discredit the USA and NATO. As claimed by Arno Khidirbegishvili, Editor-in-Chief of Saqinform, CoVid-19 was created in the USA and launched in China. However, he also claims that as early as in 1991, the USA spread COVID-91 in the Soviet Union which harmed brains, not lungs, and as a result the USSR was dissolved and the “memory of Stalin’s glorious deeds” vanished. Mr Khidirbegishvili opines that people lived friendly for 70 years in the USSR whilst after gaining independence, Georgia was turned into a US colony, with US ambassador Kelly Degnan as its real ruler.

Saqinform actively seeks to use the coronavirus as an example against NATO. For instance, Saqinform states that military personnel participating in the “Defender Europe 2020” military exercise together with NATO and the US would most likely be infected and, therefore, thinks that Georgia has to refuse to conduct this exercise. Certainly, the author does not have any evidence to corroborate this claim. In his next article, Arno Khidirbegishvili repeated the same: “In the nearest future, at least 14,000 military service members without face masks will pour out onto Georgia from the skies like God’s punishment and the majority of them will probably be infected by the coronavirus.” Conspiracy theories, disseminated by Arno Khidirbegishvili, are fully in line with the Kremlin’s propaganda. In a similar fashion, as early as February 2020, Russian propaganda in Lithuania was spreading fake news that a US soldier in Lithuania was ostensibly infected with the coronavirus.

Disinformation About the EU

In order to discredit Georgia’s Euro integration process, News Front used information published by the founder of the pro-Russian Eurasian Institute, Gulbaat Rtskhiladze, in social media and blamed the EU-Georgia Association Agreement for the coronavirus outbreak in Georgia. Given the world pandemic, none of the countries is safeguarded against the infection. The World Health Organisation declared the coronavirus outbreak as a pandemic and it poses a global problem. As of 19 March 2020, COVID-19 cases were confirmed in 172 countries and territories. Certainly, blaming any agreement as the reason behind the virus outbreak is illogical and represents an example of clear disinformation. In addition, by using the coronavirus, Gulbaat Rtskhiladze tries to persuade readers that as a result of the coronavirus outbreak, most of Georgians will turn their backs on Europe.

The Facebook page, Politicano, also manipulatively responded to the coronavirus pandemic. Politicano posted a photo with the following caption: USA: Giving USD 1.5 Trillion to Banks, UK: Tries to Form a “Herd Immunity,” Italy: Collapsed. In contrast: China: Builds Hospitals, Cuba: Hands Out Antiviral Drugs, Vietnam: Created Fast Tests for the Coronavirus, North Korea: Checks Travellers’ Health and Healthcare is Properly Done only under Socialism! News Front also published the aforementioned Facebook post. In fact, the caption of the photo is wrong. Cuba has not produced an antiviral drug. Work to produce a vaccine is in progress precisely in the US and other Western democratic and developed countries whilst travellers’ health is checked in almost every country. In regard to North Korea, authorities state that they have confirmed cases of the coronavirus infection, although it is reported in the media that North Korea hides this information and there are 180 deaths in the North Korean army alone with nearly 3,700 soldiers being quarantined. Therefore, Politicano’s information is false and taken out of context.

A pro-Russian outlet, Saqinform (Saqinform.ge) is owned by the pro-Russian organisation, Historical Legacy LTD, which also holds the ownership rights of Georgia and the World. The editor of Saqinform, Arno Khidirbegishvili, professes an openly pro-Russian narrative with false emphasis on the Kars Treaty, criticism against the Anaklia seaport and equating the latter with an American naval base, etc. Of note is that Arno Khidirbegishvili’s articles are published in such anti-Western Russian internet portals as regnum.ru and sputniknews.ru’s Georgian outlet, sputnik-georgia.ru.

News Front’s Georgian office is part of News Front managed from the annexed Crimea and apart from Georgian also operates in eight additional languages. News Front was founded in 2014 and based on different media reports, it gets funding from Russia’s Federal Security Service (FSB). It disseminates fake news and disinformation all around the world. In New Front’s international news sections, one can find materials of such Russian state media outlets as Russia Today, Sputnik and RIA Novosti. News Front’s Georgia office has circulated fake news multiple times, including the one about the coronavirus. It disseminates Russian propaganda in Georgia. Its editor is Shota Apkhaidze and its Facebook page administrator is Konstantine Chikviladze. Mr Chikviladze is also the administrator of Georgia and the World’s Facebook page. In regard to the source used by the Chinese Ministry of Foreign Affairs and News Front, Global Research is a pseudo-scientific think-tank circulating conspiracy theories. It has been highlighted for spreading fake news and Media Bias / Fact Check assess its factual accuracy as “Low.”

The Facebook page Politicano is an anti-capitalist, Eurosceptic and left-leaning political-economic portal with 24,000 subscribers. It has been highlighted for spreading the fake news. The page administrator is Giorgi Mdivani who took part in a discussion on 30 January 2020, entitled “What is Wrong with Us, Why and What will Save our Country?,” which was held at the office of Georgia and the World and organised by the Historical Legacy non-governmental organisation and attended by pro-Russian activists. At the discussion, Mr Mdivani delivered a speech criticising NATO, capitalism and liberalism. Of note is that Historical Legacy publishes the pro-Russian Georgia and the World newspaper. One of the members of the NGO’s Public Council is Aleksandre Chachia who was awarded by the Russian President, Vladimir Putin, the Order of Honour to recognise his “contribution to expanding friendship and cooperation with the Russian Federation and to the development of scientific and cultural ties.”