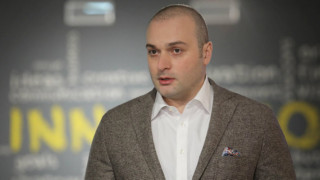 Mamuka Bakhtadze: In the course of this year, the current account deficit decreased from 13% to 4.5% (estimate for 2019) which is an unprecedented success all over the world

Verdict: FactCheck concludes that Mamuka Bakhtadze’s statement is a LIE.

The former Prime Minister of Georgia, on his resignation day, spoke about economic achievements at a meeting with journalists. The former Prime Minister also touched upon the current account deficit. Mamuka Bakhtadze stated: ““In the course of this year, the current account deficit shrank from 13% to 4.5% (estimate for 2019) which is an unprecedented success all over the world.”

The current account is part of the balance of payments. The latter is a statistical account which details economic relations and transactions between a particular country and the rest of the world. The current account itself includes goods and services, and primary and secondary revenues. This means that a current account shows the difference between a country’s trade balance and revenues. It is the trade balance that constitutes the main part of the current account and shows whether or not production exceeds consumption in a country. In the case of Georgia, goods and services produced are less as compared to consumption. Therefore, Georgia has a negative trade balance meaning that the import of goods and services exceeds export. In this case, the current account runs with a deficit and is primarily affected by changes in export and import. In turn, sources to offset the deficit are capital transfers, foreign investments and foreign debt. This is put into capital and financial accounts. Of note is that there are several “natural” and “artificial” reasons behind a decrease in a deficit. As mentioned previously, most of a current account is the export-import balance and, consequently, a stricter trade policy is largely assumed as belonging to the “artificial” reasons for a deficit reduction. In regard to “natural” causes, they are mostly as follows: a high growth rate in export sectors (positive), decreased import as a result of a drop in local consumption (negative) and changes in a national currency’s real exchange rate vis-à-vis the world’s major trade currencies.

In 2013, the current account deficit was -5.92% of the GDP which was the lowest figure since 2000. The reason behind the decreased deficit in 2013 was changes in export and import as compared to the previous period. In particular, the import of goods and services increased by 1.34% (USD 122.6 million) in 2013 whilst export increased by 19.11% (USD 1,150.6 million). Separately, the picture in terms of the export and import of goods component was as follows: in 2013, the import of goods increased by 0.15% (USD 11.8 million) whilst export increased by 21.15% (USD 731.7 million). This does not indicate an improvement of the well-being of the country’s population because the decrease in import was caused by a reduction in local consumption instead of meeting demands with local production. In 2013, the real figure of private consumption decreased by 0.08% whilst the total GDP increased by 3.4% and this was the result of increased foreign demand. The latter contributed to the higher growth rate of export. In turn, in the export component, the significant growth was related to the export of goods where tourism figures had a notable and significant impact. After all the aforementioned, the current account deficit constituted 13.15% of the GDP in 2016. The former Prime Minister, in his statement, refers to that year whilst making the comparison with the estimated figure for 2019. In turn, the current account deficit worsened by 0.52 of a percentage point as compared to the previous year and this was caused not by a trade deficit but by a decrease in primary income.

There are multiple economies in the world which decreased their current account deficit in a two-to-three year time span with much more percentage points as compared to the decrease in Georgia’s case. Therefore, the former Prime Minister’s statement where the decrease of the deficit is stressed as an “unprecedented success all over the world” is a lie. Furthermore, the reduction in the current account deficit does not give information about the improvement of the economic situation. As mentioned previously, one of the reasons for a decrease in a current account deficit could be a drop in local consumption and, consequently, in imports, which on the contrary indicates a deterioration of a population’s economic situation.

In 1998-2018, Armenia had a current account deficit which constituted 8.95% of the GDP on average. Armenia had its highest deficit figure in 1998-2001 when the average figure was -16.28%. In the following two years, the deficit decreased to almost -6% whilst it decreased further to -2.38% on average in 2004-2006. However, during the world financial crisis, Armenia’s current account deficit increased and reached -16.48% in 2009. Since 2010, it has been characterised with a decrease trend and in 2016 it even dropped to -2.26%. Therefore, Armenia’s economy has had a higher percentage figure of reduction in its current account deficit as compared to Georgia’s case.

Graph 4: Current Account Deficit in Georgia and Other Countries (%)