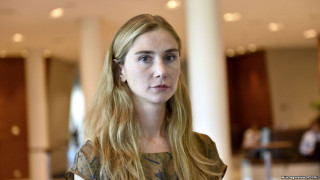 There is a direct correlation between air pollution and lung cancer as well as other diseases. In Georgia, there is a visible dynamic of growth in respiratory diseases in 2012-2016

Resume: As a result of research studies carried out in 53 countries of the World Health Organization’s (WHO) European Region Member States, it was confirmed that cardiovascular and respiratory diseases as well as type 2 diabetes and cancer are directly linked to air pollution and climate change.

In regard to the attitude and the position of the Georgian population in regard to pollution, these issues have featured among topics of local importance in NDI public opinion polls since 2015. In accordance with the 2015 August poll, 20% of the surveyed population emphasised that the pollution issue was problematic. This number was 18% in June 2016 and 22% in June 2017. It was 23% in December 2017 and 22% in December 2018. Pollution is particularly strongly believed to be problematic in Tbilisi because local surveys identified pollution as number one on the list of local pressing problems in annual rankings. This issue is important for other urban centres (Batumi, Zugdidi, Rustavi, Poti, Gori, Kutaisi) where it is ranked second among the problematic issues.

United National Movement MP, Tina Bokuchava, in her speech at the plenary session of the Parliament of Georgia, stated: “In accordance with the joint research study of the World Health Organization, European Union and the Organization for Economic Co-Operation and Development, which was carried out in 53 countries, it is confirmed that there is a direct correlation between air pollution and lung cancer. In addition, there is also a direct correlation between air pollution and other diseases… In accordance with the National Center for Disease Control and Public Health, now in Georgia itself, there is already a dynamic of growth in respiratory diseases in 2012-2016 which is related to deteriorated air quality. Multiple research studies now attest that there is an atmospheric air quality problem in the country. These include research studies which were carried out at the behest of international organisations where people name air pollution as one of the main problems.”

Since 1989, 53 countries of the World Health Organization’s European Region Member States have been holding ministerial meetings for environment and health issues. At the ministerial meeting held in April 2015, the countries discussed the findings and the objectives of a research study which indicates that health related problems, such as cardiovascular and respiratory diseases as well as type 2 diabetes and cancer, are directly related to air pollution. Air quality is a significant determinant of environment protection. In accordance with the World Health Organization’s 2014 research study, 600,000 premature deaths in European Region Member States in 2012 were the result of diseases caused by air pollution. In most cases, death was a result of ischemic heart diseases, respiratory infections, chronic obstructive pulmonary diseases and lung cancer.

The main cause of chronic lung obstructive disease is tobacco smoke. Other risk factors also include: indoor air pollution and atmospheric pollution as well as work-related dust and chemicals.

Great efforts have been made in the last year to increase the awareness of the population in regard to environment pollution issues. Therefore, the number of people underlining the acute severity of this problem and their demands for moving it up on the agenda has been increasing. Since 2015, the environment pollution problem is in the top five concerns of local importance in the NDI public opinion polls. In accordance with NDI’s August 2015 survey, 20% of the surveyed respondents at the national level emphasised the importance of the environment pollution problem. This number was 18% in the June 2016 poll, 22% in the June 2017 survey, 23% in the December 2017 survey and 22% in December 2018. Tbilisi’s population believes the air pollution issue to be particularly problematic because it is annually ranked as the number-one problem at the local level. This issue bears importance for other big cities, too (Batumi, Zugdidi, Rustavi, Poti, Gori, Kutaisi) and is number two after road problems. In the latest survey which was carried out in December 2018, 48% of Tbilisi’s population emphasised the importance of the environment pollution problem. Of this amount, 57% highlights the air pollution problems, 44% indicates highlights food safety and 40% highlights the existence of hazardous substances (only three possible answers could be selected for this question). 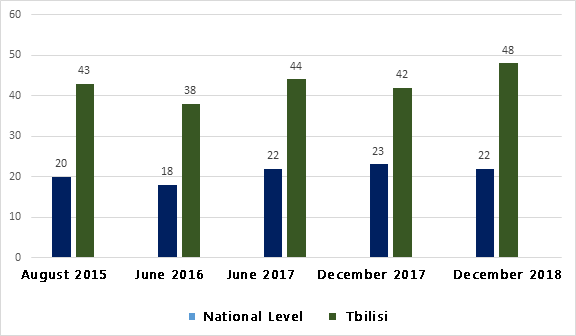