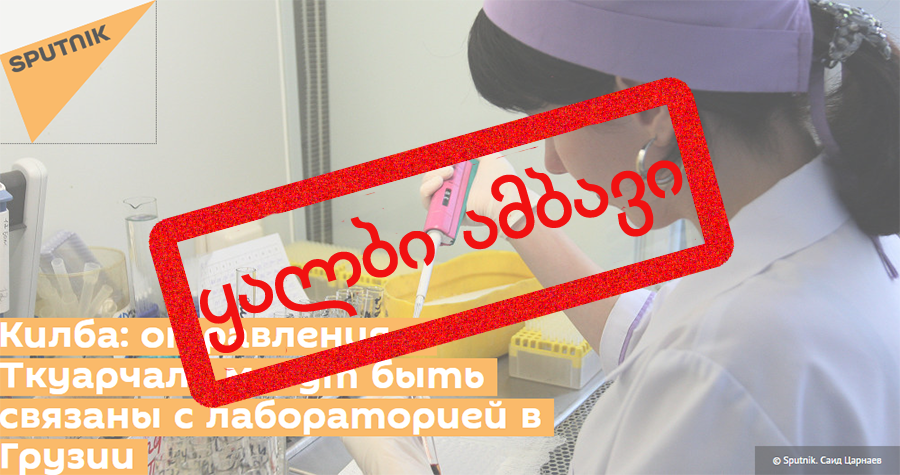 Verdict: Accusation of the de facto government of Abkhazia is FALSE. Resume: The given

The given accusation which was named as one of the reasons for closure of Otobaia-Nabakevi border crossing is devoid of factual evidence. The representatives of the de facto government of Abkhazia follow the footsteps of Russia’s deliberate policy, which for many years has been aiming to discredit Lugar Laboratory in Georgia.

Analysis: On 9 March 2017, Russia’s state news agency www.sputnik-abkhazia.com published an article about closure of Otobaia-Nabakevi border crossing at Georgian-Abkhazian administrative border line. The so called “Secretary of the Security Council” of the occupied region, Mukhamed Kilba was quoted

“According to the information of the Abkhazian side, biological weapons are being produced in the biological laboratory in Georgia which is located close to Abkhazia’s border. We can assume that mass poisonings of children in Tkvarcheli in 2013, as well as swine flu cases of which have been detected here, are related to the activities of that laboratory.”

On 24 November 2013, information about poisoning approximately 300 locals in Tkvarcheli was reported through the internet. According to the information

of Georgia’s Public Broadcaster, at that period, Georgia, in the name of Health and Social Affairs Ministry of the Autonomous Republic of Abkhazia offered medical assistance to the Abkhazian side. Today, the legitimate government of Abkhazia in regard to mass poisoning of locals in Tkvarcheli in 2013, states the following: “The real reason behind poisoning was wrongly installed sewage systems, when as a result of incorrect linkage of pipes, several citizens were poisoned. Of course, any connection of that fact to the Georgian laboratory is a deliberate negative campaign against the Georgian side.”

FactCheck addressed the Ministry of Health, Labour and Social Affairs of Georgia with an inquiry in regard to active laboratories in Georgia and their profiles. We received a reply from the LEPL L.Sakvarelidze National Centre for Disease Control and Public Health. The Centre states that their laboratory network consists of Richard Lugar Centre for Public Health Research

laboratories in Tbilisi and Regional Public Health Departments in Kutaisi, Poti, Batumi, Zugdidi, Ambrolauri, Akhaltsikhe, Telavi, Ozurgeti and Gori. Contrary to the statement of the de facto government of Abkhazia, these laboratories are not working on production of biological weapons and instead they are focused on conducting epidemiological and laboratory supervision of especially virulent, infectious and non-infectious diseases as well as timely detection and research of disease cases, epidemiological outbreaks and other hazardous to public health situations.

The National Centre for Disease Control and Public Health, in its letter

details: “the laboratories carry out:  taking samples for bacteriological and serological diagnosis of especially virulent infections, preparation of samples and transfer for next level research, diagnosis of tuberculosis through bacterioscopic method, timely detection of epidemiological outbreaks of infectious diseases (bacteriology, serology), providing laboratory services (bacteriology, serology) to medical service providers, conducting sanitary – microbiological and serological researches for municipal programmes and medical facilities.” According to the Centre’s official position, tying the activities of the laboratories to the incident in Tkvarcheli is a wild allegation and the Centre has fully prepared materials about laboratories’ activities for the Georgian delegation to be presented at Geneva Talks.

Mass poisoning in Tkvarcheli (24 November 2013), was preceded by the statement

of the Chief Sanitary Inspector of the Russian Federation, Genadi Onishchenko, about Lugar laboratory which he made on 17 October 2013. Mr Onishchenko stated that the biological laboratory which was opened in Georgia with US assistance was in fact a facility to produce biological weapons and threatened that if Georgia did not close that laboratory, export of Georgian products to Russia would face difficulties.

Genadi Onishchenko stated: “The objective of that laboratory is to study the situation in regard to natural places of origin of the virus circulation in Russian Federation and Transcaucasus and prepare prescriptions, which could be used to destabilize economic and political situation in the country. We are talking about the possibility of its covert usage and we already have some examples.” However, he has not named a single specific fact in this regard.

Vilification of the Lugar Laboratory has been ongoing for years by the anti-western information agencies and local pro-Russian public figures. Back in 2014, Media Development Foundation included that trend in its research. The organization has found out that pro-Russian individuals and media outlets have been mudslinging the laboratory without any factual evidence.