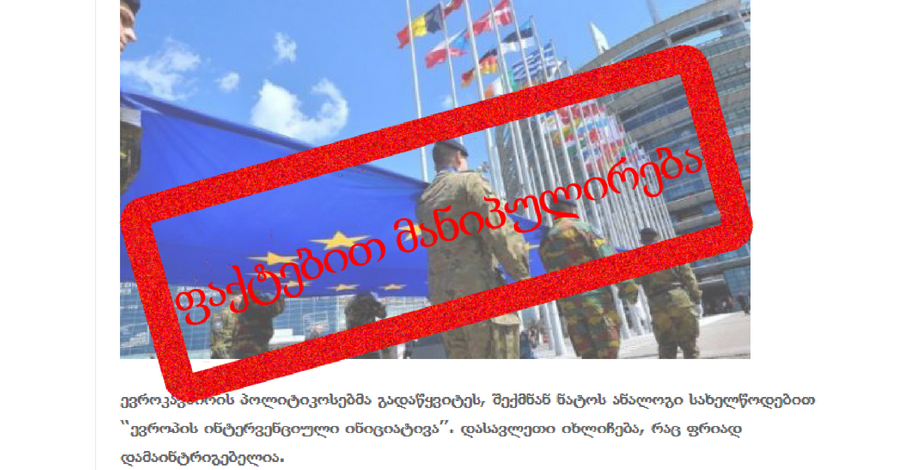 European NATO Analogue: There is a Rift between Western Countries

Verdict: The news disseminated by Georgia and the World is a MANIPULATION OF

Views: 3335
Manipulation of Facts
The facts revealed in the statement are more or less correct, but the full context is deliberately distorted
Facebook Linkedin Twitter Print
Verdict: The news disseminated by Georgia and the World is a MANIPULATION OF FACTS. Resume:

The Georgia and the World media outlet used the initiative of the French President, Emmanuel Macron, known as Macron’s European Vision, and claimed that Europe is creating a NATO analogue and that the West is being split up. Using President Macron’s words in such a manner is a manipulation of facts because the initiative of the President of France, which does not envisage a NATO analogue, is not aimed at fracturing Europe but instead champions the idea of a united Europe.

Analysis The Georgia and the World media outlet published an article

entitled “European NATO Analogue: There is a Rift between Western Countries.” The author of the article writes that EU politicians decided to establish an organisation called Europe’s Intervention Initiative which is analogous to NATO. After giving the facts, the author claims that the “West is being split up, which is very intriguing.” The facts presented in the article are not true and the author’s rhetoric aims at discrediting the EU and NATO.

On 26 September 2017, in his speech at the Sorbonne University, the then newly-elected President of France, Emmanuel Macron, voiced his multi-directional Initiative for Europe - A Sovereign, United and Democratic Europe (the initiative is also called

The sub-parts of the Sovereign Europe are: a Europe that guarantees every aspect of security, a Europe that addresses the challenge of migration, a Europe looking to Africa and the Mediterranean, a Europe exemplary in sustainable development, a Europe of innovation and regulation adapted to the digital world and a Europe standing as an economic and monetary power.

Of these components, the first one – a Europe that guarantees every aspect of security, includes the Europe Intervention Initiative which Georgia and the World discusses in the aforementioned article.

Emmanuel Macron’s Europe Intervention Initiative envisions the elaboration of a common European defence doctrine as well as a common budget and intervention plan for active measures. In addition, Europe’s common defence fund needs to be augmented as it will be responsible for training European forces in accordance with the unified vision. In particular, when it comes to the fight against terrorism, the intelligence services of the European countries should have closer connections and a unity of vision. In every aspect of security, the unity of Europe has to be ensured.

Apart from the ideological meaning of a united Europe, in his lengthy speech

President Macron also spoke about specific measures which can make the European Union more unified, flexible and successful. For instance, he voiced the idea of cutting the European Commission personnel (down to 15 members).

Later on, Reuters reported that France and Germany were working together on President Macron’s initiative. As illustrated by his initiative and its subsequent assessments,

Europe is not creating a NATO analogue and Europe is not being split up. On the contrary, President Macron’s initiative is aimed at having a unified Europe, not a fractured one, whilst also envisioning the creation of flexible action mechanisms for the European Union.

In addition, this specific plan is President Macron’s initiative and it is unknown whether or not the rest of Europe will endorse it.

Georgia and the World uses Emmanuel Macron’s speech without negating its content but nonetheless manipulating its facts.