Lie
The statement is inaccurate and the assertion in it is absurd
Facebook Linkedin Twitter Print
Verdict: Dimitri Kumsishvili’s statement is LIE. Summary:

A four-point government plan was officially presented to the Government of Georgia in November 2016. A particular component of the plan was already initiated in 2016 through a tax waiver of reinvested portions of revenue.

The source, mentioned in Dimitri Kumsishvili’s statement, referring to Georgia as one of the top five most successful reform-conducting countries, is based on evidence of reforms which took place in various countries between 2004-2015. For Georgia, the data are from the period of 2000-2013 whereas the analysis concerns those reforms carried out after 2004 in the post-Rose Revolution period and the results which they achieved.

Even the most successful reforms carried out within the framework of the abovementioned four-point plan are not included within the scope of the analysed period. Therefore, the Minister’s statement that Georgia’s placement in the top five most successful countries is because of his government’s tax reforms is without ground.

Analysis The First Deputy Prime Minister and Minister of Economy and Sustainable Development of Georgia, Dimitri Kumsishvili, spoke at a public lecture at the University of Business and Technologies and stated

that Georgia’s placement in the top five most successful countries for tax reform, as published by the International Monetary Fund two weeks ago, is proof of the success of the government’s four-point plan vis-à-vis tax reform.

the government’s four-point plan at the first meeting of the newly updated government on 29 November 2016. According to the government program, the plan envisaged economic, education, public administration and spatial arrangement reforms. In particular, the economic reforms included measures for promoting and strengthening the private sector, including introducing tax stimulations with reforms to the revenue tax being one of the important components. Under the new law, any reinvested portion of revenue was exempted from tax. The respective amendment was made to the Tax Code in May 2016 with the new taxation rule having been active since 1 January 2017.

As for Dimitri Kumsishvili’s statement that Georgia was listed among the top five most successful tax reform implementers, this concerns the March 2018 issue of the International Monetary Fund’s quarterly publication, Finance and Development, which included a section entitled “Raising Revenue” which is based on the soon to be published research of its group of contributing authors. [1]

The research refers to Georgia, Cambodia, Liberia, Ukraine and Guyana as examples of successful countries that have managed to increase their tax revenue under the circumstances of tax reforms. The published part of the research focuses on the Georgian example. It specifies that only those tax reforms carried out between 2004-2015 are considered. In addition, different periods are taken for different countries (periods when active reforms were conducted). For instance, the period is 2002-2011 for Ukraine and 2008-2015 for Cambodia. 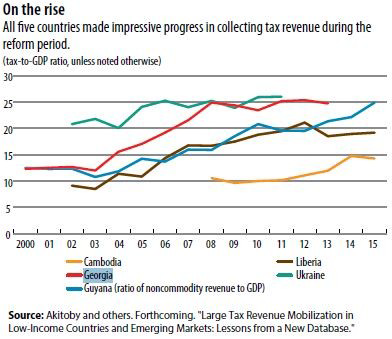 The study uses data from the period of 2000-2013 for the case of Georgia. The analysis focuses on the reforms carried out after the Rose Revolution, the decrease in the amounts of taxes and interest rates and measures to facilitate and support tax legislation, including the active introduction of information technologies and the eradication of corruption. The increased share of tax revenues in relation to the GDP against the background of decreased bureaucracy and taxes themselves is given as a measure/evaluator of success.

The so-called four-point plan, as mentioned by Dimitri Kumsishvili as the factor determining the result, was not introduced nor in operation during the period selected for the research which means that it could not have possibly affected the results. The publication does not include any references to the activities carried out by the acting government and the main accent is placed on the substantively improved indicators of tax mobilisation in 2004-2011.