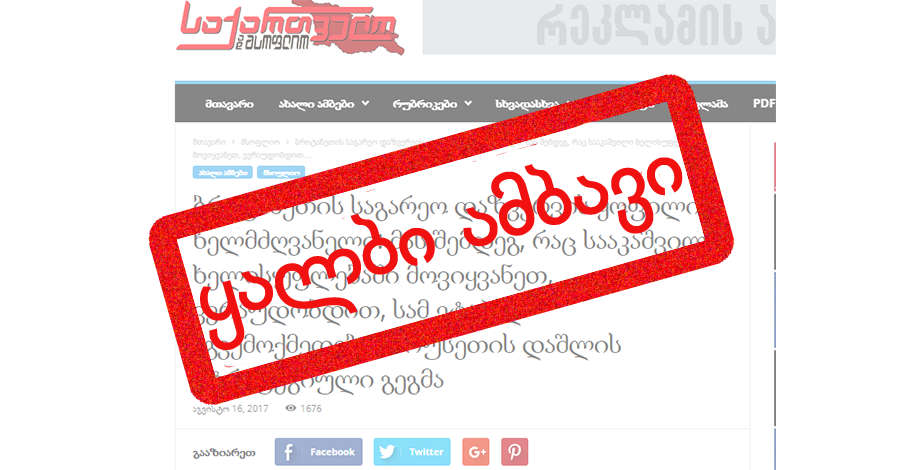 According to the former Chief of the UK’s Secret Intelligence Service, bringing Saakashvili to power was part of the West’s special operation aimed for disintegration of Russia

Verdict: The information spread by Sakinformi and Georgia and the World is a FAKE

published articles of identical content with scandalous headlines: 1. "Former Chief of UK’s Secret Intelligence Service:  After we had brought Saakashvili to power, we intended to launch in three stages a strategic plan for disintegration of Russia." 2. "Sensation! USA and UK planned to deploy military and intelligence bases in South Ossetia and involve radical Islamists to destabilize the Caucasus!"

First-hand source of these articles was the fake URL created by Kremlin supporter internet fraudsters, which was very similar to the online address of British newspaper The Guardian. Internet fraudsters used the fake address to spread the articles of absurd content, as if the former Head of the UK’s Secret Intelligence Service, John Scarlett,

revealed “three-staged plan for disintegration of Russia.” This article, which was based on false premises, was soon circulated by the Russian media and this is how that fake news ended up in Georgian cyber space.

Analysis: On 16 August 2017, anti-western online media outlets, Georgia and the World and Sakinformi published articles of identical content. The articles included an alleged description of UK’s and USA’s plans against Russia, which was ostensibly revealed by the former Head of the UK’s Secret Intelligence Service, John Scarlett.

According to the article, USA and UK instigated the “Rose Revolution” themselves, because the third President of Georgia, Mikheil Saakashvili was supposed to fulfill their plans and 2008 Russo-Georgian War was its direct result. Apart from that, the article highlights ongoing conflict in Ukraine and annexation of Crimea.

The author of the article tries to persuade the reader that military conflicts between Russia and Georgia and Russia and Ukraine were part of the plan of the UK and USA. The article deliberately misleads the reader and creates impression that active support and cooperation of western countries to Georgia was only because of that scheme. The article published by Sakinformi

has the author’s summary attached, which asserts that after revealing this information, “the incumbent Government of Georgia’s unalternative pro-western foreign policy is now mindless and in need of serious revision.” These words clarifies even better that the article aims to cause discontent among the population to impede Georgia’s Euro-integration process.

Furthermore, the aforementioned fake news has one more aim – to portray Russia as undefeatable. The article highlights that two countries’ plan to disintegrate Russia ended in failure, because Russia had recognized their steps in advance. The article asserts: “Moscow has successfully overcome every obstacle prepared against her and managed to defend the country from the influence of the UK and USA.”

As we have already mentioned, both Sakinformi’s and Georgia and the World’s articles indicate that the interview was published by the internet-newspaper The Guardian, which is a lie. In fact, Kremlin supporter internet fraudsters created the internet-domain similar to The Guardian, which at one glance was not much different from the original. Internet media-outlet The Sunday Times and The Guardian itself have written about that fact. The fraudsters have changed the Latin letter i in the word of Guardian with Turkish ı

and later created a new, visually identical website. After that, false interview was uploaded on the website and spread through social networks. The website was soon blocked and Facebook administration deleted all those posts, which contained the address of the fake website, although internet fraudsters managed to achieve their goals.

The principal target group of that propaganda was not an English-speaking audience. The main addressees of the misinformation were people living in Russia, Georgia and Ukraine. The false interview went viral in Russian media and ren.tv, mpsh.ru, politobzor.net, compromat.ws, tsargrad.tv, politonline.ru, argumenti.ru and others translated and published on their websites. Online media outlets Sakinformi and Georgia and the World used Russian sources and translated that article from Russian. The article of Georgia and the World has Russian online media outlet REN.tv indicated as a source, whilst Sakinformi has indicated only The Guardian

The amount of fake articles, which are spread by ostensibly reliable online media, is no longer a rarity. It is a tested method of the Kremlin supporters.
თეგები:

Not a single tree would be cut down

The National Statistics Office of Georgia