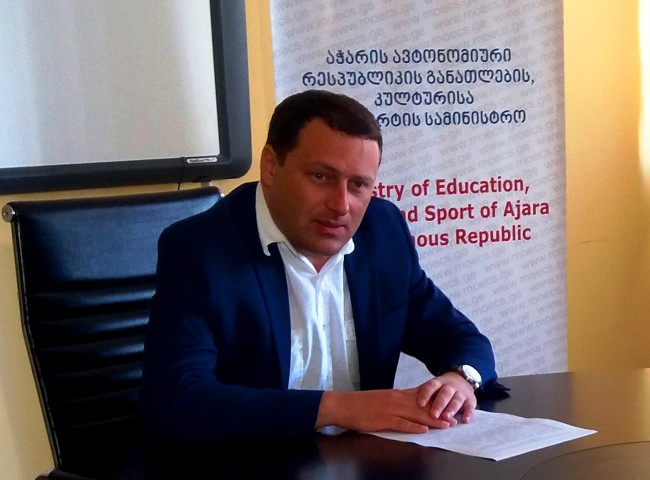 The Deputy Minister of Education, Culture and Sport of the Autonomous Republic of Ajara, Lado

The Deputy Minister of Education, Culture and Sport of the Autonomous Republic of Ajara, Lado Mgaloblishvili, stated: “In Gonio, Mikheil Saakashvili seized the properties of 271 families in a single day. By the decision of the Batumi City Council, however, these properties have been returned to their owners.”

According to the 15 September 2007 Directive No. 525 of the President of Georgia, Mikheil Saakashvili, 271 families living in the Khelvachauri Municipality, in the community of Gonio, were given land plots.

On 3 December 2010, the Property Recognition Commission of the City Council of the Khelvachauri Municipality, upon the request of the Commission for Culture and Monuments Protection of Georgia, started to look into the legality of the transfer of these lands to the families. This ended with the termination of these 271 families’ property licenses. The reason for terminating the property rights was the fact that these land plots were located inside the research and preservation zone of the Gonio-Apsaros Architectural-Archaeological Complex.

Members of the community of Gonio held protest rallies where they demanded that the previous and incumbent governments returned the land which had been seized to their individual owners. Some of the protesters addressed the court in 2011 and complained about the decision of the Khelvachauri Municipality City Council. However, the court did not satisfy the demands of the plaintiffs and left the decision of the City Council in effect. Some Gonio community members complained about the court’s decision to the European Court of Human Rights in Strasbourg four years ago; however, the court has not yet reached a decision.

In 2014, two years after the government changed, a mixed government commission started an administrative investigation at the request of the population of Gonio. Two years later, on 27 June 2016, the Property Rights Recognition Commission of Batumi City Council (the borders of Batumi were extended in 2011 and Gonio joined the Batumi Municipality) partially satisfied the demand for nullifying the 2010 decision of the Khelvachauri Commission. Specifically, the Commission’s decision stipulated that the 2010 decision would stay in effect in the following cases:  1. Licenses which were given in the area of physical protection of a cultural heritage monument – Gonio Castle, 2. Licenses which are subject to a fully active court decision and 3. Licenses which were given to lawful owners (actual users of the land). It should be pointed out that the Commission’s decision did not specify how many citizens were included in any of these categories. Hence, it is not clear how many of the 271 families saw their property rights restored with this decision.

interviewed a local citizen, Enver Iremadze, who possesses detailed information about the court cases involving citizens whose properties were seized in Gonio. According to his information, with the categories designated by the Property Rights Recognition Commission of Batumi City Council, no individual (or only a very few) would be able to have his property rights restored. The reason for this is that when the properties were given to the citizens in 2007, most of them were recognised as the lawful land owners. Mr Iremadze also told us that fully active court decisions, which denied the property rights, exist for many citizens making complaints. Hence, it was unclear for Mr Iremadze exactly whose property rights would be restored.

According to the statement of the Chairman of the Commission, Levan Kintsurashvili, each family must address the Public Register individually and register its property rights following the Commission’s decision. Gonio community members, Ruslan Diasamidze, Khemdi Memishishi and Lasha Beridze, did indeed address the Public Register. However, according to the National Agency of Public Register’s decision, their registration process was terminated. The Register’s decision explained that it was impossible to determine whether or not the property rights of any of these individuals had been restored as there were no individual decisions. The Public Register asked Batumi City Council to indicate the identities of the owners as well as their requisites.

When assessing the Commission’s decision, the Head of the Ajara Office of the Regional Department of the Public Defender of Georgia, Tsiala Katamidze, also focused upon the lack of an individual approach to the cases. According to her statement:  “It is a fact that property rights were not restored by this decision and it is necessary for the Commission to explain how individuals are to restore their property rights in specific cases.”

About 60 citizens complained about the decision of the Property Rights Recognition Commission of Batumi City Council to the court on 25 July 2016.

The land ownership licences of the Gonio community families were terminated in 2010. They have been trying to restore their property rights through various means ever since.

It is true that the Property Rights Recognition Commission of Batumi City Council rendered the 2010 decision partially nullified on 27 June 2016; however, citizens remain unable to restore their property rights by means of the Commission’s decision. Each family is now required to individually prove its land ownership. Court cases have once again reappeared and FactCheck

will be looking into them closely.

At this stage, however, FactCheck concludes that Lado Mgaloblishvili’s statement is FALSE.
თეგები: