“How is it that in the research conducted from 26 March to 18 April, the name of a candidate officially nominated on 4 April, by the beginning of the fieldwork, was not included at all?”

On 8 May 2014, while meeting with the electorate, Tbilisi mayoral candidate of the United

On 8 May 2014, while meeting with the electorate, Tbilisi mayoral candidate of the United Opposition coalition, Dimitri Lortkipanidze, criticised the research outcomes of the National Democratic Institute (NDI) and declared that the institution should be asked why his candidacy was not included within the scope of the research:  “How is it that in the research conducted from 26 March to 18 April, the name of a candidate officially nominated on 4 April, by the beginning of the fieldwork, was not included at all?”

took interest in Lortkipanidze’s statement and decided to investigate why his name was excluded from the research conducted by NDI.

The National Democratic Institute’s research was published on 8 May. It was funded by the Swedish International Development Cooperation Agency (SIDA) and aimed at studying the attitudes of Georgian society surrounding the upcoming elections.

The research consisted of several stages. The fieldwork for the final stage was conducted between the period of 26 March-18 April 2014. A total of 3,942 respondents were interviewed within its scope. The sample covered the Georgian-speaking population throughout the country including rural and urban areas in eastern and western Georgia. An additional representative sampling was conducted in 12 self-governing cities of Georgia:  Tbilisi, Kutaisi, Batumi, Poti, Rustavi, Gori, Akhaltsikhe, Ozurgeti, Ambrolauri, Zugdidi, Telavi and Mtskheta. The method of an individual interview was used. The average margin of error of the abovementioned research is +/- 2.1%.

According to the research findings the most preferred mayoral candidate is Davit Narmania (39%) followed by Nikoloz Melia (10%). 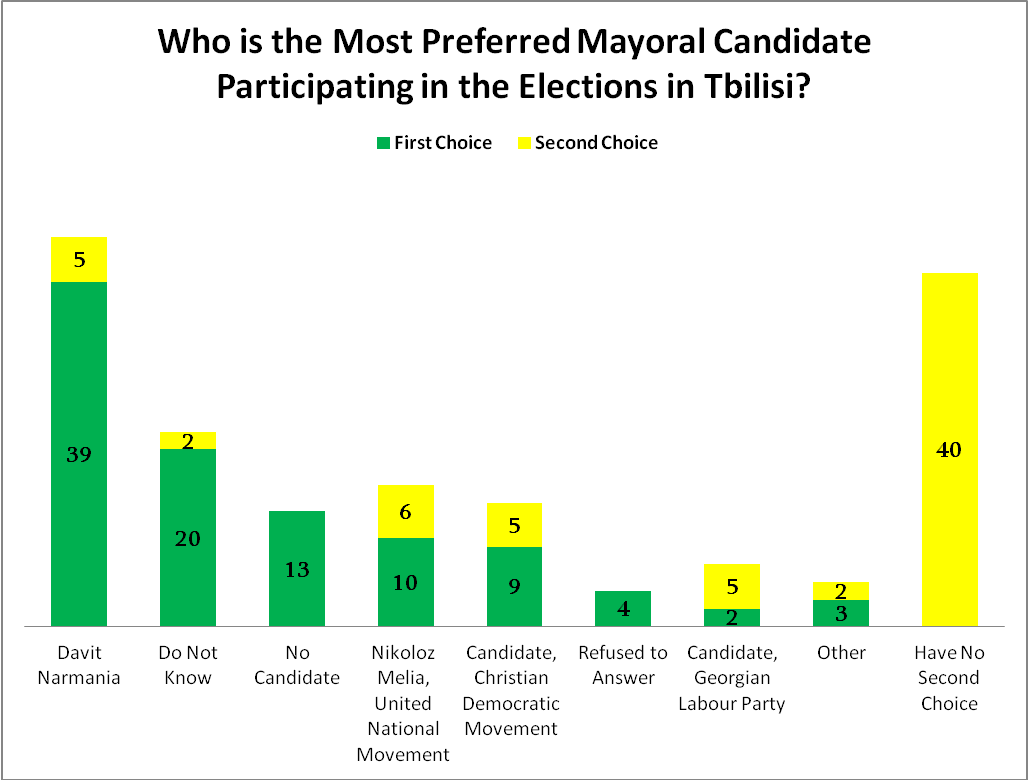 The public attitude towards Tbilisi mayoral candidates is as follows: 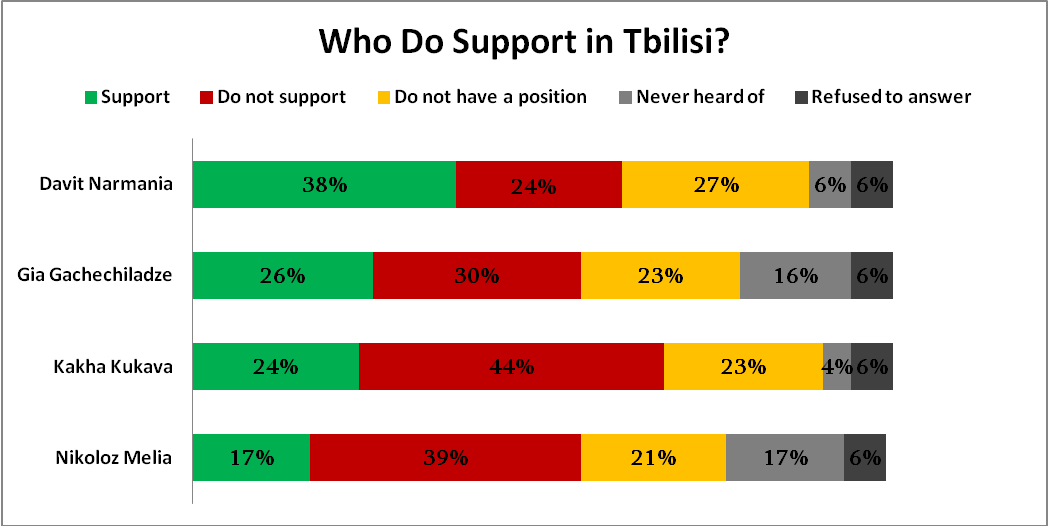 While researching the abovementioned issue, FactCheck did indeed not come across Dimitri Lortkipanidze’s name. In order to verify the reasons for excluding his candidacy in the section concerning Tbilisi mayoral candidates, FactCheck

got in touch with the National Democratic Institute. Based upon the information obtained from NDI, the fieldwork for the abovementioned study had begun nine days prior to Lortkipanidze’s nomination as a mayoral candidate (Lortkipanidze was nominated on 4 April while the fieldwork started on 26 March). Therefore, it was impossible to update any information in the research questionnaire. To the question about why the research started before all of the candidates had been announced, NDI responded that the dates for each research topic were strictly defined in advance. In addition, the aforementioned study aimed at identifying the public’s attitude towards different institutions and political leaders and not the ratings of the mayoral candidates. Therefore, the research could not be deterred or postponed because not all of the candidates had been identified by that time.

research showed that the National Democratic Institute’s (NDI) study that aimed at identifying the public’s attitudes towards various institutions and political leaders does not contain Dimitri Lortkipanidze’s name in the list of Tbilisi mayoral candidates. His candidacy was announced nine days after the fieldwork for the NDI study had begun and not at the beginning of the research as declared by Lortkipanidze. As a representative of NDI explained, the research dates and procedures were strictly set in advance which rendered it impossible to change the questionnaire and restart the research. Additionally, NDI’s research comprised a very general character and never aimed at discovering and presenting the ratings of Tbilisi’s mayoral candidates. Therefore, the research could not be postponed until such time when all of the mayoral candidates had been announced.

FactCheck concludes that Dimitri Lortkipanidze’s statement:  “How is it that in the research conducted from 26 March to 18 April, the name of a candidate officially nominated on 4 April, by the beginning of the fieldwork, was not included at all?,” is FALSE.