At the presidential debates held on 17 October 2013, presidential candidate Zurab Kharatishvili stated: “Me and my team offer voters a production-oriented economic policy which entails that the major state resources will be allocated to the development of production and the reduction of the foreign trade deficit which totalled 15 billion dollars over the last three years.”

took interest in the presidential candidate’s statement and checked its accuracy based upon the data provided by GeoStat.

The import replacement and the reinforcement of exporting fields is certainly worthwhile if it turns out to be advantageous for producers as well as consumers and, therefore, for the country as a whole. At any rate, as far as the economy goes, the price and quality of the import-replacing goods should at least be equivalent, if not superior, to the price and quality of the imported goods.

The figures describing the import, export and net export (export-import) of the country over the last three years are presented in the table below. A negative indicator of the net export is known as a foreign trade deficit while a positive figure is described as a trade surplus. 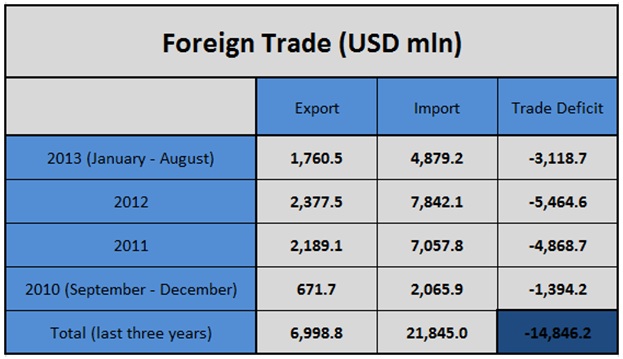 In total, the foreign trade deficit of the last three years amounted to almost USD 15 billion. However, these are mere numbers and inadequate for the description of the trade deficit which is a flow variable (similar to GDP, budget deficit and surplus, import and export of goods and services) and not a stock variable (as, for instance, state debt). It is more advisable to analyse the foreign trade deficit in time dynamics instead of summing up the numbers for different years as the summation of flow variables gives nothing but the mere numbers. For instance, the summation of the GDP indicators of the last three years produces a certain figure which conveys nothing at all about the GDP growth and growth rates throughout those years. Examining the trade deficit within time dynamics, however, provides means for analysing to what extent the given indicator has improved (decreased) over the last years.

The replacement of imported goods with those of local production and the subsequent minimisation of the trade deficit is certainly more than advisable but the role of the government, in the case if it is oriented on the market economy, is minimal in this process. Therefore, the market (entrepreneurs) itself should be given the role of establishing and bolstering local production.

Conclusion The foreign trade deficit of the last three years indeed totalled USD 15 billion but it is still to be noted that the summation of flow variables is not economically viable as it conveys no means for economic analysis but mere numbers. Bearing in mind the results of our research we conclude that Zurab Kharatishvili’s statement: “Me and my team offer voters a production-oriented economic policy which entails that the major state resources will be allocated to the development of production and the reduction of the foreign trade deficit which totalled 15 billion dollars over the last three years,” is TRUE.-Archil Rostomashvili