“Rustavi is an industrial town and in the aftermath of the October [Parliamentary] elections the state of employment is only worsening.”

On 13 September 2013, presidential candidate Zurab Kharatishvili met with members of the Rustavi

On 13 September 2013, presidential candidate Zurab Kharatishvili met with members of the Rustavi population and presented them the chief priorities of his presidential programme. Kharatishvilitook special note of employment issues and stated: “Rustavi is an industrial town and in the aftermath of the October [Parliamentary] elections the state of employment is only worsening.”

We took interest in the given matter and tried to examine whether or not the rates of employment in Rustavi had indeed seen a decrease after October 2012.

At the outset we addressed the National Statistics Office of Georgia with an official letter in which we requested information on the number of employed in the period from October 2012 until present (September 2013).

In order to calculate similar indicators for previous years, we used the percentage given above and based upon the statistical data on Lower Kartli tried to establish what the numbers of people employed in Rustavi’s business sector would look like if the percentage remained unchanged.

Using the data of GeoStat on relevant quarters and applying to it the correlation (53%) established by us, we set out to determine the number of employed in the business sector of Rustavi. 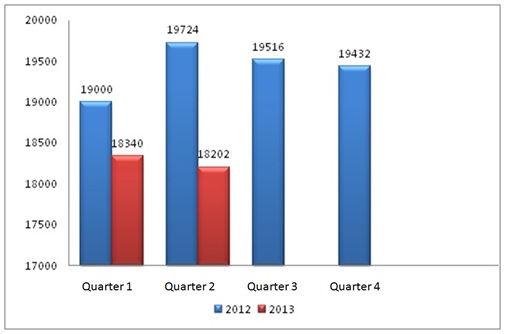 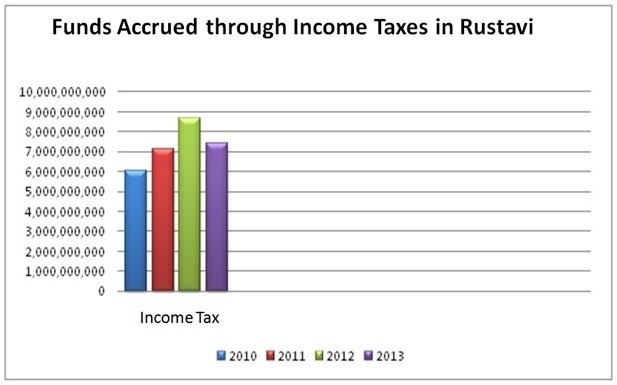 As gathered from the graph, up until 2012 the funds from income taxes were seeing an increase whereas in the years 2012-2013 the sums accrued through income taxes started shrinking. The observed decrease could be prompted by a fall in the number of employed and the related drop in the amount of salaries as well as by a decrease in the collection of taxes. Therefore, the indicated data is not sufficient for verifying the alleged drop in the number of employed but provides certain information with regard to the existing state of affairs on the labour market of Rustavi.

The acquired results demonstrate that the number of people employed in the business sector of Rustavi in the first and second quarters of 2013 is lower than that of 2012.

Aiming to prop up our research we also analysed the funds accrued throughout the last four years through the income taxes in Rustavi. The volume of income taxes collected in 2012-2013 is smaller than the volume for the similar periods of the previous years. It is to be noted, however, that this circumstance does not constitute an undisputable verification for a drop in the number of employed.

Considering the circumstances revealed by our research we can assert with a high probability that Zurab Kharatishvili’s statement: “Rustavi is an industrial town and in the aftermath of the October [Parliamentary] elections the state of employment is only worsening,” is TRUE.-Veriko Sukhiashvili