“Everyone knows that agreements have been signed according to which parents are obliged to pay a fine or reimburse the total cost of a [school] textbook even in the case of some minor scuffing or a missing page.”

Visiting a socially unprotected family, Giorgi Targamadze, Leader of the Christian-Democratic party and presidential candidate, congratulated school students on the start of the new academic year. Targamadze touched on the matter of the certain obligations imposed on the use of the free-of-charge school textbooks being distributed to students. He noted that he has received requests from many parents asking him to bring the problems related to these obligations to the government’s attention. According to him: “Everyone knows that agreements have been signed according to which parents are obliged to pay a fine or reimburse the total cost of a [school] textbook even in the case of some minor scuffing or a missing page.” He also stated that this had been an absolutely unmindful decision which keeps students as well as their parents under stress and tension throughout the whole year.

set out to study the matter of the agreements formed between the schools and the parents.

On 8 April 2013, Giorgi Margvelashvili, then Minister of Education and Science, voiced the information regarding the fact that starting from the beginning of the 2013-2014 academic year, free-of-charge school textbooks would be distributed to all students of public schools. As the new academic year started, information became available that some problems had arisen with regard to the distribution of the textbooks with a particular problem being the obligation put on parents to reimburse any damage to the textbook.

Intending to explore the details of the matter we addressed the Ministry of Education and Science of Georgia. The Ministry’s Press Office informed us that a certain kind of agreement is indeed signed between the parent and the school in the form of an act of receipt and delivery upon the receiving of a school textbook by the student. This act regulates all the conditions, rights and responsibilities between the school and the parent. As explained by the Ministry, the only purpose of the agreement is to develop in students the skill for taking care of the textbook and preserving its condition for use in the next academic year. Students should be familiar with the culture of treating a textbook correctly and the obligation of reimbursing the damage is aimed precisely at this objective. The Press Office also noted that the custom of forming agreements was not new and had been practiced for years. These kinds of agreements were being signed earlier as well when free-of-charge textbooks were distributed solely to students who were granted certain social privileges by the government (socially unprotected families, those with many children, also children of military personnel who died in war). As for the reimbursement of the damage, parents face this obligation only in the case of the student not meeting the required criteria for the condition of the book and if the book has been deliberately and/or completely ruined (verified by the act of receipt and delivery) and not “in the case of minor scuffing or a missing page” as indicated by the presidential candidate.

The details of the utilisation and treatment of free-of-charge school textbooks are regulated by Ordinance #103/n of Tamar Sanikidze, the Minister of Education and Science of Georgia, issued on 5 August 2013. Based on this very Ordinance, agreements were prepared to reflect the main postulates of the Ordinance and clarify the rights and responsibilities between the school and the students. The Ordinance aims to ensure a rational implementation of state material resources by means of protecting state property. Article 3 of the Ordinance defines the criteria for evaluating how the textbook has been treated and gives a 15-point scale for this evaluation. The evaluation criteria of the textbook’s treatment are as follows: 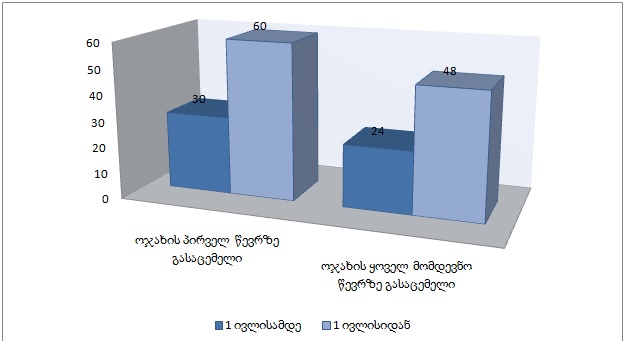 According to the Ordinance, students should be given a textbook evaluated at no lower than nine points. The textbook is unsuitable for utilisation if its evaluation on the scale shown above is equal to or lower than eight.

The Ordinance also defines that passing down a textbook to a third party by the student or any other individual is unacceptable. Furthermore, the student is compelled:  to use the textbook solely for educational purposes, preserve the integrity of the textbook, take care of the textbook, avoid any damage such as folding pages or making notes within and so forth. It is also obligatory to examine the textbook upon receiving it from the school and, in case of defects being discovered, the relevant public school should be notified. Otherwise, the responsibility for the damaged textbook will be upon the student’s parent/guardian (Article 4 Paragraph 3).

It is also to be noted that upon the expiration date of the agreement (i.e., the end of the school year), in the case of a student being transferred to a different school in accordance with the regulations prescribed by the law or in the case of a student status being terminated, the textbooks should be returned to the school in the condition evaluated to be no more than three points lower (this suggests the evaluation on separate scales from the abovementioned categories of ‘condition of the cover,’ ‘cleanliness of the textbook,’ ‘condition of the textbook pages;’ see the chart above).

The responsibility of the parent/guardian is defined in the case of the obligations described in Paragraph 3 of Article 4 not being met as well as the textbook being damaged or destroyed. If such an occurrence exists, the parent/guardian is required to replace the textbook with one of identical content and edition. If these obligations are not fulfilled the parent/legal guardian is denied the right of forming an agreement for the purpose of attaining textbooks in the next school year. It is noteworthy that the agreement discusses only the total reimbursement of the damage (replacement of the textbook with one of identical content and edition) and not any other kind of fine as mentioned by the presidential candidate.

In the course of our inquiry it was established that an agreement is indeed formed between a school and a parent/legal guardian upon the issuance of free-of-charge textbooks to the students and this procedure is regulated based upon the Ordinance #103/n issued on 5 August 2013 by the Ministry of Education and Science of Georgia. This Ordinance lists all criteria and relevant points which evaluate the suitability of the textbook being reused by the school in the upcoming academic year. If at the end of the school year upon returning the textbooks the condition of a textbook is evaluated to be lower than nine on the grading scale a parent/legal guardian becomes responsible for replacing the damaged textbook with one of identical content and edition.

It is of importance to point out, however, that Giorgi Targamadze claims that the parents face such responsibility “even in the case of minor scuffing” which is proven to be incorrect. His statement with regard to fines for damages was also unable to be verified. It should be noted as well that the textbook condition criteria are rather ambiguous as they do not create a clear picture of what can be qualified as a serious, medium or insignificant example of damage to the textbook and, therefore, leaves some room for certain interpretations.

As for the negative pathos with regard to the practice of agreements noticeable in Giorgi Targamadze’s statement, the agreements were signed in the past years as well when free-of-charge textbooks were distributed to socially unprotected families or those with many children and also to children of military personnel.

Notwithstanding the fact that it is not the responsibility of FactCheck

or the purpose of its research to evaluate the state policy of distributing free-of-charge textbooks to school students, we would still like to direct the reader’s attention to one specific circumstance. If we assume that students return the textbooks to the school in the condition corresponding to a point 9 on the grading scale, there is a high probability that in the next year the textbooks will not be returned to the school in the same condition and, therefore, will be unsuitable for utilisation in the following year. The analysis of the Ordinance and the agreement does not reveal what the state’s actions would be in this case and if the parent/guardian would still be responsible for reimbursing the cost of the textbook or if the state would replace the textbook at its own expense. We were also unable to receive an adequate and comprehensive answer to this question from the Ministry of Education and Science.

FactCheck concludes that Giorgi Targamadze’s statement:  “Everyone knows that agreements have been signed according to which parents are obliged to pay a fine or reimburse the total cost of a [school] textbook even in the case of some minor scuffing or a missing page” is HALF TRUE.