On 18 September 2013, presidential candidate Davit Bakradze declared in an interview with Tabula

magazine:  “We are the political party whose governance in its nine years made a tenfold increase in the budget, a 7-8% growth in the national economy and a reduction of taxes. We can bring all these back to this country. ..  We didn’t manage to solve the major social issues such as unemployment, for instance, but we did achieve a threefold increase of the Gross National Product and a tenfold increase of pensions.”

found the presidential candidate’s statement to be of interest and checked its accuracy based on the information provided by the National Statistics Office and the Ministry of Finance. 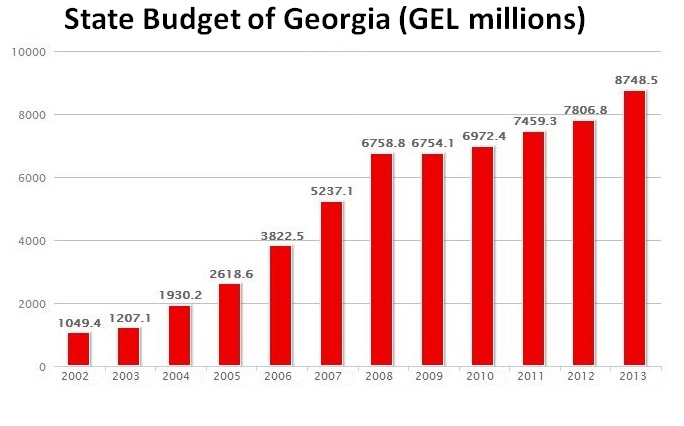 If the presidential candidate was referring to budgetary revenues when mentioning the growth of the budget, this indicator does not see a tenfold increase in 2012 as compared to the year 2004. As shown in the chart below, state budget revenues of Georgia amounted to GEL 933.3 million while in 2012 state budget revenues stood at a little over 7 billion which is roughly 7.5 times more than in 2003. 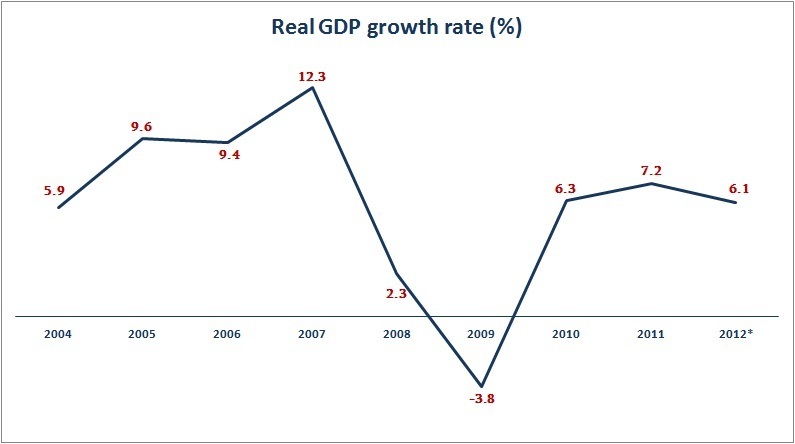 Following the reforms implemented in the taxation system of Georgia in 2005, the majority of taxes have been abolished. Prior to 2005, there were 21 types of taxes while today they have been cut down to six.

The social tax was eliminated starting from 2008 and a single income tax was introduced instead which was set at 25% and later in 2009 reduced to 20%. Tax rate on dividends and interests is at 5% instead of the 10% present in 2005.

Also instead of 16 different types of import tariffs, only three import tariffs are being enforced presently (0%, 5% and 12%). Apart from this, no restrictions are set (quotas) on the amount of imported and exported goods.

According to the report Paying Taxes 2013,

Georgia is distinguished in Eastern Europe and Central Asia by its low tax rates. The total tax rate in Georgia amounts to 16.5% while an average figure in the region stands at 41.3%. Georgia occupies the third position in terms of lowest tax rates. It is surpassed by Kosovo in second place, with a 15.4% tax rate, and Macedonia, with 9.4%, occupying first place.

GeoStat does not calculate Gross National Product (GNP – market price of the total amount of goods produced by the country residents) but calculates Gross National Income (GNI – the sum of the primary and real estate incomes of the state residents received from the state economic territory or from any other territory of the world) instead. Normally, the difference between the indicators of GNP and GNI is very insignificant and at present the World Bank uses GNI, and not GNP, along with GDP figures for determining the rate of economic growth. The table below shows GNI figures for the last ten years. If we compare the figure from 2012 to the figure in 2003 (GNI prior to the UNM’s coming into power), a threefold increase can be observed. Accordingly, we can assume that Gross National Product has also seen a threefold growth.

Prior to the UNM’s coming into the government (2004) the pension amounted to GEL 14 while in 2012 its amount was GEL 120. Thus, pensions have become 8.5 times bigger. The table below shows the size of pensions over the past 13 years.

It was ascertained through our inquiry that:

Notwithstanding the fact that some of the figures indicated by the presidential candidate are inaccurate, they are still quite close to the real figures. Consequently, we conclude that the presidential candidate’s statement:  “We are the political party whose governance made a tenfold increase in the budget, a 7-8% growth in the national economy and a reduction of taxes. We can bring all these back to this country. ..  We didn’t manage to solve the major social issues such as unemployment, for instance, but we did achieve a threefold increase of the Gross National Product and a tenfold increase of pensions,” is MOSTLY TRUE.