“The number of employed people has gone down from 525,000 to 480,000, precisely this many people have been left unemployed in the period between October and April… This information disappeared from the website of the statistics department.”

On 16 September, in the interview to the newspaper Prime-Time, presidential candidate Zurab

On 16 September, in the interview to the newspaper Prime-Time, presidential candidate Zurab Kharatishvili stated: “The number of employed people has gone down by 9 percent, from 525,000 to 480,000, precisely this many people have been left unemployed in the period between October and April. It means that every eighteenth person has lost a job. This information disappeared from the website of the statistics department.”

set out to check the accuracy of the statement.

We contacted Zurab Kharatishvili and asked him to ascertain to which data of GeoStat he was referring in particular. The candidate didn’t remember exactly in which research he had found this information. He noted, however, that the data mentioned by him had been published in June and had caused a severe debate between the government and the opposition. According to him, he wished to see these statistics afterwards, but couldn’t find them on the website.

We can make an undisputable assumption that Zurab Kharatishvili was referring to the statistical data on business sector published by the National Statistics Office of Georgia on 4 June of the current year (no other data on employment was published in June), according to which, in the fourth quarter of 2012 the number of employees in the business sector amounted to 527,800, while in the first quarter of 2013 the number was at 485,700 (the presidential candidate did not indicate these numbers accurately either). It is to be added herewith, that this information has not “disappeared” from the website of the National Statics Office of Georgia and is available to any interested individual. (See link) As noted above, on 4 June 2013, the National Statistics Office of Georgia published statistical data

examined the matter thoroughly by studying European and American sources and found that a comparison of the first and fourth quarters is possible only in the case of making seasonal adjustments to the data. It is to be noted that GeoStat has no methodology of seasonal adjustment worked out and so only parallel quarters of different years can be compared to each other which renders impossible a comparison of any other quarters. Weighing the first quarters of 2012 and 2013 against each other, we see that the number of people employed in the business sector has not dropped but increased by 15,700 (The first Quarter of 2012 – 470,000 employees; the first quarter of 2013 - 485,700 employees). 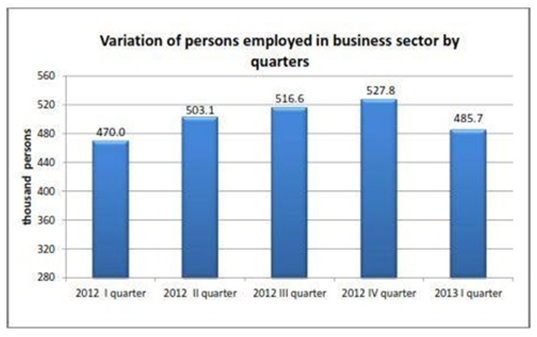 In the course of verifying Zurab haratishvili’s statement we found that the number of people employed in the business sector in the first quarter of 2013 dropped by 42,100 as compared to the fourth quarter of 2012. Our research revealed, however, that the comparison of the first and fourth quarters gives inaccurate results if the data is not seasonally adjusted (GeoStat has no methodology of seasonal adjustment). This comparison is evermore unreliable as the comparison of the parallel quarters reveals an increase in the number of employment.

Considering the circumstances uncovered by our research, we can say that the presidential candidate’s statement is inaccurate. It should also be noted, however, that we cannot positively assert that the decrease of employment by 42,100 was related solely to seasonal specifications and no long-term job cuts have taken place, as statistical data does not provide a solid foundation for such an assertion. Naturally, seasonal decrease in employment has taken place, but we cannot discard the possibility of a real decrease of employment. This possibility gains in strength due to various economic conditions. Real GDP growth rate in the first quarter of 2013 was 2.4% whereas in the same period of the last year the same indicator was at 6.7%. A drastic decline in the GDP growth rate is apparent. Apart from this, a decrease

was registered in the turnover growth rate of VAT paying companies. In all likelihood, the economic circumstances described above would have relevant effects upon the employment rates in the business sector.

In conclusion we would like to note that FactCheck has previously checked an analogical statement of United National Movement presidential candidate – Davit Bakradze and considering the economic circumstances described in the previous paragraph, rated that statement as mostly false. If not for one factor we would have rated Zurab Kharatishvili’s statement with the same gradation, but the statement of the former head of the Central Election Commission includes a greater inaccuracy, as he claims that GeoStat conceals the information, which is not true. Precisely for this reason we conclude that Zurab Kharatishvili’s statement, “The number of employed people has gone down from 525,000 to 480,000, precisely this many people have been left unemployed in the period between October and April… This information disappeared from the website of the statistics department,” is FALSE.