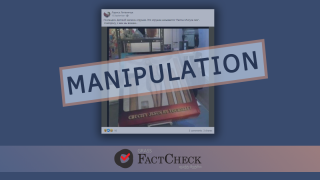 Disinformation: ‘Crucify Jesus Yourself!’ toy is sold at a Dutch toy store

Facebook users are disseminating disinformation about the artwork of a Dutch artist (link 1, link 2, link 3, link 4, link 5, link 6). They claim that a toy crucifix, called “Crucify Jesus Yourself!” is sold at one of the children’s toy stores in the Netherlands. Facebook users have made almost identical publications with one of them writing: “Friends, something is happening in the world and this what we cannot see beyond the news and behind the curtains. Dutch toy stores sell a toy called ‘Crucify Jesus Yourself!’” The photograph in social networks shows that the figure of Jesus, nails and a gavel are in the box. The same claim is promoted by the Facebook user Bneli Ubnelesi (Dark the Darkest) which published footage clipped from the sermon of Alexander Lipin, a priest of the Russian Orthodox Church abroad. Of note is that the footage was disseminated in social networks as early as 2019 and it was published from Lipin’s YouTube channel which has since been removed due to a violation of YouTube’s rules of service. Of further mention is that the photograph and the respective claim has been promoted by different Facebook users in the past as well (link 1, link 2, link 3). 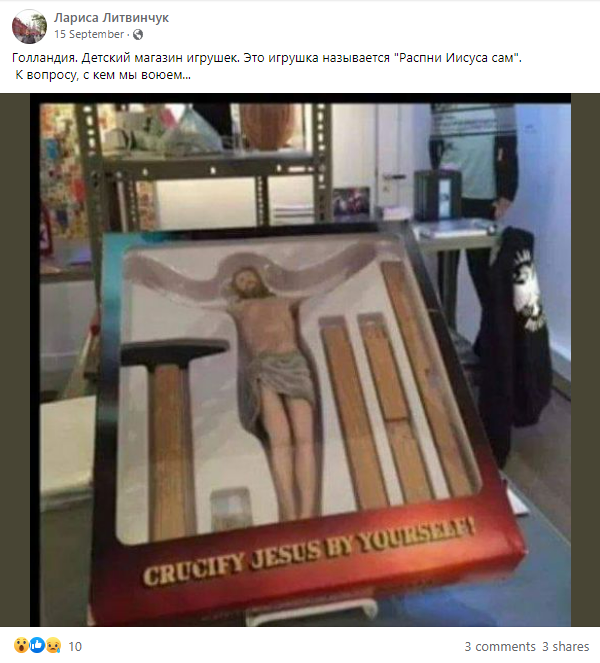 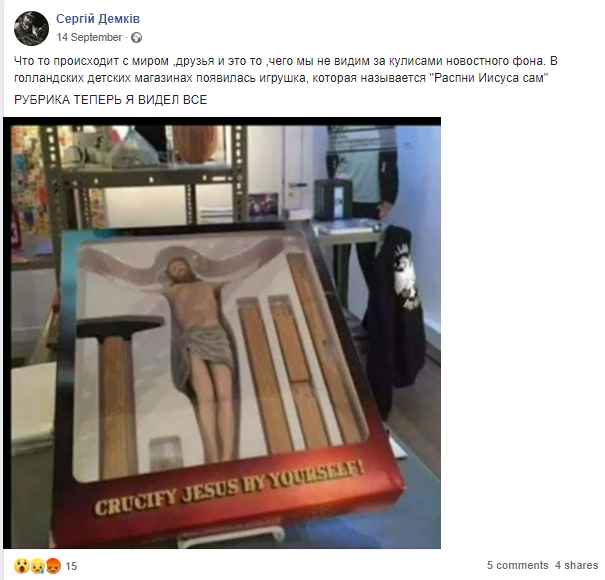 In reality, the photograph depicts not a child’s toy but a piece of artwork, entitled as “CRUCIFY JESUS YOURSELF,” authored by the Dutch artist, Filemon Wesselink. This piece of artwork was exhibited in 2015 at the Twente Biennial modern art festival held in the Dutch city of Enschede and was published on the festival’s Facebook page as well. 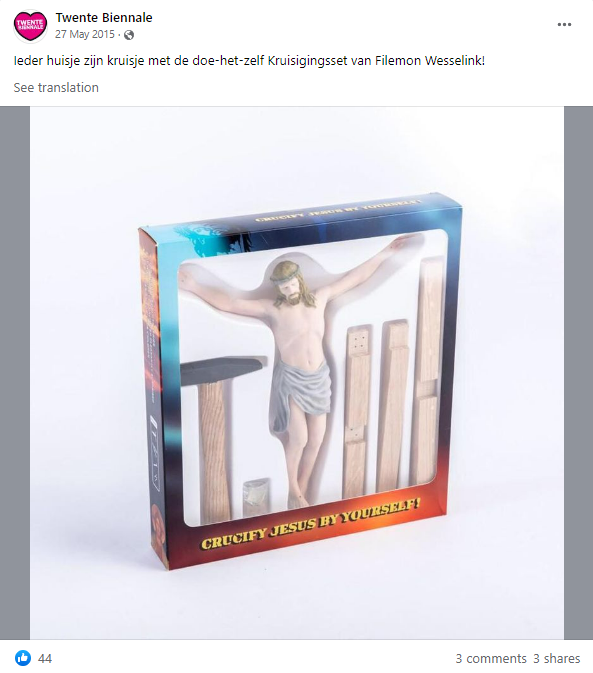 Of note is that Mr Wesselink’s artwork was for sale at the Dutch Art Kitchen Gallery for the price of EUR 525. However, the artwork was sold is currently unavailable on the website.

Therefore, the claim disseminated in social networks is fake and the photograph depicts a piece of artwork created by the Dutch artist, Filemon Wesselink, and is not a toy. This piece of artwork has nothing to do with toys and it was sold in a Dutch gallery – Art Kitchen Gallery, and not in a toy store.