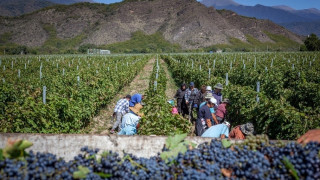 Subsidising – Does it really help to develop the field or is it a social act?

It was reported a while ago that the Government of Georgia will subsidise the grape harvest this year as well. According to the statement of the Prime Minister of Irakli Gharibashvili, the government decided to subsidise the grape harvest in light of the current challenges. At the session of the government, the Prime Minister said that subsidies for the 2022 grapes will amount to GEL 150 million in total.

According to the National Wine Agency of Georgia, red grapes will be sold on the free market this year whilst GEL 0.35 will be added as a subsidy to the price of white grapes if a farmer is paid less than GEL 0.9 per one kilogram as was also the case last year.

Georgia has been subsidising grape prices since 2008 when Russia imposed a trade ban on Georgian wine. Since the Russian Federation was the main export market for Georgian wine at that time, the trade ban inflicted huge social and economic damage to the Georgian wine industry. In order to alleviate these damages, there was a need to subsidise grape prices in order eradicate the negative consequences of the ban and keep grape farming profitable. In 2008-2012, the grape subsidy programme was miniscule. In particular, it cost GEL 0.15 for the Georgian budget to subsidise one kilogram of Rkatsiteli grapes, GEL 0.25 for one kilogram of Saperavi grapes and GEL 1 for one kilogram of Mujuretuli/Aleksandrouli grapes. In those years, GEL 6-7 million was allocated from the budget for the annual grape harvest.

The situation has changed since 2013 when the GEL 1 subsidy allocated for Mujuretuli/Aleksandrouli grapes remained the same but subsidies for Rkatsiteli and Saperavi grapes increased to GEL 0.4 and 0.35, respectively, with the arrival of the new government. As a result, total budget allocations increased significantly and reached GEL 32 million in 2013.

The subsidy structure was altered drastically in 2017, implying that the government ceased subsidising grape prices, although it allocated money to state-owned companies to purchase excess grapes on the market. The subsidies were kept only for the Aleksandrouli and Mujuretuli varieties (GEL 2 per one kilogram of grapes). As mentioned earlier, compensation was given to those wine companies which purchased one kilogram of grapes (Rkatsiteli and Kakheti green) to produce brand spirit and concentrated grape sweet juice for at least GEL 0.7 per kilogram. The amount of subsidy per one kilogram of grapes was GEL 0.35.

In 2018-2019, the government did not subsidise grape prices, although it allocated GEL 10 million to the state-owned Akura enterprise in both years which was, in fact, an indirect subsidy vis-à-vis the grape harvest. The GEL 10 million allocated in 2019 was not sufficient and the total accumulated money to purchase excess grapes reached GEL 80 million.

In 2020, given the coronavirus pandemic, the Government of Georgia again decided to subsidise grape prices. GEL 40 million was allocated from the state budget to this end. In addition, extra funds were allocated to purchase excess grapes on the market and subsidies amounted to GEL 87.1 million in total. That year, the government purchased 95,000 tonnes of grapes.

In 2021, GEL 138 million was allocated for grape subsidies. The bulk of this allocation was transferred to the state-owned Harvest Management company LLC (GEL 107 million). In exchange for this money, the company was supposed purchase both good and hail-damaged grape and process the harvest.

As mentioned earlier, this year the government decided to allocate GEL 150 million for grape subsidies (white grape price will be subsidised as well as the purchase of excess grapes on the market).

The total amount of money spent on grape subsidies since 2008 is as follows: 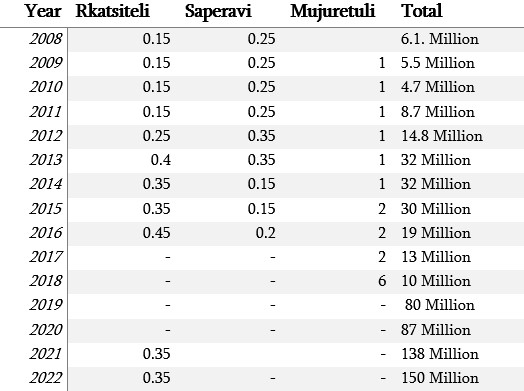 Generally, subsidising is a well-tested method across the world and in fact it should be used to save the industry, develop it and attract investments. However, the situation in Georgia is different. At the first stage of the subsidies when Georgian wine lost its major export market due to the Russian trade ban, the subsidies were justified but then this became something different from 2018.

In the past few years, grape price subsidies are more like social assistance instead of the facilitation of the development of the industry and negatively affects the sector. Under the market economy, product prices are determined by the balance between demand and supply. Some Georgian farmers, getting used to subsidies, remain dissatisfied by the grape price every year because of the generous promises made by politicians and the policy of subsidisation which gives constantly exaggerated expectations among the grape farmers. In addition, being hopeful that the government will still purchase excess and low-quality grapes, some farmers take little care about their product’s quality. Of additional not is that grape subsidies put the wine industry into an advantageous position and makes it more attractive. Therefore, farmers are often inclined to plant vineyards which in turn result in surplus production.

Of further mention is that subsidies are often disbursed to large companies having close ties with the ruling party which puts smaller wine makers into an uncompetitive position.

Given the growing grape production in the past few years, as well as growth trends in wine export, it is desirable that the government cease the subsidisation of grapes and allow the industry to develop independently. At the same time, the money spent for subsidies can be used for the diversification of markets for Georgian wine and its growing popularisation which would be a more rational and appropriate use of taxpayer money.