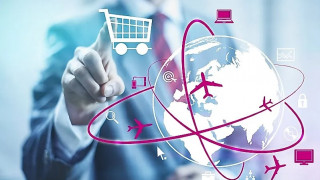 Dynamic of Trade in Services

Generally, the term export is used interchangeably with the export of goods, although trade in services is a no less important component of foreign trade. Trade in services is any service which a resident of one country provides to people in other companies. International trade in services implies making such transactions between residents and non-residents of a country which are not related with the physical movement of goods across borders and is otherwise called “invisible” trade.

Trade in services plays an important role in both the economies of highly developed and developing countries and is particularly vital for a developing country like Georgia. The export of services creates high-paying jobs and provides and an opportunity to enter new and developed markets where there is less possibility for trade in goods, it allows for the diversification of the economy and it is often associated with high added-value business (for instance: information technologies, financial services, consulting, tourism, etc.) which is positively reflected on a population’s well-being. Therefore, it would only be fair to conclude that this field warrants much more attention than it currently attracts.

The National Bank of Georgia publishes statistics of trade in services according to trade fields. Trade in services is an important component of the current account and, therefore, the balance of payments contain information [1] about it. In 2021, the export of services amounted to USD 2.5 (13.6% of GDP) billion whilst import was 1.8 billion. Eventually, the trade surplus constituted USD 726 million. Of note is that trade in services decreased considerably as opposed to trade in goods as compared to the pre-pandemic period. In 2019, the total value of the export of services was USD 4.5 billion (26.3% of GDP) and import was 2.4 billion whilst the balance was amounted to USD 2.1 billion.

As expected, Georgia earns its biggest revenues from travel in terms of services. In 2021, the net income from travel amounted to USD 1 billion whilst it was USD 2.6 billion in 2019. Therefore, tourism is an important segment of the current account and a source of foreign currency inflow. In 2021, Georgia earned USD 120 million net in revenues from telecommunications, computers and information services which is a four-fold growth as compared to the pre-pandemic period. Of note is that the net income is higher in pipeline and electric transmission line services with income amounting to nearly USD 350 million in the past few years.

The National Statistics Office of Georgia has started to publish information about partner countries in terms of trade in services. According to the Office, the production of statistics on international trade in services was one of the sub-components of the EU-funded Twinning Project - Strengthening the Capacity of the Georgian Statistical System (2019 – 2021). Previously, this information was not publicly available on the website of the National Statistics Office of Georgia and was, therefore, left without attention. Currently, data for 2020-2021 have been published. Given the pandemic crisis, it is assumed that the conjuncture of trade in services is different under “normal” circumstances and, therefore, a discussion on the statistics for 2020-2021 may not depict the full picture. In 2021, Turkey accounted for the bulk of Georgia’s export of services (USD 240 million), Ukraine accounted for USD 206 million and Russia for USD 189 million. These four countries accounted for 40% of Georgia’s total exports of services. Of the EU member states, Germany is the biggest customer buying services from Georgia (USD 81 million). In total, EU member states and CIS countries purchased services in the value of USD 423 million and 920 million, respectively.