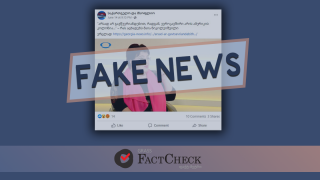 Disinformation: “The EU is a Colony of the USA.”

Maia Nikoleishvili, a forensic medical expert, made the following statement in her interview with the Georgian Times: “I deeply believe we are not going to obtain membership anywhere because the EU is America’s colony. I am confident that the EU is going to have its last autumn. Candidacy is absolutely nothing and we should take care of ourselves. We live in the Caucasus, we have neighbours, such as Azerbaijanis, Armenians, Russians, Chechens, North Caucasians, Turks. Let’s take a look at reality and exit Facebook. We are neither in Italy nor in Spain or Germany. We are here, in Georgia, and we have to look around, see our tomorrow to somehow avoid war and gain the good from where we are.”

This statement was published by Alia and the pro-Kremlin News Front as well as was widely shared in social networks (for instance, see Georgia and the World, link 1, link 2, link 3, link 4, link 5, link 6). According to Crowdtangle, social media’s analytical tool, this information garnered over 1,000 reacts in total across Facebook.

The aforementioned claim that the EU is a colony of the USA is a conspiracy theory and an item of fake news. First, a colony should be defined as a “country occupied and exploited by another country or a country which has lost state independence or sovereignty (Public Servant’s Dictionary/UN Development Programme). A colony should either be occupied by another country or a more powerful (and often far away) country should have full or partial political control. Of note is that in the modern globalised world, governments are unable to fully control the processes (for instance, the ongoing economic processes in the world affect all countries and none of the governments is capable of completely stopping it) and in this context, the sovereign power of the states has been reduced whilst none of the governments has absolute sovereignty over public, political and economic processes. In addition, government decisions are shaped by many external factors and they often have to take other countries’ positions into account. This constitutes the political influence of other countries over one country’s decisions. However, political influence is not inevitably considered as political control.

The EU, whose member states have voluntarily delegated part of their sovereignty to more efficient governance, is a close ally of the USA and, naturally, they take each other’s positions into consideration when making decisions. For instance, they are/were involved in a dialogue about the imposition of sanctions. Naturally, this level of interaction has nothing to do with colonial control.

The test which we can apply to understand whether or not EU-US relations are in fact a relation between a colony and a metropolis is to identify and scrutinise facts from the history of their relations when the EU took a stance opposite to the USA in important matters. If they are allies and take each other’s interests into account whilst there are some cases when the EU acted against the USA, this would be proof that Maia Nikoleishvili’s claim is a lie and the EU is not a colony of the USA. However, talks about colonial dependency would have had ground if the EU had fulfilled basically every demand from the USA whilst the USA had ignored all of the EU’s interests which would have been a potential indicator that there is no equality in the relations between the parties.

The history of EU-US relations indicates that there are partner relations between Brussels and Washington and nothing like a colony-metropolis type dependency, although the parties have had contradicting positions on a number of issues. EU-USA relations were formalised with the adoption of the Transatlantic Declaration where fields of cooperation consisted of the economy, education, culture, science, terrorism, the fight against international crime and trafficking, environmental protection, etc. In 1995, the New Transatlantic Agenda was adopted which comprises promoting peace, stability, democracy and development worldwide, joint response to global challenges, expansion of world trade and close economic ties, deepening of Atlantic connections, etc. To prove the existence of the close partnership between the EU and the USA, it would suffice to mention the fact that they have the largest bilateral trade and investment cooperation (detailed statistics available in official data released by the EU and the USA). On top of the economy, the parties are the closest allies in the political and the military dimensions as well, since most EU member states also hold NATO membership similar with the USA (the EU and NATO, as organisations, also have close relations).

Despite being allies and close partners, there are many disputes between the USA and the EU which prove that the EU is not a colony of the USA. For instance, one of the biggest controversies is about the dispute between the Boeing (USA) and the Airbus aircraft manufacturers. The parties sharply criticise each other on the grounds of Boeing and Airbus receiving subsidies from the USA and the EU, respectively, that contravened healthy competition. Of note is that within the scope of the Boeing-Airbus dispute on subsidies, the parties also imposed tariffs on each other for certain products. The leaders of the USA and the EU achieved a trade dispute settlement only after 17 years, in 2021, and the agreement envisions that the parties have to lift the tariffs on goods and services valued at USD 11.5 billion.

The Kyoto Protocol, intended to fight against global warming, is also a matter of controversy since the EU actively advocates the protocol whilst the USA has left it.

In addition, despite the USA’s demands, the EU and its leading member state, Germany, repeatedly refused to halt the Nord Stream 2 project which would have delivered Russian gas to Germany bypassing Ukraine. The USA also used sanctions to hinder the projects. However, US President Biden and the then German Chancellor Angela Merkel reached an agreement in 2021 and the USA had to withdraw its opposition. Eventually, the project was stopped, although Germany made this decision after Russia’s unprovoked and unjustified invasion of Ukraine.

EU-USA relations became tense when President Donald Trump was in office (for instance, because of the US leaving the Paris Climate Treaty) and President Biden sought to mend fences. However, during Biden’s presidency, the USA and the EU also had matters of controversy such as the chaotic US withdrawal from Afghanistan which left Europe discontent over US unilateral decision-making. The USA, the UK and Australia launching the AUKUS trilateral security pact was also a matter of controversy with the USA for the EU, particularly for France.

Given all of the aforementioned, the close alliance and the partner relations between the USA and the EU, on the one hand, and the number of controversial issues between the parties, on the other hand, indicate that US-EU relations are not relations between a metropolis and a colony but instead there is a dynamic characteristic of equal partners. Therefore, Maia Nikoleishvili’s claim that the EU is a colony of the USA is fake news and a conspiracy theory which lack factual ground.