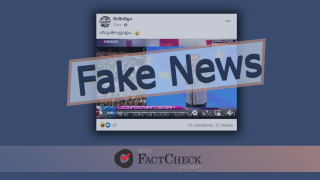 In fact, the full recording of the 20 June 2022 protest rally, in particular at 2:13:08, clear shows that the protesters replied affirmatively with a “Yes” in response to his question of “Will you come after the verdict is announced?” The people did not respond negatively. In the aforementioned piece of footage, cheers from the protesters and their “Yes” is audible.

Therefore, the piece of footage has been doctored in such a way as to drastically alter the situation and mislead the public.

Therefore, FactCheck concludes that piece of footage published on the Mishing Facebook page distorts Lasha Bughadze’s statement, is subject to video editing and is, therefore, fake.