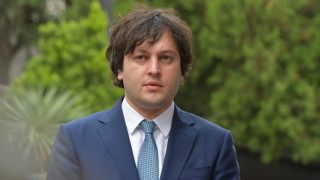 Eka Gigauri called on the public to invade Tskhinvali

On 14 June 2022, on air on TV Palitranews, Chairperson of the Georgian Dream, Irakli Kobakhidze, promoted a piece of disinformation about the Director of Transparency International - Georgia, Eka Gigauri. In particular, as stated by Mr Kobakhidze, Eka Gigauri called on the public to invade Tskhinvali in light of the events unfolding after the Russian invasion of Ukraine.

Later, Irakli Kobakhidze showed a collection of statements on 15 June 2022 which he claimed “proves the propaganda of war by the radical opposition, NGOs and TV channels*” in order to substantiate his statement vis-à-vis Eka Gigauri. He quoted part of Eka Gigauri’s statement made on 23 March 2022 in order to further confirm the accuracy of his statement: “One of these is Eka Gigauri’s statement which I will read and you can judge for yourself what she was saying and how she is stepping back now: ‘Russia losses the war in Ukraine. There, it does not have enough resources and cannot launch military actions in every direction. We have to do everything to make use of this window of opportunity.’” Similar to Irakli Kobakhidze, Sozar Subari also blamed Eka Gigauri for propagating war.

First, of note is that Irakli Kobakhidze’s claim that Eka Gigauri was calling for “invading Tskhinvali” is fake news. There is not any publicly available source that would confirm such statement from Ms Gigauri. The absurdity of Irakli Kobakhidze’s statement is further attested to by the fact that the ruling party chairperson failed to corroborate his statement and actually show Eka Gigauri’s statement where she was calling for invading Tskhinvali. Instead, Mr Kobakhidze unveiled a part of Ms Gigauri’s statement where she says that Georgia should use the window of opportunity which emerged as a result of Russia’s invasion of Ukraine. It is with making reference to this statement and disregarding the full statement and the context that Irakli Kobakhidze tries to mislead the public and discredit the NGO sector.

In fact, this quote provided by Mr Kobakhidze is merely an excerpt from Eka Gigauri’s statement where she speaks about Georgia using an opportunity for Western integration. Below is the full text of the statement:

Eka Gigauri – “Russia loses the war in Ukraine, it does not have enough resources and it cannot launch military actions in every direction. Therefore, we have to do everything to make use of this window of opportunity and show the West that we are standing with them.”

“Intimidation is wrong, there is no danger, because Russia loses the war in Ukraine, it does not have enough resources and it cannot launch military actions in every direction. Therefore, we have to do everything to make use of this window of opportunity and show the West that we are standing with them” – Eka Gigauri, Director of Transparency International - Georgia stated when speaking about the position of the Government of Georgia vis-à-vis Russia’s aggression in Ukraine.

Ms Gigauri also added that the Government of Georgia should not frighten people with the war but “do its best instead to show new perspectives and unite the public as much as possible” and every discussion which seeks to prevent us from standing with the West is in Russia’s interests.

Eka Gigauri also stated: “Georgia can have unprecedented support from the West because the West has always considered us as partners and today we have to affirm all of this. There are threats, of course, but these are not threats which the government speaks about today. The main threat is that we may not use this window of opportunity, have a wrong discussion, make wrong decisions, remain divided, the government does not speak to the people and it does not think what steps should be made. Russia loses the war in Ukraine and there is unity among the West’s developed countries to do everything to destroy Putin’s regime. When something like this happens, new opportunities emerge for Georgia, including ones in terms of European and NATO integration. It is vital that we make the right steps in such a period. Our government and our people should stand with the West and there should not be question marks concerning this. We have to plan what we have to do for rapid integration with the EU. It also very important to make sure that the public is aware of the dangers the country faces and what the government does to respond to these dangers. To this end, it is important to have a national security council session in a broader format which the opposition parties as well as the president and ruling party will attend together.”