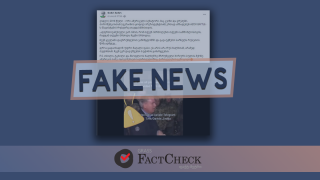 On 30 May 2022, the Sinamdvileshi Facebook page, created by the Georgian Dream’s Department of Communications, published a manipulative publication about Davit Berdzenishvili, entitled “Another Falsehood of the Republican Party.”

The publication of the aforementioned Facebook page is about a broadcast aired on TV Pirveli on 26 May 2022 where Davit Berdzenishvili talked about Georgia’s EU integration process. The Sinamdvileshi Facebook page offers an incomplete quotation from Mr Berdzenishvili and claims that such statements from the opposition are testament to their aspirations that Georgia should not be granted EU membership candidate status under the Georgian Dream’s government.

Davit Berdzenishvili made the following comment (from 12:20): “Today, we do not deserve candidacy, similar to North Macedonia, Albania and other Western Balkan countries – Montenegro, for example – which were also not deserving of candidacy but they worked their way up gradually. I do joke sometimes that Albania is my hope. Albania is already a NATO member and we do not leg behind them. Although, we have one big shortcoming as there is a bad coincidence of these people being in power. Georgia has never had such a bad government and so inadequate, even from the West’s perspective. Given how our government acts in this situation, granting candidacy would have been giving a reward in advance.”

Davit Berdzenishvili’s quote was disseminated on Facebook in a distorted form. Chairperson of the Republican Party, Khatuna Samnidze, stated that Mr Berdzenishvili has never said that the country does not deserve EU membership candidacy status.

Following Khatuna Samnidze’s statement, the Sinamdvileshi Facebook page made another publication to say that Ms Samnidze’s statement is false and that Davit Berdzenishvili has indeed stated that Georgia does not deserve EU membership candidate status.

In fact, the publication contains Davit Berdzenishvili’s incomplete quotation whilst the footage shows only the first part of his comment where he says: “Today, we do not deserve candidacy, similar to North Macedonia, Albania and other Western Balkan countries were not deserving of candidacy.” The dissemination of this quote without its full context is manipulative and gives the impression that he opposes Georgia’s EU integration and is against granting Georgia candidate status. In fact, Davit Berdzenishvili compared Georgia’s current situation to the past situations of the Western Balkan countries and stated that those countries at some point also were not deserving of candidacy, although they still managed to get the status. In his comments with TV Pirveli, Mr Berdzenishvili expressed his full support of Georgia’s EU integration and criticised the Georgian Dream for its policy and steps taken.

On the ground of the manipulative and doctored excerpt from Davit Berdzenishvili’s interview, the Sinamdvileshi Facebook page “exposes” Khatuna Samnidze’s lies, on the one hand, and blames members of the opposition party for putting the country’s interests behind their own, on the other hand.