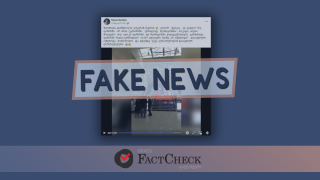 Disinformation: There is a Nazi symbol in a Kyiv shopping centre which indicates that Ukraine is neo-Nazi

On 2 May 2022, Facebook user Mano Beridze published footage which shows a Nazi swastika on the stairs of one of Ukraine’s shopping centres. The author of the publication, drawing on that footage, wrote that Ukraine is a neo-Nazi state: “What can I say – if fascism and Nazism was so acceptable for some, what did we have against German fascism?” This footage has been actively disseminated by different Facebook users through the platform (link 1, link 2, link 3).

In fact, the aforementioned footage was recorded in a Kyiv shopping centre in 2019. The investigation confirmed that the Nazi symbol appeared for a certain period of time as a result of hacker attacks, unbeknownst to the shopping centre’s administration. Of note is that use and dissemination of Nazi symbols is prohibited in Ukraine and punishable by the country’s criminal code.

The local Prosecutor’s Office launched an investigation on the ground of a crime envisioned by Section One of Article 436 of the Criminal Code of Ukraine and the identity of perpetrator was discovered in July 2019. The convict was a 17-year-old boy who took advantage of the malfunctioning of the shopping centre’s computer system.

Of note is that on 24 February 2022, Putin stated that the goals of the full-scale war, which he calls a “special operation,” are to “protect the population from genocide as well as denazify and demilitarise Ukraine.” However, an active campaign to discredit Ukraine launched as early as 2014 when Russia annexed Crimea and started the war in Donbas. The main objective of the Kremlin’s propaganda is to portray Ukraine as a “nest of neo-Nazis” and a “country of thugs” to his own citizens and the international community.

Despite the Kremlin’s attempt, there is a clear consensus among the world community on this issue – Ukraine has nothing to do with the Nazi state image invented by the Russian propaganda and this is proven by statements from a number of high-ranking European and American politicians as well as the surveys of influential media outlets. Allegations of Ukraine’s anti-Semitism by Russian propaganda are used to accuse Ukraine of being Nazi, although neither historians nor victims of Nazism – first of all Jews – agree to this claim.

President of Ukraine, Volodymyr Zelensky, who often underlines his Jewish origins, stated: “You are told we are Nazis. But could a people who lost more than eight million lives in the battle against Nazism support Nazism?”

According to the German Ambassador to Israel: “Putin calls Nazism anything democratic. I sincerely apologise to Ukraine’s brave Jewish president.”

Of important note is that according to the Pew Research Centre’s 2018 survey, Ukraine has the least anti-Semitic sentiments among Central and Eastern European countries.

Therefore, the claim that a Nazi symbol in a Kyiv shopping centre which appeared for a short period of time as a result of a hacker attack in 2019 speaking of Ukraine’s Nazism is not true. At the same time, the dissemination of this footage on Facebook simultaneously with Russia’s unjustified invasion of Ukraine and the ongoing indiscriminate attacks serves to underpin Russia’s absurd argument that the invasion of Ukraine was needed in order to “demilitarise and denazify” the country.