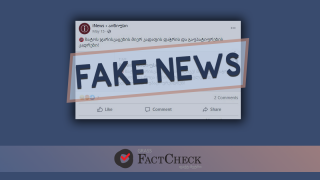 The iNews Facebook page made a publication with the following caption: “Footage of NATO Troops Wounding and Raping Gaddafi!”

This information is not true.

In 2011, NATO launched a military intervention, authorised by the United Nations Security Council (UNSC), to stop the Libyan dictator, Muammar Gaddafi’s, attacks against his population in the Libyan civil war. The UNSC resolution #1973, adopted on 17 March 2011, authorised all necessary measures to protect civilians in Libya and enforce an arms embargo on top of the deployment of occupier forces. In line with that resolution, Libyan airspace was declared as a no-fly zone and more stringent sanctions were imposed. Despite pledges from Libya’s ruling regime, they did not observe a ceasefire as demanded by the UNSC resolution As a result, NATO’s air forces started to carry out airstrikes authorised by the UNSCE resolution #1973 from 19 March 2011. The objective of NATO’s operation was to protect peaceful civilians and areas populated by peaceful civilians from attacks and threats of attacks.

At the start of the Libyan civil war, Muammar Gaddafi’s forces took the upper hand and Gaddafi himself was saying that he would destroy all of the “cockroaches” and the “rats” who took up arms against him. His forces carried out indiscriminate bombing of civilian areas and detained thousands of protesters. However, the battleground situation was altered after NATO’s intervention and Gaddafi’s forces found themselves encircled and isolated in the port town of Sirte.

Rebels launched a fierce assault against the town. In order to escape their indiscriminate attacks, Gaddafi was changing positions together with his entourage and taking shelter in abandoned houses. On 20 October 2011, Mutassim Gaddafi, the son of Muammar Gaddafi and who was in command of the defence of Sirte, ordered Gaddafi’s entourage and local civilians to leave Sirte’s second district because it was under attack. They were trying to leave the district with a column of 50 heavily armed vehicles.

However, the escape attempt ended in failure – the column was hit by a missile launched from a NATO drone which destroyed one vehicle. After several hundred metres, the column was ambushed by the Misrata militia (rebels) and the column was later bombed by NATO aviation, killing many of Gaddafi’s fighters as a result. Some of Gaddafi’s fighters who survived became engaged in the fight with the militia whilst some of them ran away. However, the Misrata militia caught up to the fleeing troops, detained them and treated them ruthlessly, killing some of the captives. Militia fighters found Gaddafi and his close entourage close to the scene when one of Gaddafi’s guards threw a grenade at the militia which hit a concrete wall and exploded near Gaddafi’s retinue, killing Gaddafi’s Minister of Defence and inflicting a shrapnel wound to Gaddafi and others. Afterwards, Gaddafi was captured by the Misrata fighters who beat him and wounded him multiple times. Eventually, Gaddafi was placed in an ambulance and sent to Misrata, although at that time his body was already lifeless. The precise moment and the cause of Gaddafi’s death is not known – violence, a shrapnel wound or being shot with a bullet afterwards.

In any case, Gaddafi was tortured/fell victim to violence by rebel fighters and he was not killed by NATO fighters. Of note is that within the scope of the intervention in Libya, NATO did not deploy boots on the ground and, therefore, NATO troops could not possibly have killed/wounded and raped Gaddafi. In addition, iNews itself published a piece of footage from Skynews which says that Gaddafi was killed by the rebels and nowhere in the video does it claim that this was committed by NATO troops.

Therefore, the information that NATO troops wounded and raped Gaddafi is fake news.