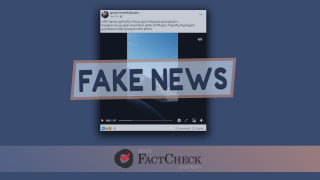 Disinformation: The West robs war-torn Ukraine – They are taking away thousands of tonnes of grain exactly the same as the Nazis did from the USSR during the war.

The following information was disseminated through Facebook: “The West does nothing but robs war-torn Ukraine. They are taking away thousands of tonnes of grain exactly the same as the Nazis did from the USSR during the war.” The publication includes footage which shows line of trucks. The author of the footage says that the trucks are headed to Moldova and this situation very much resembles 1941 when Hitler took grain from the USSR (including from Ukraine) and now Europe does the same.

The information that the West robs Ukraine and takes away wheat/grain from it is a lie.

In fact, Ukraine is one of the major exporters of wheat and grains in the world. After Russia’s invasion of Ukraine, Moscow blocked Ukraine’s seaports and, therefore, Ukraine cannot export these products by sea. In the previous years, Ukrainian wheat and grain were largely exported through maritime routes. Prior to Russia’s war against Ukraine, Ukraine was exporting five million tonnes of grain per month by sea whilst around 90% of Ukraine’s total food exports was carried out by sea.

Halting the export of Ukrainian products because of the blockade of Ukrainian seaports has sparked a global food crisis which may followed by mass hunger in certain countries, particularly in some African nations. On the other hand, the export of these products is also vital for Ukraine’s economy.

At this moment, Ukraine has 40 million tonnes of grain stored for export. Half of this volume should be exported in July to make room in the storage facilities for the new harvest. In addition, the export revenues for Ukraine’s war-torn economy are also crucial. In the past years, 75% of Ukraine’s total wheat production was exported and accounted for 20% of the country’s export revenues. According to the statement of Ukraine’s Minister of Agriculture, the country has already lost USD 9 billion this year in agricultural revenues.

The European Union drafted a strategy to help Ukraine export its wheat. The strategy implies wheat export by railway and trucks, although this has some logistical problems and the EU’s strategy envisions the mobilisation of as much export resources (rail cars, trucks, containers, etc.) as possible alongside logistical assistance. In addition, trucks loaded with Ukrainian wheat will undergo simplified border crossing procedures and Ukraine’s agricultural products will be given a priority at customs checkpoints.

As stated by the European Commissioner for Transportation: “Twenty million tonnes of grain should be exported from Ukraine in less than three months using the EU’s infrastructure.”

Ukraine has already started export with the EU’s assistance, including the use of routes through Moldova by rail transport and trucks. Ukraine even adopted temporary restrictions on wheat exports by railway to Moldova and Romania as many rail cars amassed at the border. However, rail is only a fraction of the export capacity of Ukraine’s Black Sea ports. In addition, Ukraine’s railway transport is not compatible with most of the EU countries’ railway network and it is necessary to reload wheat onto new rail transport or trucks at the Ukrainian border. This causes delays at the borders (which became visible when Ukraine had to adopt temporary restrictions). Therefore, the mobilisation of trucks for the uninterrupted export of wheat has become even more important.

At the same time, wheat is being stolen from Ukraine by Russia and not the West. In particular, the Russian army stole a large amount of Ukraine’s grain together with high-tech grain production equipment valued at least USD 5 million. The GPS trackers installed on that equipment showed that some of the stolen hardware (tractors) was taken to Grozny, Chechen Republic. However, the equipment had anti-theft software and Ukraine remotely switched off the equipment. Therefore, the equipment would not work when the thieves tried to use it. However, they are still able to “hack” the equipment’s software or sell the parts.

In addition, Russia shelled farms and warehouses. For instance, equipment, premises and 17,000 tonnes of grain were destroyed on one farm in the Luhansk district as a result of Russian shelling. Theft of wheat and equipment in Ukraine has rekindled memories of the “Holodomor” committed by the Soviet authorities which claimed the lives of at least four million people.

Therefore, information that the West robs Ukraine and takes away wheat similar to Nazi Germany is a lie. In fact, Ukraine was exporting wheat before the war and was in fact one of the largest exporters. Russia’s blockade of Ukrainian sea ports during the war has rendered the use of maritime export routes impossible which meant switching to transporting wheat by rail and trucks (including to Moldova as shown in the video). Therefore, the process shown in the footage is not stealing the grain but Ukraine selling it abroad which is a significant element of the country’s economy and export and which was taking place before the war. This means the West is helping Ukraine to export and sell its wheat. Therefore, the aforementioned information circulating through Facebook is fake news.