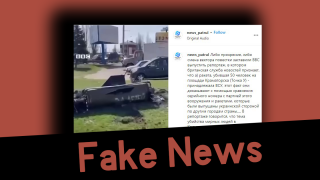 Disinformation: The BBC admitted that Ukraine carried out a strike against Kramatorsk

After launching its invasion of Ukraine, the Kremlin promptly intensified its information warfare and research laboratories in Ukraine have become targets of disinformation.

Fake footage (together with photographs with footage and textual content of the footage), wrongly claiming that the BBC published information to admit that the strike on the Kramatorsk railway station, which claimed 57 lives, was carried out by Ukraine, was disseminated in social networks (for instance see link 1 and link 2). In particular, according to false BBC reporting, the serial number of a Tochka-U missile found near the Kramatorsk railway station coincided with the numbers of the missiles which are in the weaponry of the Ukrainian Armed Forces’ 13th Missile Brigade and is the same type of missile (with the same serial number) which the Ukrainian military had already used to bomb Khartsyzsk, Logvinovo, Berdyansk and Melitopol.

In fact, the BBC has not released footage containing this information. Moreover, the BBC News Press Team published a statement on their official Twitter account to deny this information: “We are aware of a fake video with BBC News branding suggesting Ukraine was responsible for last week’s missile attack on the Kramatorsk train station. The BBC is taking action to have the video removed. We urge people not to share it and to check stories on the BBC News website.”

The BBC has published an article about the attack on Kramatorsk, although it never mentions that Ukraine is responsible for the attack or the missile’s serial number coincides with the serial number of Tochka-U missiles currently among the weaponry of the Ukrainian Armed Forces. According to the article, BBC journalists found traces of cluster munitions on the ground. According to the BBC, the Tochka-U short-range single warhead ballistic missile can be fitted with a cluster warhead that carries 50 bomblets. The BBC also says: “There is evidence that Russia has previously deployed these missiles in the current conflict, although Ukraine also has this weapon in its arsenal (the 2008 Convention on Cluster Munitions prohibits the use of these weapons but Russia and Ukraine are not signatories to the treaty). According to the article, Russia previously denied using it in the Donetsk and Luhansk regions of Ukraine, but these claims are disputed.”

The BBC article, published on the same day when Kramatorsk was attacked, dismisses the claim of the Russians that they have stopped deploying Tochka-U missiles.

FactCheck has written previously about the Russian disinformation concerning the attack on Kramatorsk.

The Russian Ministry of Defence did not claim responsibility for the attack and blamed Ukraine for shelling. According to the statement of the Russian Ministry of Defence, leaving aside the fact that Russia had not carried out the attack on Kramatorsk on 8 April 2022, the Tochka-U tactical missiles (remains were found at the place of the strike) are in fact only in the weaponry of the Ukrainian Armed Forces.

It was initially reported that an Iskander type ballistic missile hit Kramatorsk. Later, it was confirmed that a Tochka-U missile was in fact used to bomb the Kramatorsk railway station where civilians awaited evacuation. This was confirmed by the President of Ukraine, Volodymyr Zelenskyy. The picture of the missile’s remains from the scene was disseminated and based on various assessments it is indeed a Tochka-U missile. For instance, Elliot Higgins, Founder and Creative Director of Bellingcat, the highly reputable investigative journalism platform, also confirmed this.

Other organisations also repute the Russian claim that they do not use Tochka-U missiles. For instance, Russia used Tochka-U as early as 24 February 2022 when the Vuhledar hospital was shelled in the Donetsk region (as a result, four civilians were killed and ten were wounded). This was confirmed by the authoritative international NGO, Amnesty International. According to the information of the Ukrainian Ministry of Defence, Tochka-U missiles were also used on 19 March 2022 in the Luhansk region and one of them was shot down by the Ukrainian air defence systems.

Therefore, the claim of the Russians that Ukraine is responsible for attack on Kramatorsk is fake news. In the same vein, footage promoted under the name of the BBC where it ostensibly admitted there is evidence that would prove Ukraine being responsible for the attack is also fake.

UPDATE: Russian propaganda also claims that the serial number of the Tochka-U missile used for striking Kramatorsk confirms that the missile belongs to Ukraine. However, this Russian propaganda claim is also untrue. In particular, researchers noted that the 9M79-1 marking on the missile which hit the Kramatorsk railway station indicates that missile is of the Tochka-U class (SS-21 Scarab according to NATO’s categorisation). However, it is impossible to identify that the missile was owned by the Ukrainian military with the serial number Ш91579 since this is a factory marking and not that of a military unit. These markings are for factories where these missiles were produced in the Soviet Union and then supplied to different countries, including Kazakhstan, Russia, Belarus and Ukraine. Currently, there are eight countries which operate Tochka-U missiles. According to the logic of the Russian media, a missile with a similar marking could have also been fired from Belarus.