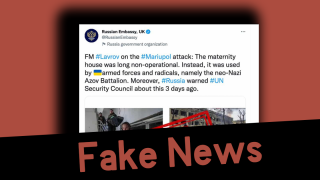 Disinformation: Russian military did not carry out airstrikes against Mariupol hospital

The Kremlin-controlled Russia’s Channel One and other purveyors of Russian propaganda promoted information where they deny that Russia carried out an air assault against the Mariupol maternity hospital. In particular, they released footage featuring Mariana Vishegirskaya, a pregnant woman who was injured as a result of bombing the Mariupol maternity hospital, which was recorded after the incident. The exact location where Russia’s Channel One footage was recorded is unknown. However, Ms Vishegirskaya is reportedly in the Donetsk region which is separatist-held territory. The Ukrainian media reported that the Russians abducted Ms Vishegirskaya and took her to this territory under their control despite the pleas from her relatives to let her and her new-born baby go to Ukraine-controlled territory. The Ukrainian media also reported about possible plans to use Mariana Vishegirskaya for propaganda purposes. Apart from Ms Vishegirskaya, the Russians abducted, took prisoners and transferred thousands more citizens to Russia (including over 2,300 children) as they were trying to flee Mariupol. The interview aired on Russia’s Channel One confirmed the statement of the Ukrainian side that Mariana Vishegirskaya’s transfer to Russian-controlled territory would be followed by using her for propagandist aims.

In the footage published by Russia’s Channel One, Mariana Vishegirskaya says that the hospital was not targeted by airstrikes since nobody heard any noise indicating an aircraft dropping a bomb. Instead, she claims that there was a different type of explosion (which happened twice). In addition, Russia’s Channel One concocts the broadcast in a way so as to indicate that the Mariupol maternity hospital was bombed by the Ukrainians themselves.

According to Chris Cobb-Smith, himself a weapons expert, many weapons experts agree that a crater of this size, measuring two stories deep, was undoubtedly caused by an air-dropped munition which should weigh at least over 454 kilograms. The Truth Hounds, a Ukrainian group that has been documenting war crimes since 2014, said that the size of the crater was consistent with at least a 500 kg bomb.

Despite Russia’s claims, no evidence has been found to confirm that the Mariupol hospital was used by the Azov battalion for military purposes. The Embassy of Russia in Israel published a photograph where a tank is standing in front of the building and sought to implicate the Azov battalion for using the Mariupol hospital based on this photograph. However, Bellingcat verified the photograph published by the Embassy of Russia in Israel and concluded that a building seen in the photograph is actually located some 10 kilometres away from the hospital.

International media believes that the aforementioned footage is part of Russian propaganda and writes that it contributes to the dissemination of false information about the bombing of the Mariupol maternity hospital (for instance, see the Telegraph, Washington Post, METRO, Associated Press, etc.).

As reported by the Associated Press, testimonies of eyewitnesses and footage recorded by the Associated Press (AP) are evidence of airstrikes since the sound of aircraft is audible prior to the explosion and a two-story steep crater appears afterwards. A police officer and a soldier who were interviewed on site said that the attack was an airstrike. At the moment of the explosion, AP correspondents were in a different part of Mariupol and they heard the aircraft first and then two explosions afterwards. Later, they climbed up to the 12th floor of a nearby building and noticed two spots from where thick black smoke was coming. It took 25 minutes for them to finally reach the hospital whilst Russian propaganda sources claim that the attack was staged and that reporters were already in place.

In a footage released by Russia’s Channel One, Mariana Vishegirskaya provides an inaccurate account of her conversation with AP journalists. In particular, she says that she told the AP that she did not want to be recorded, although AP journalist recordings of the interaction with her undermine her claims. AP footage shows the journalists’ first meeting with her where she is covered with a tartan and looks straight into the camera. AP reporter, Mstislav Chernov, asks her how she was doing and she answers that everything was fine and that she was feeling well. At this time, Ms Vishegirskaya was aware she was being recorded and made no hint whatsoever to make it clear that she did not want to be recorded. AP reporters stated both she and her husband have not indicated that they were against the recording or giving an interview when they spoke on 11 March 2022, a day after the couple became parents. In regard to the details of bombing the hospital, Mariana Vishegirskaya stated in front of AP cameras that she herself had not seen where the building was hit or by whom. She also added that there were a lot of rumours but she was not in a position to say anything.

Mariana Vishegirskaya’s statement, which she made with Russia’s propaganda media, also contradicts Russia’s claims made in the aftermath of the bombing. For instance, the Embassy of Russia to the UK wrote about her pictures taken and released by the AP after the bombing of the maternity hospital and stated that they were fake whilst Ms Vishegirskaya was posing for the bombing with make-up. The Embassy of Russia to the UK (together with the Russian ambassador to the Netherlands and other mouthpieces of propaganda in social media) also claimed that she was a paid actress. Sergey Lavrov, the Minister of Foreign Affairs of Russia, claimed that the maternity hospital was no longer functional during the bombing and that it was used by the Ukrainian military radicals; in particular, by the “neo-nazi” Azov battalion. Three days before that, Russia stated the same at the UNSC session. Of interest is that Russia’s Ministry of Defence spokesperson stated that the Russian forces did not carry an airstrike against the hospital.

Twitter removed the aforementioned false statements released by the Embassy of Russia in the UK. Therefore, the Russians decided that Mariana Vishegirskaya’s new interview was a reliable source despite the fact that it contradicted their previous versions, including the ones that she was a paid actress and that she was not really injured.

Given all of the aforementioned circumstances, this information promoted by Russia’s Channel One is fake news.