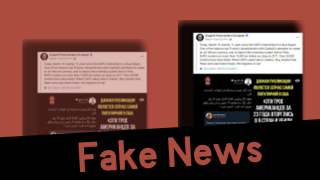 Disinformation: In 2011, over 50,000 civilians were killed as a result of NATO airstrikes in Libya

On 19 March 2022, Andrei Nikolayevich Bocharov published the following information about NATO’s operation in Libya in 2011: “Today, 19 March 2022, marks exactly 11 years since the beginning of NATO’s intervention in Libya. One of the reasons behind this intervention was the dissatisfaction of France over Gaddafi’s attempts to create a Pan-African currency and replace the Paris-linked monetary system. NATO carried out over 100,000 airstrikes in Libya in 2011, killing more than 50,000 peaceful civilians. When NATO was asked about the peaceful population, they claimed it was a collateral damage which happens in war.”

In 2011, NATO launched a military intervention, authorised by the United Nations Security Council (UNSC), to stop the Libyan dictator, Muammar Gaddafi’s, attacks against his population in the Libyan civil war. The UNSC resolution #1973, adopted on 17 March 2011, authorised all necessary measures to protect civilians in Libya and enforce an arms embargo. In line with that resolution, Libyan airspace was declared as a no-fly zone and more stringent sanctions were imposed. Despite pledges from Libya’s ruling regime, they did not observe a ceasefire as demanded by the UNSC resolution. As a result, NATO’s air forces started to carry out airstrikes authorised by the UNSCE resolution #1973 from 19 March 2011. The objective of NATO’s operation was to protect peaceful civilians and areas populated by peaceful civilians from attacks and threats of attacks.

According to NATO’s information which they released to Lead Stories, the American fact-checking organisation: “NATO air forces fired around 7,600 air-to-surface bombs and missiles during the conflict.” In addition, as stated by NATO: “This was the first air campaign in history where only precision-guided munitions were used.” This significantly minimised the risk to civilians.

The International Commission of Inquiry on Libya underlined that NATO conducted a highly precise campaign with a demonstrable determination to avoid civilian casualties. However, the massive air campaign to protect civilians from the Gaddafi regime still resulted in some civilian casualties and a UN commission confirmed civilian casualties in a limited number of cases. Of the 20 cases studied by the Commission, air raids killed at least 60 civilians. However, according to Airwars, [1] this figure could be higher. Airwars analysed open-source information to produce assessments of civilian casualties during the 2011 Libyan civil war. According to its estimates, NATO coalition airstrikes led to the deaths of at least 223 and at most 403 civilians (at least 50 and at most 113 rebel forces as well as at least 869 and at most 1,999 from Gaddafi loyalists).

In addition to the UN’s Commission, British Army Major General, Rob Weighill, who was the head of operations of the Combined Joint Task Force during the conflict stated that NATO carried out its own six-month internal review of alleged cases of civilian harm. On one or two occasions, they found misfires but they concluded that their actions were justified for the other events which caused civilian casualties, including the Majer attack where 34 civilians were killed as a result of double-tap strike according to the UN’s conclusions. According to Major General Weighill, the second NATO attack in Majer was also justified, since it was still operating as a command and control bunker. However, NATO had no mechanisms for measuring civilian harm for the airstrikes during the campaign. Therefore, Major General Weighill says that they would not have precise information about civilian casualties as a result of their airstrikes; however, he believes that civilians were probably killed.

According to Human Rights Watch’s 2012 report, NATO air strikes killed at least 72 civilians, one-third of them children under the age 18 years, whilst Amnesty International reports that 55 civilians, including 16 children and 14 women, were killed in airstrikes. However, this figure is at least 40, although could be over 70 according to the New York Times.

Of note is that only a fraction of people slaughtered by Gaddafi’s forces were killed by artillery shelling or airstrikes. This indicates that NATO’s decision to destroy Gaddafi’s heavy weaponry and impose a no-fly zone significantly undermined Gaddafi’s capacity to commit violence against peaceful civilians. This, logically, reduced the number of civilian casualties.

NATO’s air raids in Libya indeed caused civilian casualties. However, this was not a result of NATO deliberately targeting civilians or indiscriminately bombing towns. On the contrary, NATO used only precise munitions to minimise civilian casualties. The figure of civilian casualties, based on multiple investigations, is much lower and the highest estimate is 500 people. Therefore, information in the social network is false.

[1]An authoritative think-tank which collects, archives, analyses and assesses information and documents about civilian harm in conflict zones and areas of military operations (for instance in Iraq, Syria and Libya).