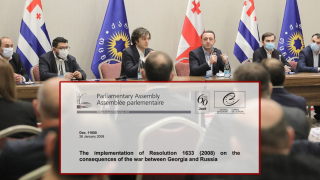 What does the resolution - which the Georgian Dream always uses to discredit their opponents – actually say?

Since the very first day when Russia amassed its troops near Ukrainian borders before the outbreak of war, the government started to push a narrative about Resolution 1633 more robustly. According to this narrative, the CoE resolution blames Georgia for starting the war and those Georgian politicians who took part in that process are also traitors since the Georgian delegation also voted for this resolution.

The Head of the Ajara Autonomous Republic, Tornike Rizhvadze, in reply to a question about who started the Russia-Ukraine war gave the following reply to the journalist: “You should pose this question to the relevant subject matter experts.” After his answer caused a sharp public backlash, Mr Rizhvadze made a Facebook publication where he answered questions addressed to him. At the end of his publication, he once again recalled Resolution 1633: “P.S. It is particularly shameful. Do I have to give a serious answer to provocative questions asked by signatories of the CoE Parliamentary Assembly resolution, the political party which blamed Georgia for starting the 2008 war or their TV channels?

I have a question for them. Who started the war in 2008? It was Russia again, by accident, was not it? If this is true, how did you sign that? Are you traitors by accident because of that, are you not?!”

There have been numerous manipulative statements about the resolution in the past as well. The Georgian Dream officials have brought up this issue multiple times and nearly always in a manipulative manner. In 2022 alone, FactCheck identified dozens of cases of promoting such a narrative. For instance, Givi Mikanadze says: “In autumn [2008], you voted for a shameful resolution where in fact you blamed the Georgian side for starting the war.” Mikheil Kavelashvili also echoes the same narrative: “Do you know what is written? That the Georgian side launched combat actions and Russia was forced to respond. They provided ‘justification’ for Russia’s war at the international level, too.”

The Prime Minister, Irakli Gharibashvili, also made a statement of a similar content: “After the war, I would like to remind everyone that Saakashvili’s government signed the resolution like a capitulation and who did they blame? They blamed Georgian military for starting the hostilities. This is unimaginable treason.” This year at different periods of time, similar statements were made by Aluda Ghudushauri, Archil Talakvadze, Mamuka Mdinaradze and other Georgian Dream heavyweights.

Since the promotion of a false narrative about Resolution 1633 is not a one-off phenomenon but, instead, bears a propagandistic nature, FactCheck decided to once again offer an analysis of this issue.

In fact, nowhere in Resolution 1633 is it written that Georgia started the war. No matter how one should try to interpret any paragraph of the resolution, the resolution unambiguously says that the parties who started the war should be established by an independent and impartial international investigation. Paragraph Eight of the resolution says: “The Assembly believes that truth is a precondition for reconciliation. Since the facts surrounding the outbreak of the war are disputed by both Georgia and Russia, they should be established, in an objective manner, by an independent international investigation. The Georgian authorities have indicated that they would welcome such an international inquiry and the Russian members of parliament have also indicated that they would not object to this proposal. This investigation should not be limited to the outbreak of the war, but should also focus on the years leading up to the conflict. Therefore, no matter how we may try to interpret wording in Paragraph Five, this would be wrong since the resolution says directly and without any interpretation that parties do not acknowledge that they started the war.

Furthermore, FactCheck has already written an article about Resolution 1633. This resolution makes use of “outbreak of war” as a term to denote the start of the war whilst Paragraph Five only speaks about a new level of escalation. Therefore, had Resolution 1633 intended to blame Georgia for starting the war, it would have also used the same term in Paragraph Five instead of using a “new level of escalation.” Therefore, it is clearly understood from the document that the Georgian side does not recognize that it started the war. Accordingly, it is a lie that those members of the Georgian delegation who voted for this text of the resolution blame Georgia for starting the war.

Of note is the content of the entire text, essence and spirit of the resolution. Resolution 1633 is the first document where Russia is referred to as an occupier. In addition, Russia is unequivocally held responsible for aggravation and failure to avoid the conflict. The Resolution’s Paragraph Four names 7 August 2008 as the date of the outbreak of the war, although it is stressed that it was preceded by significant escalation, a deterioration of the security environment and the use of military force having become an option for the parties. In particular, Paragraph Four says: “It is of the view that in the end, the peacekeeping format proved that it could not fulfil its intended function and that the peacekeepers did not succeed in their mission to protect the lives and property of the people in the conflict area. It [CoE Parliamentary Assembly,] therefore, regrets that earlier calls to discuss a change in the format of the peacekeeping and conflict resolution process were rejected by South Ossetia and Russia.”

The rest of the Resolution’s text is full of criticism against Russia. For instance, Paragraph Seven criticises the policy of the Russian authorities to protect their citizens abroad, condemns the recognition of the independence of Abkhazia and South Ossetia and expresses support for Georgia’s sovereignty and territorial integrity.

More important is Paragraph 13 where Russia is, in fact, referred to as a party responsible for ethnic cleansing: “The Assembly is especially concerned about credible reports of acts of ethnic cleansing committed in ethnic Georgian villages in South Ossetia and the ‘buffer zone’ by irregular militia and gangs which the Russian troops failed to stop. It [CoE Parliamentary Assembly] stresses in this respect that such acts were mostly committed after the signing of the ceasefire agreement on 12 August 2008 and continue today.” This, in fact, refers to the CoE Parliamentary Assembly’s recognition of the ethnic cleansing on territories under effective Russian control

At the end of the Resolution, the Parliamentary Assembly calls on its member states not to recognise the independence of South Ossetia and Abkhazia, intensify their efforts to provide humanitarian assistance, focus on the immediate needs of displaced persons and formally condemn the ethnic cleansing taking place in the areas under control of Russian forces and of the de facto authorities in South Ossetia.

Paragraph 30 says that dialogue is the best way forward for the solution of conflict and both sides need to demonstrate political will to this end. He Council of Europe believes that there are some basic conditions for fully implementing a peace plan and dialogue, including the withdrawal of the Russian troops to positions ex ante the conflict whilst it also says that the deployment of European Union and OSCE observers in South Ossetia and Abkhazia and the withdrawal by Russia of the recognition of the independence of South Ossetia and Abkhazia would be “minimum conditions for a meaningful dialogue.”

Therefore, a full overview of the document brings to light that Resolution 1633 does not portray Georgia as the party who initiated the 2008 August war. The Georgian side does not recognise that it started the war and the responsibility for refusing attempts to avoid the conflict is put on Russia. The document says that facts committed in territories under effective Russian control are assessed as ethnic cleansing.

The Ukraine crisis started in December 2021 when Russia started an unprecedented mobilisation of its armed forces near Ukrainian borders under the pretext of regular drills. The looming conflict has become increasingly clearer and the Georgian political spectrum started more active discussion about the events unfolding in Ukraine. At the same time, members of the political opposition and civil society figures started to call for the Georgian Dream to demonstrate their clear stance. It was in these discussions where the Georgian Dream officials reiterated their positions vis-à-vis Resolution 1633 which – as this analysis demonstrates – are not only wrong but actually harm Georgian interests.

Of additional note is that during the vote for the final draft of the document, 14 out of 15 members of the Russian delegation voted against the document which indicates how troublesome Resolution 1633 is for the Russian side. Given these factors, it is even more confusing since nowhere in Resolution 1633 does it say that Georgia started the war and allegations against the opponents that they signed an acknowledgement of Georgia’s starting the war is not true.