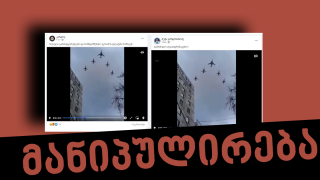 On 24 February 2022, footage of military aircraft was shared widely through Facebook. This footage was published by theCardhu Facebook page by Alt-Info anchor, Nikoloz Mzhavanadze, and blogger, Beka Vardosanidze, with different captions. Given the content of the captions, footage was recorded in Ukraine and showed Russia’s military jets bombing Ukraine. In fact, this particular video is footage from the rehearsal of a military parade dedicated to the 2020 Victory Day.

Therefore, specific cadres do not show Russia’s air attack against Ukraine but a rehearsal of Russia’s 2020 military parade near Moscow. This video is easily accessible from different YouTube pages entitled “Parade Rehearsal 05/04.2020. Air component. Aircraft flight above Tushino.” Therefore, the footage was recorded during the rehearsal of a military parade in 2020 dedicated to Russia’s victory in the Second World War and has no relation whatsoever to the 2022 events.

BBC also commented on the rehearsal of the military parade for 9 May 2020: “Rehearsal of the air component of the Victory Parade was held in Moscow. Despite rainy weather, more than 70 fighter jets and helicopters flew above the Russian capital.”

Therefore, the footage disseminated through Facebook was not recorded in Ukraine in 2022 but in Russia in May 2020 showing the preparation process of a military parade in Russia.