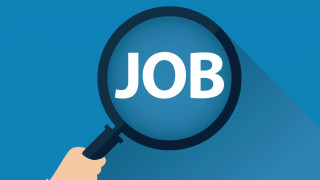 In the first nine months of 2021, the budget of labour remuneration for contract workers increased by 22% as compared to the same period of the previous year

According to the decision of the Government of Georgia, the official salaries for people employed in the public sector will increase by 10% from 1 January 2022 and GEL 117 million will be spent from the budget to this end

According to the first submission of the draft budget, a total of GEL 1,653,356,800 was envisioned for labour remuneration and the number of public servants was 112,712. In the second submission of the draft budget, the amount of funds intended for labour remuneration was already GEL 1,830,014,800 which was attributable to the aforementioned decision. However, of note is the fact that the number of employees in the new draft increased by 40 and is now 112,752.

Whilst speaking about the number of public servants and official salaries, of particular interest has always been the number of contract workers and their labour remuneration.

According to the Law of Georgia on Remuneration in Public Institutions, a contract worker is an individual who is appointed to or accepted for work under on the basis of an employment contract for a certain period of time in order to accomplish non-permanent tasks (Article 8).

The employment of contract workers, as opposed to permanent workers (who are mostly appointed after undergoing a selection competition), involves relatively easier procedures which increase the probability of nepotism and politically-motivated appointments.

Since we only have a nine-month budget execution report, we have to take the other nine-month periods of the previous years in order to see the trend.

As Table 1 shows, the salaries of contract workers have been rising since 2011, except for 2011 when the salaries actually decreased. This can be explained by the fact that 2013 was the Georgian Dream’s first year in power and since they always scolded the United National Movement for the growth of the number of contract workers, they decided to cut the number and, therefore, the budget of remuneration for contract workers. However, the growth trend was still in place in later years. The years 2012, 2014, 2015, 2020 and 2021 are distinguished in this respect when salary appropriations for contract workers increased by 60%, 65%, 28%, 22% and 22%, respectively.

As mentioned earlier, the budget execution reports do not contain figures about the number of contract workers employed in the entire public sector. However, we can take a look at the number of employees in government LEPLs and NNLEs. To make the figures comparable, we again take the nine-month periods. This figures are only available from 2015 and so we will analyse this particular period.

Graph 1: Number of Contract Workers in Government LEPLs and NNLEs 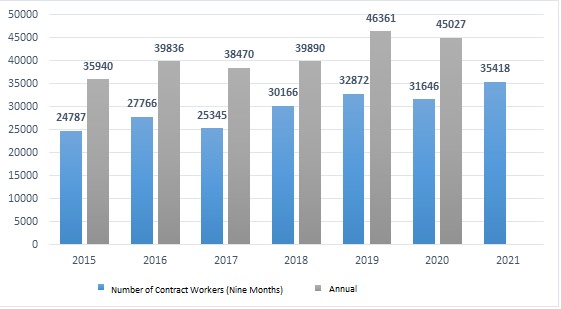 Generally, of mention is that the practice of the last years shows that contract positions are largely occupied by individuals loyal to or affiliated with the ruling party. Their number increases mostly before the elections. There were elections in every year from 2012 to 2021 – in 2015 and 2019 interim elections and in other years, presidential, parliamentary and local self-government elections. Therefore, it is impossible to delineate any correlation between the number of contract workers and the growth of their salary appropriations with the elections in the reporting years.