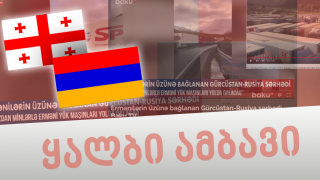 Disinformation: Georgia does not allow Armenian trucks to cross the border

Armenian and Azerbaijani media report that the “Government of Georgia does not allow trucks coming from Armenia to cross the Larsi border check-point.”

The news was reported by the Armenian News.am in the Russian and Armenian languages. Another broadcast on the same issue was aired by Armenian FreeNews. This was followed by a strong criticism from Armenian nationals vis-à-vis Georgia and the Georgian people over this issue. The news report reads: “There is chaos at the Russian-Georgian border as hundreds of Armenian trucks are stranded on the road. Armenian media shows footage of the trucks jammed near the border. According to the Armenian media reports, Armenian trucks are stopped at the border without a reason whilst Turkish, Russian, Kazakh and Georgian trucks cross the border without any hindrance. The drivers express their dissatisfaction vis-à-vis the Georgian side for the slow pace of work and the Georgians, in turn, blame Russia for that. As stated by the drivers, problems related to the queues happen in Russia, too, although there are certain issues which the Georgian side does not address. In addition, the drivers claim that only the Armenian drivers are treated with such indifference.”

Baku TV, one of the TV channels in Azerbaijan with a wide area of coverage, aired a broadcast on 4 October 2021 showing trucks stranded at the Larsi border check-point. The broadcast was produced based on information reported by the Armenian media which is not true. The Azerbaijani-language broadcast is disseminated by Azerbaijani-speaking groups in Georgia under a misleading headline – “Georgia-Russia Border Closed in Armenia’s Face.”

We also note that as soon as the construction work is completed on the side of the Russian Federation, the Kazbegi customs check-point will be operating at full capacity as usual. Therefore, passengers and cargo will be handled smoothly without any delays (for the reason above, the Russian side is unable to receive a continuous flow of international cargo).

In addition, the Revenue Service of the Ministry of Finance would like to inform you that the Kazbegi customs checkpoint operates 24 hours a day and can handle more than 1,000 trucks a day. Furthermore, due to the current situation, the Revenue Service, together with the Patrol Police of the Ministry of Internal Affairs of Georgia, LEPL - Land Transport Agency, and other state agencies, is actively working to eliminate the queues of vehicles for international freight transport in order to determine alternative traffic routes for vehicles transiting from neighbouring countries to the Russian Federation and Central Asia.”

In addition, Armenian trucks are not specifically facing any discrimination. It is true that “as a result of the queues most of the trucks stranded at different Georgian customs checkpoints are Armenian, although Georgian and Iranian as well as Russian, Turkish and other countries’ cargo trucks are also delayed because of this problem.” Moreover, the Embassy of Armenian to Georgia confirmed the information that the delays have been caused by ongoing work at the Larsi customs check-point.