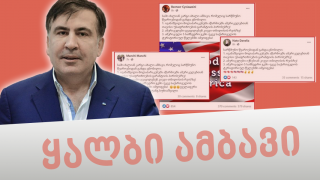 Disinformation is Disseminated Through Social Networks About Mikheil Saakashvili’s Return

1. Ivanishvili has talks with the Americans about conditions of his own security!

2. Americans will escort us on Kyiv-Tbilisi flight!

The Facebook user wrote this within the context of Mikheil Saakashvili’s return to Georgia as the latter announced on 27 September 2021 that he was going to return to Georgia by a Kyiv-Tbilisi flight. The first and second claims of the aforementioned Facebook user have no factual ground. In addition, it is also misleading to link the entrance of five American warships in Georgia’s territorial waters to the issue of Mr Saakashvili’s return. Other Facebook users also posted similar information on Facebook. As of 29 September 2021, these publications have a total of 1,084 reacts, 602 shares and 435 comments.

In fact, the Standing NATO Mine Countermeasures Group 2 (SNMCMG2) vessels, instead of American warships, actually entered Georgia’s territorial waters on 28 September 2021; particularly, the Batumi port. The SNMCMG2 consists of the ships of the Spanish Navy (flagship), the Bulgarian Navy, the Romanian Navy and the Turkish Navy. The visits of NATO maritime units to Georgian ports are of a regular character. This is already the second visit of NATO vessels to Georgia in 2021. The visits of these vessels is one of the tangible results in terms of NATO-Georgian cooperation for strengthening Black Sea security.

Of note is that within the framework of the visit, the Georgian Coast Guard Department and NATO Naval Unit ships will conduct joint exercises in the Black Sea which has no relation whatsoever to Mikheil Saakashvili’s announced return to Georgia. The purpose of the exercise is to increase the interoperability of the Georgian and NATO naval forces and strengthen our country's defence capabilities. In addition, the Coast Guard Department Boarding Teams will also undergo the second stage of the Second Level Assessment (NEL-2) which is the final phase of the four-year assessment process.

Therefore, in fact, these were warships (Spain, Italy, Bulgaria, Romania and Turkey) of the SNMCMG2 and not American vessels that entered Georgia’s territorial waters. The visits of NATO maritime units to Georgian ports are of a regular character and are not linked with Mikheil Saakashvili’s arrival. In addition, other Facebook user claims about the Americans escorting Mr Saakashvili on his way to Georgia and Bidzina Ivanishvili being in talks with the Americans are also unsubstantiated. The aforementioned publication has a conspiracy theory nature which promotes conspiracy in regard to the USA, one of Georgia’s strategic partners and serves to mislead Facebook users.